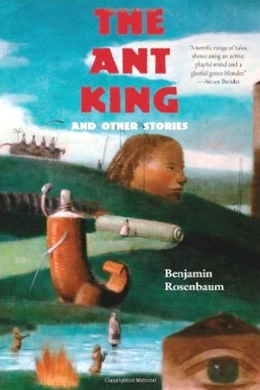 A dazzling, postmodern debut collection of pulp and surreal fictions: a writer of alternate histories defends his patron’s zeppelin against assassins and pirates; a woman transforms into hundreds of gumballs; an emancipated children’s collective goes house hunting.

Sheila split open and the air was filled with gumballs. Yellow gumballs. This was awful for Stan, just awful. He had loved Sheila for a long time, fought for her heart, believed in their love until finally she had come around. They were about to kiss for the first time and then this: yellow gumballs.

Stan went to a group to try to accept that Sheila was gone. It was a group for people whose unrequited love had ended in some kind of surrealist moment. There is a group for everything in California.

After several months of hard work on himself with the group, Stan was ready to open a shop and sell the thousands of yellow gumballs. He did this because he believed in capitalism, he loved capitalism. He loved the dynamic surge and crash of Amazon’s stock price, he loved the great concrete malls spreading across America like blood staining through a handkerchief, he loved how everything could be tracked and mirrored in numbers. When he closed the store each night he would count the gumballs sold, and he would determine his gross revenue, his operating expenses, his operating margin; he would adjust his balance sheet and learn his debt-to-equity ratio; and after this exercise each night, Stan felt he understood himself and was at peace, and he could go home to his apartment and drink tea and sleep, without shooting himself or thinking about Sheila.

On the night before the IPO of gumballs.com, Sheila came to Stan in a dream. She was standing in a kiddie pool; Stan and his brothers and sisters were running around splashing and screaming; she had managed to insert herself into a Super 8 home movie of Stan’s family, shot in the late seventies. She looked terribly sad.

“Sheila, where are you?” Stan said. “Why did you leave me, why did you become gumballs?”

“The Ant King has me,” Sheila said. “You must rescue me.”

Stan woke up, he shaved, he put on his Armani suit, and drove his Lexus to his appointment with his venture capitalists and investment bankers. But the dream would not leave him. “Ant King?” he asked himself. “What’s this about a goddamn Ant King?”

On the highway, near the swamp, he pulled his Lexus over to the shoulder. The American highway is a self-contained system, Stan thought. Its rest stops have video games, bathrooms, restaurants, and gas stations. There’s no reason ever to leave the interstate highway system, its deadness and perfection and freedom. When you do reach your exit, you always have a slight sense of loss, as when awakening from a dream.

Stan took off his shiny black shoes and argyle socks, cuffed his Armani suit pants above the knees, and waded through the squidgy mud and tall reeds of the swamp. He saw a heron rise, flutter, and soar into the midmorning sky. Ant King, Ant King, he thought.

Miles underground, the Ant King was watching an old episode of Charlie’s Angels on cable.

“Stan may come rescue me, you know,” Sheila said.

“I like how you never see Charlie. And how Boswell–is that his name, Boswell?–how he’s kind of a foil and audience for the girls. There’s all this unrealized desire–Boswell desires the girls, but he’s got no chance, and I think they desire Charlie, but Charlie’s invisible.”

Sheila picked at a seam in the orange sofa. “It is possible. He might come rescue me.”

The Ant King blinked and tried to smile reassuringly. “Sure. No, yeah, definitely. I think the two of you are just going through a phase, maybe. You know, it took him a while to deal with, ah, what he’s going through.”

Sheila glared at him. “You are so full of shit!” she said.

The Ant King threw his bag of Doritos at her. “Fine! I was just trying to be nice!” he shouted. “I’m full of shit? I’m full of shit? What about your dorky boyfriend?” He grabbed the remote and changed the channel, showing Stan, sitting in his Lexus with the door open, toweling off his muddy feet. “He’s a lost cause, baby. You want me to respect a guy like that?”

“I hate it here,” said Sheila.

The Ant King smoothed his antennae and took a deep breath. “Okay, I’m sorry about throwing the Doritos. Maybe I overreacted. Okay?”

“Fine,” said the Ant King, savagely snatching up the remote control and turning back to Charlie’s Angels. “Be that way.”

Stan nodded. His feet were still wet, inside his argyle socks. “Yes, gumballs have a lot of, ah, a lot greater significance than just candy.”

Monique paused and looked at Stan brightly, waiting for him to go on. Across the table, the three Credit Suisse First Boston underwriters–Emilio Toad, Harry Hornpecker, and Moby Pfister–sat stone-faced and unreacting in their gray double-breasted suits.