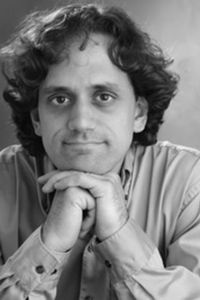 American science fiction, fantasy, and literary fiction writer and computer programmer, whose stories have been finalists for the Hugo Award, the Nebula Award, the Theodore Sturgeon Award, the BSFA award, and the World Fantasy Award. His first professionally published story appeared in 2001. His work has been published in The Magazine of Fantasy & Science Fiction, Asimov’s Science Fiction, Harper’s, Nature, and McSweeney’s Quarterly Concern. It has also appeared on the websites Strange Horizons and Infinite Matrix, and in various year’s best anthologies. The Ant King and Other Stories, a collection of Rosenbaum’s short fiction, was published by Small Beer Press. (source: Wikipedia)

A dazzling, postmodern debut collection of pulp and surreal fictions: a writer of alternate histories defends his patron’s zeppelin against assassins an...read more »

The tale of duelling galactic colony-organisms that are competing to recruit all the matter in the universe for raw computation. For more information, ...read more »