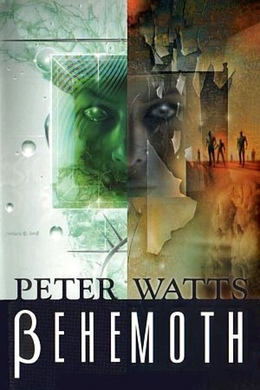 Five years ago you destroyed the world.

The world had it coming.

So you brought back a gift from the deep sea, a doomsday microbe to throw the planet on its side. Now DNA itself is on the way out. North America lies in ruins beneath the thumb of an omnipotent psychopath. Governments across the globe have fallen; warlords and suicide cults have risen from the ashes. All because five years ago, you had a score to settle.

But you’ve discovered something in the meantime: you destroyed the world on false pretenses.

For years now you’ve cowered among the mountains of the deep Atlantic. But you cannot hide forever. The consequences of past acts reach inexorably to the very bottom of the world — and suddenly, even here, there’s no way to take back the body count.

One way or another, you’re about to face the mess you made.

First there is only the sound, in darkness. Drifting on the slope of an undersea mountain, Lenie Clarke resigns herself to the imminent loss of solitude.

She’s far enough out for total blindness. Atlantis, with its gantries and beacons and portholes bleeding washed-out light into the abyss, is hundreds of meters behind her. No winking telltales, no conduits or parts caches pollute the darkness this far out. The caps on her eyes can coax light enough to see from the merest sparkle, but they can’t create light where none exists. Here, none does. Three thousand meters, three hundred atmospheres, three million kilograms per square meter have squeezed every last photon out of creation. Lenie Clarke is as blind as any dryback.

After five years on the Mid Atlantic Ridge, she still likes it this way.

But now the soft mosquito whine of hydraulics and electricity rises around her. Sonar patters softly against her implants. The whine shifts subtly in pitch, then fades. Faint surge as something coasts to a stop overhead.

“Shit.” The machinery in her throat turns the epithet into a soft buzz. “Already?”

“I gave you an extra half-hour.” Lubin’s voice. His words are fuzzed by the same technology that affects hers; by now the distortion is more familiar than the baseline.

She’d sigh, if breath were possible out here.

Clarke trips her headlamp. Lubin is caught in the ignited beam, a black silhouette studded with subtle implementation. The intake on his chest is a slotted disk, chrome on black. Corneal caps turn his eyes into featureless translucent ovals. He looks like a creature built exclusively from shadow and hardware; Clarke knows of the humanity behind the façade, although she doesn’t spread it around.

A pair of squids hover at his side. A nylon bag hangs from one of the meter-long vehicles, lumpy with electronics. Clarke fins over to the other, flips a toggle from slave to manual. The little machine twitches and unfolds its towbar.

On impulse, she kills her headlight. Darkness swallows everything again. Nothing stirs. Nothing twinkles. Nothing attacks.

It’s just not the same.

She remembers a whole different ocean, on the other side of the world. Back on Channer Vent you’d turn your lights off and the stars would come out, a thousand bioluminescent constellations: fish lit up like runways at night; glowing arthropods; little grape-sized ctenophores flashing with complex iridescence. Channer sang like a siren, lured all those extravagant midwater exotics down deeper than they swam anywhere else, fed them strange chemicals and turned them monstrously beautiful. Back at Beebe Station, it was only dark when your lights were on.

But Atlantis is no Beebe Station, and this place is no Channer Vent. Here, the only light shines from indelicate, ham-fisted machinery. Headlamps carve arid tunnels through the blackness, stark and ugly as burning sodium. Turn them off, and…nothing.

Which is, of course, the whole point.

“It was so beautiful,” she says.

She grabs her towbar. “It’s just—it’s not the same, you know? Sometimes I almost wish one of those big toothy fuckers would charge out of the dark and try to take a bite out of me…”

She hears the sound of Lubin’s squid throttling up, invisibly close. She squeezes her own throttle, prepares to follow him.

The signal reaches her LFAM and her skeleton at the same time. Her bones react with a vibration deep in the jaw: the modem just beeps at her.

She trips her receiver. “Clarke.”

“Ken find you okay?” It’s an airborne voice, unmutilated by the contrivances necessary for underwater speech.

“Yeah.” Clarke’s own words sound ugly and mechanical in contrast. “We’re on our way up now.”

“Just…well, be careful, okay?” Patricia Rowan tells her. “You know how I worry.”

The water lightens indiscernibly as they ascend. Somehow their world has changed from black to blue when she wasn’t looking; Clarke can never pinpoint the moment when that happens.

Lubin hasn’t spoken since Rowan signed off. Now, as navy segues into azure, Clarke says it aloud. “You still don’t like her.”

“Because she’s a corpse.” Nobody has called them corporate executives for years.

“Was a corpse.” The machinery in his throat can’t mask the grim satisfaction in that emphasis.

“Was a corpse,” Clarke repeats.