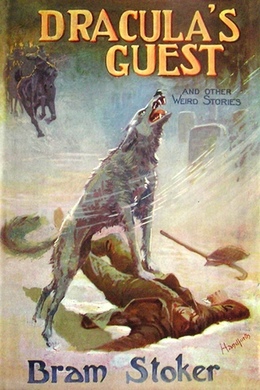 And other Short Stories

“Dracula’s Guest” follows an Englishman as he wanders around Munich before leaving for Transylvania. It is Walpurgis Night, and in spite of the coachman’s warnings, the young man foolishly leaves his hotel and wanders through a dense forest alone. Along the way he feels he is being watched by a tall and thin stranger. The book contains several other short stories; The Judge’s House, The Squaw, The Secret of the Growing Gold, The Gipsy Prophecy, The Coming of Abel Behenna, The Burial of the Rats, A Dream of Red Hands and Crooken Sands.

When we started for our drive the sun was shining brightly on Munich, and the air was full of the joyousness of early summer. Just as we were about to depart, Herr Delbrück (the maître d’hôtel of the Quatre Saisons, where I was staying) came down, bareheaded, to the carriage and, after wishing me a pleasant drive, said to the coachman, still holding his hand on the handle of the carriage door:

‘Remember you are back by nightfall. The sky looks bright but there is a shiver in the north wind that says there may be a sudden storm. But I am sure you will not be late.’ Here he smiled, and added, ‘for you know what night it is.’

Johann answered with an emphatic, ‘Ja, mein Herr,’ and, touching his hat, drove off quickly. When we had cleared the town, I said, after signalling to him to stop:

‘Tell me, Johann, what is tonight?’

He crossed himself, as he answered laconically: ‘Walpurgis nacht.’ Then he took out his watch, a great, old-fashioned German silver thing as big as a turnip, and looked at it, with his eyebrows gathered together and a little impatient shrug of his shoulders. I realised that this was his way of respectfully protesting against the unnecessary delay, and sank back in the carriage, merely motioning him to proceed. He started off rapidly, as if to make up for lost time. Every now and then the horses seemed to throw up their heads and sniffed the air suspiciously. On such occasions I often looked round in alarm. The road was pretty bleak, for we were traversing a sort of high, wind-swept plateau. As we drove, I saw a road that looked but little used, and which seemed to dip through a little, winding valley. It looked so inviting that, even at the risk of offending him, I called Johann to stop–and when he had pulled up, I told him I would like to drive down that road. He made all sorts of excuses, and frequently crossed himself as he spoke. This somewhat piqued my curiosity, so I asked him various questions. He answered fencingly, and repeatedly looked at his watch in protest. Finally I said:

‘Well, Johann, I want to go down this road. I shall not ask you to come unless you like; but tell me why you do not like to go, that is all I ask.’ For answer he seemed to throw himself off the box, so quickly did he reach the ground. Then he stretched out his hands appealingly to me, and implored me not to go. There was just enough of English mixed with the German for me to understand the drift of his talk. He seemed always just about to tell me something–the very idea of which evidently frightened him; but each time he pulled himself up, saying, as he crossed himself: ‘Walpurgis-Nacht!’

I tried to argue with him, but it was difficult to argue with a man when I did not know his language. The advantage certainly rested with him, for although he began to speak in English, of a very crude and broken kind, he always got excited and broke into his native tongue–and every time he did so, he looked at his watch. Then the horses became restless and sniffed the air. At this he grew very pale, and, looking around in a frightened way, he suddenly jumped forward, took them by the bridles and led them on some twenty feet. I followed, and asked why he had done this. For answer he crossed himself, pointed to the spot we had left and drew his carriage in the direction of the other road, indicating a cross, and said, first in German, then in English: ‘Buried him–him what killed themselves.’

I remembered the old custom of burying suicides at cross-roads: ‘Ah! I see, a suicide. How interesting!’ But for the life of me I could not make out why the horses were frightened.

Whilst we were talking, we heard a sort of sound between a yelp and a bark. It was far away; but the horses got very restless, and it took Johann all his time to quiet them. He was pale, and said, ‘It sounds like a wolf–but yet there are no wolves here now.’

‘No?’ I said, questioning him; ‘isn’t it long since the wolves were so near the city?’

‘Long, long,’ he answered, ‘in the spring and summer; but with the snow the wolves have been here not so long.’

Whilst he was petting the horses and trying to quiet them, dark clouds drifted rapidly across the sky. The sunshine passed away, and a breath of cold wind seemed to drift past us. It was only a breath, however, and more in the nature of a warning than a fact, for the sun came out brightly again. Johann looked under his lifted hand at the horizon and said:

‘The storm of snow, he comes before long time.’ Then he looked at his watch again, and, straightway holding his reins firmly–for the horses were still pawing the ground restlessly and shaking their heads–he climbed to his box as though the time had come for proceeding on our journey.

I felt a little obstinate and did not at once get into the carriage.

‘Tell me,’ I said, ‘about this place where the road leads,’ and I pointed down.

Again he crossed himself and mumbled a prayer, before he answered, ‘It is unholy.’