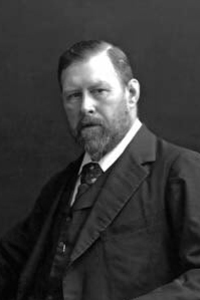 Abraham “Bram” Stoker was an Irish novelist and short story writer. During his lifetime, he was better known as the personal assistant of actor Henry Irving and business manager of the Lyceum Theatre in London, which Irving owned. Stoker supplemented his income by writing novels; the best known being the vampire tale Dracula which was published in 1897. Before writing Dracula, Stoker spent several years researching European folklore and stories of vampires. After Irving’s death he managed productions at the Prince of Wales Theatre and was also on the staff of the Daily Telegraph, but he concentrated mainly on his writings. In 1906 he brought out his life of Irving, which proved very successful.

A true masterwork of storytelling, Dracula has transcended generation, language, and culture to become one of the most popular novels ever written. It i...read more »

“Dracula’s Guest” follows an Englishman as he wanders around Munich before leaving for Transylvania. It is Walpurgis Night, and in spite of the coachman...read more »

“Hither the Gods come not at any summons. The Nameless One has insulted them and is forever alone. Go not nigh, lest their vengeance wither you away!” T...read more »

The tale of Rupert Sent Leger, who has inherited huge amount of money under one condition: to keep it, he must help the people of the Blue Mountain gain...read more »

In a tale of ancient evil, Bram Stoker creates a world of lurking horrors and bizarre denizens: a demented mesmerist, hellbent on mentally crushing the ...read more »

“I would rather be an angel than God!” is the very first sentence in Stoker’s fiction “The Man”. It presents his sentimental ideals at the same time con...read more »

In the years following the success of his novel Dracula, Bram Stoker took on an even more ambitious creative feat: combining mystery, romance, adventure...read more »