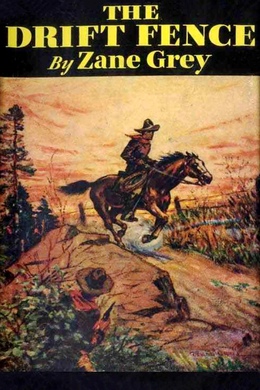 When the first drift fence is built across a free cattle range, anger overflows. Jim Traft, the tenderfoot in charge of building the fence, finds himself in deep trouble. It takes all of his wits to stay alive, let alone complete the fence. But with courage and tenacity Traft finishes his work and lives to see it bring new order to the range.

Molly Dunn sat waiting on the rickety old porch of Enoch Summers’ store in the village of West Fork. For once she was oblivious to the approach of the lean-faced, long-legged young backwoodsmen who lounged there with their elders. Molly was sixteen and on the eve of a great adventure. She had been invited to ride to Flagerstown with the Sees. She had been there once some years before and the memory had haunted her. In her pocket she had money to buy new stockings and shoes, which compensated somewhat for the fact that she carefully kept her feet and ankles hidden under the bench. She wore her good dress and bonnet, and though not satisfied with them she was not ashamed.

Andy Stoneham, a tall youth with sallow face and fuzzy beard, edged over closer and closer.

“Reckon you’re orful stuck up this mawnin’,” he drawled.

Molly looked at the bullet holes in the wall of the old store. She had seen them before, and long ago when she was ten she had stuck her finger in them and wondered about the battle that had been fought there once.

“Do you think I’d dress up like this for West Fork?” inquired Molly, loftily.

“Wal, you used to, didn’t you? You shore look purty. But I can’t see you’ve any call to get uppish. I’ve seen you in thet rig before, haven’t I?”

“Then you’ve got a darn short memory,” replied Andy, bluntly. “Didn’t I take you to the last dance in thet dress?”

“Did you?” queried Molly, flippantly.

“I’ve forgotten. But I’ve heard it said you’re so big an’ awkward you have to hold on to a girl when you dance. Else you’d fall down.”

“Oh, did you!” retorted Molly, her face hot. Andy’s voice carried rather far. “An’ what did I do?”

“Wal, I figger thet you kissed me back an’ then slapped my face.”

“Andy Stoneham, you’re a liar about that first.”

“Andy, I don’t like that place,” returned Molly, regretfully. “Besides, I wouldn’t go with you, anyway.”

“Because of what you said—about huggin’ an’ kissin’ me.”

“They have not,” declared Molly. “Who ever said such a thing?”

“I heerd Sam Wise say it. An’ Bill Smith laughed, though he didn’t say nothin’.”

“So that’s the kind of fellows you are!” exclaimed Molly. “Talk about a girl behind her back? … To kiss an’ tell!”

“Wal, at thet we’re not so gabby as your cowboy admirers from Pleasant Valley. Take thet red-headed cowpuncher. Accordin’ to his talk he’s a tall fellar with gurls. He shore had you crazy aboot him.”

“Wal, you acted orful queer then. Danced all the time with him. An’ three times walked out under the pines. Aw, I watched you. An’ come Saturday night he was drinkin’ heah, an’ accordin’ to his talk he could have had a lot more than huggin’ an’ kissin’ from you, if he only got you alone.”

“Andy Stoneham!—You let him talk that way aboot me?”

“Wal, why should I care? You’ve shore been mean to me.”

“Why should you, indeed?” replied Molly, coldly, and turned away.

At that juncture a horseman rode up and his advent not only interrupted Molly’s argument with her loquacious admirer, but had a decided quieting effect upon the other occupants of the porch. He was a lean range-rider, neither young nor old, and he fitted the hard country. His horse showed the dust and strain of long travel.

“Howdy, Seth,” said old Enoch Summers, rubbing his bristled chin and stepping out. “’Pears like you been humpin’ it along. Whar you come from?”

“Me an’ Arch Dunn just rode over from the Diamond,” replied the other.

Molly’s attention quickened to interest at the mention of her brother. Seth Haverly was his boon companion and they had been up to something.

“Wal, thar’s news stickin’ out all over you,” drawled Summers.

“Git down an’ come in. Mebbe a drink wouldn’t go bad.”

One by one the men on the porch joined Summers. The fact that Seth Haverly did not want a drink, as much as his arrival, interested them.

Haverly had a still brown face and intent light eyes.

“Enoch, you know thet drift fence we been hearin’ aboot for the last year?” he asked.

“Reckon I heerd the talk.”