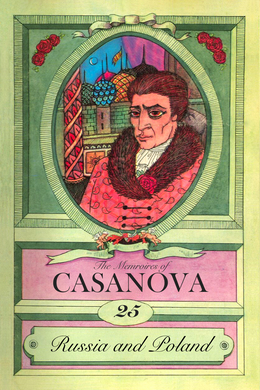 In this episode, Casanova further shares his travel experiences of Russia and Poland. After leaving Riga, Cassanova goes for adventures in St. Petersburg, where he meets the Empress. He vividly portrays the Russian landscape as well as the life-styles of the people. He leaves Russia for Warsaw where he meets with the Princes Adam Czartoryski and Sulkowski, and then the King of Poland. Eventually he heads for a brief tour of eastern Germany before arriving in Vienna. The amalgamation of his personal feelings with the overall experience creates an astounding effect.

My Stay at Riga–Campioni St. Heleine–D’Asagon–Arrival of the Empress- -I Leave Riga and Go to St. Petersburg–I See Society–I Buy Zaira

Prince Charles de Biron, the younger son of the Duke of Courland, Major- General in the Russian service, Knight of the Order of St. Alexander Newski, gave me a distinguished reception after reading his father’s letter. He was thirty-six years of age, pleasant-looking without being handsome, and polite and well-mannered, and he spoke French extremely well. In a few sentences he let me know what he could do for me if I intended to spend some time at Riga. His table, his friends, his pleasures, his horses, his advice, and his purse, all these were at my service, and he offered them with the frankness of the soldier and the geniality of the prince.

“I cannot offer you a lodging,” he said, “because I have hardly enough room for myself, but I will see that you get a comfortable apartment somewhere.”

The apartment was soon found, and I was taken to it by one of the prince’s aides-de-camp. I was scarcely established when the prince came to see me, and made me dine with him just as I was. It was an unceremonious dinner, and I was pleased to meet Campioni, of whom I have spoken several times in these Memoirs. He was a dancer, but very superior to his fellows, and fit for the best company polite, witty, intelligent, and a libertine in a gentlemanly way. He was devoid of prejudices, and fond of women, good cheer, and heavy play, and knew how to keep an even mind both in good and evil fortune. We were mutually pleased to see each other again.

Another guest, a certain Baron de St. Heleine from Savoy, had a pretty but very insignificant wife. The baron, a fat man, was a gamester, a gourmand, and a lover of wine; add that he was a past master in the art of getting into debt and lulling his creditors into a state of false security, and you have all his capacities, for in all other respects he was a fool in the fullest sense of the word. An aide-decamp and the prince’s mistress also dined with us. This mistress, who was pale, thin, and dreamy-looking, but also pretty, might be twenty years old. She hardly ate anything, saying that she was ill and did not like anything on the table. Discontent shewed itself on her every feature. The prince endeavoured, but all in vain, to make her eat and drink, she refused everything disdainfully. The prince laughed good-humouredly at her in such a manner as not to wound her feelings.

We spent two hours pleasantly enough at table, and after coffee had been served, the prince, who had business, shook me by the hand and left me with Campioni, telling me always to regard his table as my last resource.

This old friend and fellow-countryman took me to his house to introduce me to his wife and family. I did not know that he had married a second time. I found the so-called wife to be an Englishwoman, thin, but full of intelligence. She had a daughter of eleven, who might easily have been taken for fifteen; she, too, was marvellously intelligent, and danced, sang, and played on the piano and gave such glances that shewed that nature had been swifter than her years. She made a conquest of me, and her father congratulated me to my delight, but her mother offended her dreadfully by calling her baby.

I went for a walk with Campioni, who gave me a good deal of information, beginning with himself.

“I have lived for ten years,” he said, “with that woman. Betty, whom you admired so much, is not my daughter, the others are my children by my Englishwoman. I have left St. Petersburg for two years, and I live here well enough, and have pupils who do me credit. I play with the prince, sometimes winning and sometimes losing, but I never win enough to enable me to satisfy a wretched creditor I left at St. Petersburg, who persecutes me on account of a bill of exchange. He may put me in prison any day, and I am always expecting him to do so.”

“Is the bill for a large sum?”

“That is only two thousand francs.”

“Yes, but unfortunately I have not got it.”

“You ought to annul the debt by paying small sums on account.”

“Then what do you propose doing?”

“Win a heavy sum, if I can, and escape into Poland.

“The Baron de St. Heleine will run away, too if he can, for he only lives on credit. The prince is very useful to us, as we are able to play at his house; but if we get into difficulty he could not extricate us, as he is heavily in debt himself. He always loses at play. His mistress is expensive, and gives him a great deal of trouble by her ill-humour.”

“She wants him to keep his word, for he promised to get her married at the end of two years; and on the strength of this promise she let him give her two children…”