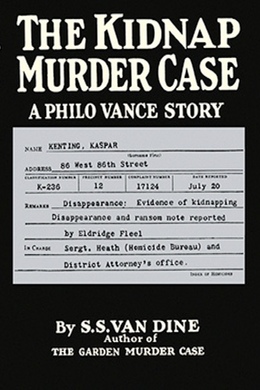 This new Van Dine kidnap-murder case deals with two of the most unusual crimes in the whole record of Philo Vance’s criminological researches. Kasper Kenting, a playboy and ne’er-do-well, disappears from his ancestral home, the ‘Purple House,’ in West 86th Street, with all the indications pointing to a kidnapping. Both District Attorney John F.-X, Markham and Sergeant Ernest Heath of the Homicide Bureau participate, with Philo Vance, in the exciting investigation. In The Kidnap Murder Case Philo Vance runs into the gravest personal danger, and it is through the accuracy of his aim, at the crucial moment, that he saves Sergeant Heath’s life as well as his own. The locale of this amazing crime shifts from one of the most fascinating residential landmarks in mid-town Manhattan to a sordid and obscure hovel on the upper east side. The account moves with arresting swiftness to a dramatic climax and will appeal even to those readers who heretofore have not been especially interested in this type of fiction.

Philo Vance, as you may remember, took a solitary trip to Egypt immediately after the termination of the Garden murder case. He did not return to New York until the middle of July. He was considerably tanned, and there was a tired look in his wide-set grey eyes. I suspected, the moment I greeted him on the dock, that during his absence he had thrown himself into Egyptological research, which was an old passion of his.

“I’m fagged out, Van,” he complained good-naturedly, as we settled ourselves in a taxicab and started uptown to his apartment. “I need a rest. We’re not leavin’ New York this summer—you won’t mind, I hope. I’ve brought back a couple of boxes of archæological specimens. See about them tomorrow, will you?—there’s a good fellow.”

Even his voice sounded weary. His words carried a curious undertone of distraction; and the idea flashed through my mind that he had not altogether succeeded in eliminating from his thoughts the romantic memory of a certain young woman he had met during the strange and fateful occurrences in the penthouse of Professor Ephraim Garden. My surmise must have been correct, for it was that very evening, when he was relaxing in his roof-garden, that Vance remarked to me, apropos of nothing that had gone before: “A man’s affections involve a great responsibility. The things a man wants most must often be sacrificed because of this exacting responsibility.” I felt quite certain then that his sudden and prolonged trip to Egypt had not been an unqualified success as far as his personal objective was concerned.

For the next few days Vance busied himself in arranging, classifying and cataloging the rare pieces he had brought back with him. He threw himself into the work with more than his wonted interest and enthusiasm. His mental and physical condition showed improvement immediately, and it was but a short time before I recognized the old vital Vance that I had always known, keen for sports, for various impersonal activities, and for the constant milling of the undercurrents of human psychology.

It was just a week after his return from Cairo that the famous Kidnap murder case broke. It was an atrocious and clever crime, and more than the usual publicity was given to it in the newspapers because of the wave of kidnapping cases that had been sweeping over the country at that time. But this particular crime of which I am writing from my voluminous notes was very different in many respects from the familiar “snatch”; and it was illumined by many sinister high lights. To be sure, the motive for the crime, or, I should say, crimes, was the sordid one of monetary gain; and superficially the technique was similar to that of the numerous cases in the same category. But through Vance’s determination and fearlessness, through his keen insight into human nature, and his amazing flair for the ramifications of human psychology, he was able to penetrate beyond the seemingly conclusive manifestations of the case.

In the course of this investigation Vance took no thought of any personal risk. At one time he was in the gravest danger, and it was only through his boldness, his lack of physical fear, and his deadly aim and quick action when it was a matter of his life or another’s—partly the result, perhaps, of his World-War experience which won him the Croix de Guerre—that he saved the lives of several innocent persons as well as his own, and eventually put his finger on the criminal in a scene of startling tragedy.

There was a certain righteous indignation in his attitude during this terrible episode—an attitude quite alien to his customarily aloof and cynical and purely academic point of view—for the crime itself was one of the type he particularly abhorred.

As I have said, it was just a week after his return to New York that Vance was unexpectedly, and somewhat against his wishes, drawn into the investigation. He had resumed his habit of working late at night and rising late; but, to my surprise, when I entered the library at nine o’clock on that morning of July 20, he was already up and dressed and had just finished the Turkish coffee and the Régie cigarette that constituted his daily breakfast. He had on his patch-pocket grey tweed suit and a pair of heavy walking boots, which almost invariably indicated a contemplated trip into the country.

Before I could express my astonishment (I believe it was the first time in the course of our relationship that he had risen and started the day before I had) he smilingly explained to me with his antemeridian drawl: