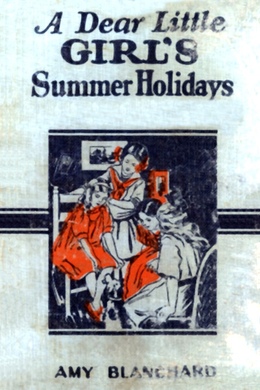 Extract: Mrs. Conway smiled. ‘I think I can venture to say that much or even a little more. I can say that I should like very much to have you go.’ ‘Goody! Goody!’ cried Edna clapping her hands. ‘That is almost as if you said I really could. I had a letter from Jennie, Mother, and she is just crazy for us to come. You know Dorothy is invited, too. Would you like to see Jennie’s letter?’ ‘Very much.’ Edna promptly handed over the blue envelope, and was not disappointed to have her mother say, ‘That is a very nice cordial letter, Edna, and I am sure the invitation shows that both Mrs. Ramsey and Jennie really want you. I will talk it over with your father this evening. Now run along, and don’t exercise too vigorously this warm day, and don’t forget what I said about being in the sun.’ She returned to her letters and Edna with Dorothy left the room. ‘Now we must go to my mother,’ declared Dorothy.

For the next few days there was much talk of clothes and packing, of trains and time-tables, and it was a matter of some discussion as to the best way for the little girls to make their journey of some hundreds of miles. Dorothy had never been so far away from home, and was therefore the more excited of the two. After some writing back and forth it was decided that the two children should go to the city under Mr. Conway’s care and there he turned them over to Mr. Ramsey who was to join his family at the seashore in about a week.

“Do you suppose we shall get homesick?” asked Dorothy as the time drew near for them to make their start.

“Oh, I hope not,” returned Edna fervently. “I was awfully homesick at Aunt Elizabeth’s, but this will be quite different, for there will be Jennie, and Mrs. Ramsey is a real mother; besides we shall have one another.”

“I know all that,” returned Dorothy a little dubiously, “but Jennie’s mother won’t be mine nor yours.”

Edna was willing to admit this, but she had gone through some rather trying experiences and was not disposed to think that anything but pleasant times awaited them. As Jennie had pictured it the visit was to be one long season of delight, so Edna said determinedly. “Well, I don’t intend to be homesick.”

“Then I’ll try not to be,” returned Dorothy, not to be outdone in courage.

However, when the trunks stood ready packed, and Edna said good night for the last time before undertaking the journey, she held her mother very tightly around the neck and whispered: “I wish you were going too, Mother.”

“That can’t be, darling,” said her mother. “You will have such a fine time that you will not miss your mother at all.”

“Oh, but I shall,” returned Edna, half wishing she were not going after all. “I ‘most wish it was time to come back instead of time to go.”

Her mother laughed. “And this is the little girl who could scarcely wait to be told she could go. Never mind, dearie, you will feel quite differently to-morrow morning. Now go to sleep, for you must get up bright and early, you know.”

Edna settled down with a sigh, but, in spite of her excitement, she soon fell asleep to waken in the morning with the feeling that something very important was to happen. Her mother came in to see that she was properly dressed and to tie the bows on her hair. Then just as they were about to sit down to breakfast, the expressman came for the trunk, and next Dorothy arrived all impatience.

“Why, Edna, haven’t you had breakfast yet?” she asked. “Aren’t you afraid we shall be late?”

“We don’t have to go till papa does, and he hasn’t half finished,” replied Edna. So Dorothy had to possess her soul in patience for there was no gainsaying the fact that they could not go without Mr. Conway.

At last the good-byes were said, and Edna waved to her mother till she could no longer see the white figure on the porch. Agnes and Celia had gone on ahead to the station and the boys were there, too, to see them off. Soon the train came in sight; in another moment they had been helped aboard, and the next they were off. It was but a short ride to the city, and this part of the journey was not exciting, as it was one with which they were very familiar. But when they were ushered into Mr. Ramsey’s private office, they felt that here began their untrod way.

They sat for some time, their feet dangling from their high chairs while Mr. Ramsey conferred with his clerks in the outer office. Their talk was carried on in whispers, though once in a while a stifled giggle told that they were in good spirits.

At last Mr. Ramsey appeared. “Well, young ladies,” he said, “I am sorry I had to leave you so long, but when a man is about to take a holiday, he has so many things to see about that he doesn’t know which way to turn.” He looked at his watch. “I think we have just about time enough to get that ten o’clock train.” He pressed an electric button and a boy in a grey uniform came to the door. “Take these bags, Edward,” said Mr. Ramsey, pointing to the satchels each little girl had placed carefully by her chair. The boy led the way to the elevator and down they went to the first floor of the big office building, then to the street where an automobile stood to whizz them off to the station. Mr. Ramsey directed the chauffeur to see about the trunks while he conducted the little girls to the waiting-room where he left them, returning in a moment to hurry them to the train, and the second part of their journey began.

“I never was in a parlor car before,” whispered Dorothy to Edna as the porter turned their seat to a proper angle and adjusted their footstools.

“I was once,” replied Edna.

Here Mr. Ramsey handed over some picture papers to them and a box of chocolates. “I am going into the smoking-car,” he said. “Do you think you young ladies can get along a little while without me?”