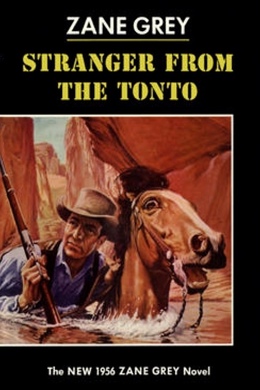 Stranger from the Tonto

Kent Wingfield, a young cowboy, rides into the desert with an old prospector, looking for gold. Then one day the old man realizes this will be his last trip. He reveals that he was once an outlaw in a still flourishing gang. And he asks Kent to settle an old score for him. Kent agrees to go. After all, he is footloose and handy with a gun, and the old man has always been square with him. And besides, in the outlaw’s secret hideout lay both a fortune in stolen gold and a beautiful innocent girl!

One morning from a black slope of a desolate bluff the old prospector located, away to the southward, three red crags. He had grown tremendously excited and nothing could have held him back. These colourful hills seemed far away to the younger man, who ventured a suggestion that it might be wise, considering the time of year, to make for the cool altitudes instead of taking a risk of being caught in that stark and terrific contact with the hot rock.

They went on down into the labyrinth of black craters and red canyons, and across fields of cactus, ablaze with their varied and vivid blossoms. The palo verde shone gold in the sun, the ocotilla scarlet, and the dead palo christi like soft clouds of blue smoke in the glaring sand washes. The luxuriance of the desert growths deceived the eye, but at every end of a maze of verdure there loomed the appalling desolation and decay of the rock fastnesses of the earth.

From time to time the gold seekers caught a glimpse of the three crags that began to partake of the deceitfulness of desert distance. They grew no closer, apparently, but higher, larger, changing as if by magic into mountains. These glimpses spurred Bill Elway on, and Kent Wingfield, knowing they were lost, grew indifferent to the peril and gave himself fully to the adventure.

They had been marvellously fortunate about locating waterholes. Elway had keenness of sight and the judgment of experience. Added to this was the fact that one of his burros, Jenester, could scent water at incredible distances. But one night they had to make dry camp. The next day was hot. It took all of it to find water. And that day the crags disappeared as utterly as if the desert had opened to swallow them.

Cool, sweet desert dawn, with a menacing red in the east, found the adventurers doubly lost, for now they did not even have a landmark to strive for. All points of the compass appeared about the same–barren mountains, dark cones, stark and naked shining ridges, pale blue ranges in the distance.

But Elway pushed on south, more bowed every day, and lame. The burros became troublesome to drive. Jenester wanted to turn back, and the others were dominated by her instinct. Elway, however, was ruthless. Kent watched him, no longer with blind faith, but with the perturbation of one who saw a man guided by some sixth sense, into which intelligence did not enter.

Nevertheless soon he changed their order of travel, in that they slept in the daytime and went on at night. The early dawn, soft and grey and exquisite, the glorious burst of sunrise, seemed to hold the younger man enthralled, as did the gorgeous sunsets, and the marvellous creeping twilight. As for the other hours, he slept in the shade of an ironwood tree, bathed in sweat and tortured by nightmares, or he stalked silently after the implacable prospector.

They talked but little. Once Elway asked how many days were left in June and Kent replied that he guessed about half.

“August is the hot month. We can still get out,” said the prospector, rolling a pebble in his mouth. And by that he probably meant they could find gold and still escape from the fiery furnace of the desert. But he had ceased to pan sand in the washes or pick at the rocks.

The days multiplied. Spent in the shade they were not unendurable or utterly strength-prostrating. But the noon hours, during which the men invariably awoke, had a solemn menacing austerity. The nights were pleasant, so far as atmosphere was concerned. Try as Elway might, he could not drive the burros in a straight line. Jenester edged away to the east, which fact was not manifest until daylight.

Another dry camp, with the last of the water in their canteens used up, brought the wanderers to extremity. Elway had pitted his judgment against the instinct of Jenester, and catastrophe faced them.

Darkness brought relief from the sun, if not from overwhelming dread. The moon came up from behind black hills and the desert became a silvered chaos, silent as death, unreal and enchanting in its beauty.

This night Elway gave Jenester her head and with ears up she led to the east. The others followed eagerly. They went so fast that the men had to exert themselves to keep up. At midnight Kent was lending a hand to the older man. The sand dragged at their leaden feet. But they could not head the burros, which they were now following by the tinkling of Jenester’s bell. The moon sank behind the dark horizon. White, blinking, pitiless stars shone piercingly. They paled into grey and when dawn broke the young man was half-supporting the old prospector.