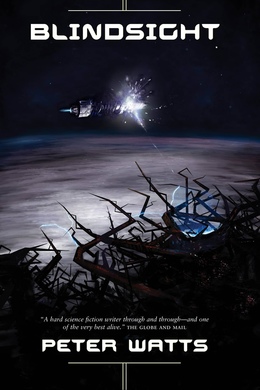 It’s been two months since a myriad of alien objects clenched about the Earth, screaming as they burned. The heavens have been silent since - until a derelict space probe hears whispers from a distant comet. Something talks out there: but not to us. Who to send to meet the alien, when the alien doesn’t want to meet? Send a linguist with multiple-personality disorder, and a biologist so spliced to machinery he can’t feel his own flesh. Send a pacifist warrior, and a vampire recalled from the grave by the voodoo of paleogenetics. Send a man with half his mind gone since childhood. Send them to the edge of the solar system, praying you can trust such freaks and monsters with the fate of a world. You fear they may be more alien than the thing they’ve been sent to find - but you’d give anything for that to be true, if you knew what was waiting for them.

Imagine you are Siri Keeton:

You wake in an agony of resurrection, gasping after a record-shattering bout of sleep apnea spanning one hundred forty days. You can feel your blood, syrupy with dobutamine and leuenkephalin, forcing its way through arteries shriveled by months on standby. The body inflates in painful increments: blood vessels dilate; flesh peels apart from flesh; ribs crack in your ears with sudden unaccustomed flexion. Your joints have seized up through disuse. You’re a stick-man, frozen in some perverse rigor vitae.

You’d scream if you had the breath.

Vampires did this all the time, you remember. It was normal for them, it was their own unique take on resource conservation. They could have taught your kind a few things about restraint, if that absurd aversion to right-angles hadn’t done them in at the dawn of civilization. Maybe they still can. They’re back now, after all— raised from the grave with the voodoo of paleogenetics, stitched together from junk genes and fossil marrow steeped in the blood of sociopaths and high-functioning autistics. One of them commands this very mission. A handful of his genes live on in your own body so it too can rise from the dead, here at the edge of interstellar space. Nobody gets past Jupiter without becoming part vampire.

The pain begins, just slightly, to recede. You fire up your inlays and access your own vitals: it’ll be long minutes before your body responds fully to motor commands, hours before it stops hurting. The pain’s an unavoidable side effect. That’s just what happens when you splice vampire subroutines into Human code. You asked about painkillers once, but nerve blocks of any kind compromise metabolic reactivation. Suck it up, soldier.

You wonder if this was how it felt for Chelsea, before the end. But that evokes a whole other kind of pain, so you block it out and concentrate on the life pushing its way back into your extremities. Suffering in silence, you check the logs for fresh telemetry.

You think: That can’t be right.

Because if it is, you’re in the wrong part of the universe. You’re not in the Kuiper Belt where you belong: you’re high above the ecliptic and deep into the Oort, the realm of long-period comets that only grace the sun every million years or so. You’ve gone interstellar, which means (you bring up the system clock) you’ve been undead for eighteen hundred days.

The lid of your coffin slides away. Your own cadaverous body reflects from the mirrored bulkhead opposite, a desiccated lungfish waiting for the rains. Bladders of isotonic saline cling to its limbs like engorged antiparasites, like the opposite of leeches. You remember the needles going in just before you shut down, way back when your veins were more than dry twisted filaments of beef jerky.

Szpindel’s reflection stares back from his own pod to your immediate right. His face is as bloodless and skeletal as yours. His wide sunken eyes jiggle in their sockets as he reacquires his own links, sensory interfaces so massive that your own off-the-shelf inlays amount to shadow-puppetry in comparison.

You hear coughing and the rustling of limbs just past line-of-sight, catch glimpses of reflected motion where the others stir at the edge of vision.

“Wha—” Your voice is barely more than a hoarse whisper. “…happ…?”

You haven’t even met the aliens yet, and already they’re running rings around you.