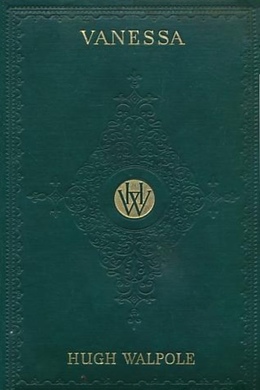 The fourth and final volume of the Herries Chronicles is a love story of ‘effortless brilliance’ which starts with the triumph of Judith Paris’s hundredth birthday in the 1870’s and then moves to the tragic disillusionment of the late 19th and early 20th centuries. Set, predominantly, as before, amidst the grandeur of the English lake district landscape, it tells the passionate and unforgettable story of Vanessa, Judith’s Granddaughter and her n’er-do-well cousin Benjie whom she had sworn in childhood never to betray.

At the sight of her son Judith’s eyes and mouth broke into the loveliest smile that any member of the Herries family, there present, had ever seen. It was Judith Paris’ hundredth birthday. The Family was making a Presentation.

Adam bent down and kissed her. Her tiny, trembling hand rested on the velvet collar of his coat then lay against his cheek. Her triumph was complete; her exceeding happiness overflowed so that, laughing though she was, tears rolled down her cheeks.

Afterwards, at the luncheon downstairs, Adam was to make the speech, but when the time came, the one that he made was very feeble. Everyone (except of course Adam’s wife, Margaret, and Adam’s young daughter, Vanessa) agreed that he was no speaker; the speech of the occasion came, oddly enough, from Amery Herries, of whom no one had expected very much. There were more speeches at the dinner later in the day–Timothy, Barney Newmark, Carey Rockage, Captain Will Herries, all spoke–but it was Amery who was afterwards recalled.

‘Damned good speech, d’you remember?’ years later one Herries would say to another. ‘At old Madame’s Hundredth Birthday party up in Cumberland … Best speech ever I heard in my life.’

Adam was a failure. He never could say anything in public, even long ago in his Chartist days. More than that, he was thinking of his mother, the old lady upstairs, all the time. And more than that again, he couldn’t sound the right Herries note. He was only QUARTER Herries anyway, and he simply wasn’t able to think of them in the grand historical light that all the family, expectant round the luncheon table, desired.

But Amery could. He thought of them all (including himself) in precisely the grand manner.

All Adam said was:

‘I am sure we are all very happy to be here today for my mother’s hundredth birthday. You’ll forgive me, I know, if I don’t say very much. Not very good at expressing my feelings. Yes–well–I know what you’re all feeling. We’re all very proud of my mother and we all ought to be. She’s like the Queen–nothing can beat her. I don’t need to tell you how good she is. Of course I know that better than the rest of you–naturally I would. There’s no one like her anywhere. I ask you all to drink her health.’

And so they did–with the greatest enthusiasm. Nevertheless there was a feeling of disappointment, for he had said nothing about the Family–not a word. It was expected of him. After all, even though he WAS illegitimate, his father had been of Herries blood. They knew, they had always known, that Adam Paris failed at anything that he tried. What could you expect of a fellow who had once been a Chartist and approved of these Trades Unions, was always on the wrong side, against Disraeli, in favour of tiresome agitators like Mr Plimsoll? (They disliked any and every agitator. They disapproved of agitation.)

But Amery made everything right again with HIS speech. He didn’t look his sixty-five years, so spare of figure and straight in the back; he had not run to seed like poor Garth, who led, it was feared, a most improvident and dissolute life. Amery’s speech was short but entirely to the point:

‘Only a word. I won’t take more than a minute. But I do want to say that my friend Adam is quite right–this IS a great occasion for all of us! There is not, I venture to say, another family in England with so remarkable a lady at the head of it as Madame whom we are gathered together to honour. It is not only that she has reached her hundredth year–although that is an achievement in itself–but that she has reached it with such vigour, such health, such courage! It is interesting to remember that nearly a hundred and fifty years ago her father, as a young man, rode pack-horse into this district, a stranger and almost you might say homeless. There were, I suppose, members of our family scattered about England at that time, but no one, I fear, had ever heard of any of them. Now, sitting round this table today we have one of England’s most famous novelists–spare your blushes, Barney Newmark–the widow of one of England’s most prominent financiers–I bow to you, Lady Herries–whose son is following worthily in his father’s footsteps–I drink to the City, Ellis–the son of one of England’s leading Divines, the gallant Captain here–one of the most active members, I’m told, of the House of Peers–never been there myself, but that’s what they tell me, Carey, my son–and one of the loveliest women in the whole of England, Mrs Robert Forster–I bow towards you, Veronica!