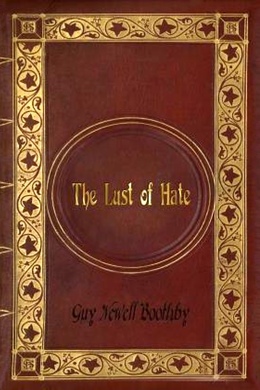 The Lust of Hate

In this the third of Boothby’s Dr. Nikola novels, Nikola applies his almost hypnotic persuasion to convince an out-of-luck Australian, formerly from England, named Gilbert Pennethorne to assist Nikola unwittingly in an evil scheme. Nikola takes advantage of Pennethorne’s intense desire for revenge against a former boss in Australia who stole information about the location of a gold field that would have made Pennethorne immensely wealthy. Using that information the boss made himself rich, living a high life in London, while Pennethorne remained penniless. Nikola contrives a plan and a device for Pennethorne to commit the perfect murder of the wealthy thief. Unknowingly, Pennethorne thus becomes a party to another one of Nikola’s insidious schemes.

When I reached England, the icy hand of winter was upon the land. The streets were banked feet high with snow, and the Thames at London Bridge was nothing but a mass of floating ice upon which an active man could have passed from shore to shore. Poor homeless wretches were to be seen sheltering themselves in every nook and cranny, and the morning papers teemed with gruesome descriptions of dead bodies found in drifts, of damage done to property, and of trains delayed and snowed up in every conceivable part of the country. Such a winter had not been experienced for years, and when I arrived and realised what it meant for myself, I could not but comment on my madness in having left an Australian summer to participate in such a direful state of things.

Immediately on arrival I made my way to Blankerton’s Hotel, off the Strand, and installed myself there. It was a nice, quiet place, and suited me admirably. The voyage home from Australia had done me a world of good–that is to say as far as my bodily health was concerned–but it was doubtful whether it had relieved my brain of any of the pressure recent events in Australia had placed upon it. Though nearly three months had elapsed since my terrible disappointment in the Boolga Ranges, I had not been able to reconcile myself to it; and as the monotonous existence on board ship allowed me more leisure, it probably induced me to brood upon it more than I should otherwise have done. At any rate, my first thought on reaching London was that I was in the same city with my enemy, and my second to wonder how I could best get even with him. All day and all night this idea held possession of my brain. I could think of nothing but my hatred of the man, and as often as I saw his name mentioned in the columns of the Press, the more vehement my desire to punish him became. Looking back on it now it seems to me that I could not have been quite right in my head at that time, though to all intents and purposes I was as rational a being as ever stepped in shoe leather. In proof of what I mean, I can remember, times out of number, talking sensibly and calmly enough in the smoking room, and then going upstairs to my bedroom and leaning out of my window, from which a glimpse of the Strand was obtainable, to watch the constant stream of passers by and to wonder if Bartrand were among the number. I would imagine myself meeting him and enticing him into one of those dark passages leading from the gas-lit thoroughfare, and then, when I had revealed my identity, drawing a knife from my sleeve and stabbing him to his treacherous heart. On another occasion I spent hours concocting a most ingenious plan for luring him on to the Embankment late at night, and arranging that my steps to my hotel, feeling about as miserable as it would be possible for a man to be. What did life contain for me now? I asked myself this question for the hundredth time, as I walked up the sombre street; and the answer was, Nothing–absolutely nothing. By judiciously investing the amount I had inherited under my father’s will I had secured to myself an income approaching two hundred pounds a year, but beyond that I had not a penny in the world. I had been sick to death of Australia for some years before I had thought of leaving it, and my last great disappointment had not furnished me with any desire to return to it. On the other hand I had seen too much of the world to be able to settle down to an office life in England, and my enfeebled constitution, even had I desired to do so, would have effectively debarred me from enlisting in the Army. What, therefore, was to become of me–for I could not entertain the prospect of settling down to a sort of vegetable existence on my small income–I could not see. “Oh, if only I had not been taken ill after Ben’s death,” I said to myself again and again; “what might I not then have done?” As it was, that scoundrel Bartrand had made millions out of what was really my property, and as a result I was a genteel pauper without a hope of any sort in the world. As the recollection of my disappointment came into my mind, I ground my teeth and cursed him; and for the rest of my walk occupied myself thinking of the different ways in which I might compass his destruction, and at the same time hating myself for lacking the necessary pluck to put any one of them into execution.

As I reached the entrance to my hotel a paper boy came round the corner crying his wares.

‘“Ere yer are, sir; ‘orrible murder in the West End,” he said, running to meet me; and, wanting something to occupy me until breakfast should be ready, I bought a copy and went in and seated myself by the hall fire to read it. On the second page was a column with the following headline, in large type:–

“Shocking Tragedy In The West End.” Feeling in the humour for this sort of literature, I began to read. The details were as follows:–