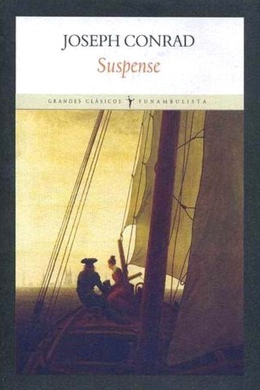 Conrad’s unfinished novel that he was working on before his death in 1924, in which he returns to one of his favorite subjects: the French Revolution. Unlike Duel, his character here is a young Englishman named Cosmo Latham, who visits Genoa during the days in which Napoleon was imprisoned on Elba, where a conspiratorial environment of diplomats and spies of all colors pivot around the spectral figure of the exiled emperor. Among the many people that Cosmo meets, there he meets Madame de Montevesso, a liberal aristocrat who has had the misfortune to marry an unscrupulous soldier. Conrad shows the mastery of his craft and the precision and richness of his writing-he considered this novel one of his greatest achievements- Suspense is a work that could have been a masterpiece had it not been for his sudden death.

A deep red glow flushed the fronts of marble palaces piled up on the slope of an arid mountain, whose barren ridge traced high on the darkening sky a ghostly and glimmering outline. The winter sun was setting over the Gulf of Genoa. Behind the massive shore the sky to the east was like darkening glass. The open water, too, had a glassy look with a purple sheen in which the evening light lingered as if clinging to the water. The sails of a few becalmed feluccas looked rosy and cheerful, motionless in the gathering gloom. Their heads were all pointing towards the superb city. Within the long jetty with the squat round tower at the end, the water of the harbour had turned black. A bigger vessel with square sails, issuing from it and arrested by the sudden descent of the calm, faced the red disc of the sun. Her ensign hung down and its colours were not to be made out; but a lank man in a shabby sailor’s jacket, and wearing a strange cap with a tassel, who lounged with both his arms thrown over the black breech of an enormous piece of ordnance that with three of its monstrous fellows squatted on the platform of the tower, seemed to have no doubt of her nationality; for to the question of a young civilian in a long coat and Hessian boots and with an ingenuous young countenance above the folds of a white neckcloth, he answered curtly, taking a short pipe out of his mouth, but not turning his head:

He replaced his pipe and preserved an unsociable air. The elegant young man with the pleasant countenance, who was Cosmo, the son of Sir Charles Latham, of Latham Hall, Yorkshire, repeated under his breath, “Elban,” and remained wrapped up in still contemplation of the becalmed ship with her undistinguishable flag.

It was not till the sun had sunk beneath the waters of the Mediterranean, and the undistinguishable flag had been hauled down on board the motionless ship, that he stirred and turned his eyes towards the harbour. The nearest prominent object in it was the imposing shape of an English line-of-battle ship moored on the west side not far from the quay. Her tall spars overtopped the roofs of the houses, and the English ensign at her flagstaff had been just hauled down and replaced by a lantern that looked strange in the clear twilight. The forms of shipping crowded towards the head of the harbour were merging into one another. Cosmo let his eyes wander over the circular platform of the tower. The man leaning over the gun went on smoking with indifference.

“Are you the guardian of this tower?” asked the young man.

The other gave him a sidelong glance, and made answer without changing his attitude, and more as if speaking to himself:

“This is now an unguarded spot. The wars are over.”

“Do they close the door at the bottom of this tower at night?” inquired Cosmo.

“That is a matter worth consideration, especially for those like you, for instance, who have a soft bed to go to for the night.”

The young man put his head on one side and looked at his interlocutor with a faint smile.

“You don’t seem to care,” he said. “So I conclude I need not. As long as you are content to stay here I am safe enough. I followed you up the stairs, you know.”

The man with the pipe stood up abruptly. “You followed me here? Why did you do that, in the name of all the saints?”

The young man laughed as if at a good joke. “Because you were walking in front of me. There was nobody else in view near the Mole. Suddenly you disappeared. Then I saw that the door at the bottom of the tower was open, and I walked up the stairs on to this platform. And I would have been very surprised if I hadn’t found you here.”

The man in the strange cap ornamented with a tassel had taken his pipe out of his mouth to listen. “That was all?”

“Nobody but an Englishman would behave like that,” commented the other to himself, a slight appearance of apprehension passing over his features. “You are an eccentric people.”

“I don’t see anything eccentric in what I’ve done. I simply wanted to walk out of the town. The Mole was as good as any other part. It is very pleasant here.”

A slight breeze touched the two men’s faces, while they stood silent, looking at each other. “I am but an idle traveller,” said Cosmo easily. “I arrived this morning by land. I am glad I had the idea to come out here to behold your town glowing in the sunset, and to get a sight of a vessel belonging to Elba. There can’t be very many of them. But you, my friend … ”

“I have as much right to idle away my time here as any English traveller,” interrupted the man hastily.

“It is very pleasant here,” repeated the young traveller, staring into the dusk which had invaded the platform of the tower.