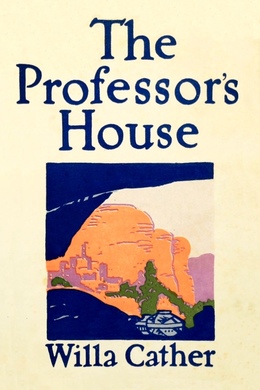 On the eve of his move to a new, more desirable residence, Professor Godfrey St. Peter finds himself in the shabby study of his former home. Surrounded by the comforting, familiar sights of his past, he surveys his life and the people he has loved — his wife Lillian, his daughters, and Tom Outland, his most outstanding student and once, his son-in-law to be. Enigmatic and courageous—and a tragic victim of the Great War — Tom has remained a source of inspiration to the professor. But he has also left behind him a troubling legacy which has brought betrayal and fracture to the women he loves most.

The moving was over and done. Professor St. Peter was alone in the dismantled house where he had lived ever since his marriage, where he had worked out his career and brought up his two daughters. It was almost as ugly as it is possible for a house to be; square, three stories in height, painted the colour of ashes–the front porch just too narrow for comfort, with a slanting floor and sagging steps. As he walked slowly about the empty, echoing rooms on that bright September morning, the Professor regarded thoughtfully the needless inconveniences he had put up with for so long; the stairs that were too steep, the halls that were too cramped, the awkward oak mantles with thick round posts crowned by bumptious wooden balls, over green-tiled fire-places.

Certain wobbly stair treads, certain creaky boards in the upstairs hall, had made him wince many times a day for twenty-odd years–and they still creaked and wobbled. He had a deft hand with tools, he could easily have fixed them, but there were always so many things to fix, and there was not time enough to go round. He went into the kitchen, where he had carpentered under a succession of cooks, went up to the bath-room on the second floor, where there was only a painted tin tub; the taps were so old that no plumber could ever screw them tight enough to stop the drip, the window could only be coaxed up and down by wriggling, and the doors of the linen closet didn’t fit. He had sympathized with his daughters’ dissatisfaction, though he could never quite agree with them that the bath should be the most attractive room in the house. He had spent the happiest years of his youth in a house at Versailles where it distinctly was not, and he had known many charming people who had no bath at all. However, as his wife said: “If your country has contributed one thing, at least, to civilization, why not have it?” Many a night, after blowing out his study lamp, he had leaped into that tub, clad in his pyjamas, to give it another coat of some one of the many paints that were advertised to behave like porcelain, and didn’t.

The Professor in pyjamas was not an unpleasant sight; for looks, the fewer clothes he had on, the better. Anything that clung to his body showed it to be built upon extremely good bones, with the slender hips and springy shoulders of a tireless swimmer. Though he was born on Lake Michigan, of mixed stock (Canadian French on one side, and American farmers on the other), St. Peter was commonly said to look like a Spaniard. That was possibly because he had been in Spain a good deal, and was an authority on certain phases of Spanish history. He had a long brown face, with an oval chin over which he wore a close trimmed Van-Dyke, like a tuft of shiny black fur. With this silky, very black hair, he had a tawny skin with gold lights in it, a hawk nose, and hawk-like eyes–brown and gold and green. They were set in ample cavities, with plenty of room to move about, under thick, curly, black eyebrows that turned up sharply at the outer ends, like military moustaches. His wicked-looking eyebrows made his students call him Mephistopheles– and there was no evading the searching eyes underneath them; eyes that in a flash could pick out a friend or an unusual stranger from a throng. They had lost none of their fire, though just now the man behind them was feeling a diminution of ardour.

His daughter Kathleen, who had done several successful studies of him in water-colour, had once said:–“The thing that really makes Papa handsome is the modelling of his head between the top of his ear and his crown; it is quite the best thing about him.” That part of his head was high, polished, hard as bronze, and the close- growing black hair threw off a streak of light along the rounded ridge where the skull was fullest. The mould of his head on the side was so individual and definite, so far from casual, that it was more like a statue’s head than a man’s.

From one of the dismantled windows the Professor happened to look out into his back garden, and at that cheerful sight he went quickly downstairs and escaped from the dusty air and brutal light of the empty rooms.