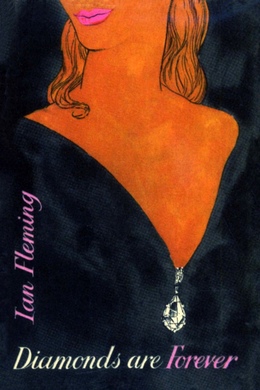 The Spangled Mob are no ordinary American gangsters. They prey on the addictions of the wealthy and treat the poor as collateral. Their ruthless desire for power and fierce brotherly loyalty make them deadly and invincible. James Bond must go deep undercover in his urgent new assignment: to destroy their millionaire masterminds, Jack and Seraffimo Spang. But the Spangs’ cruel influence is everywhere, from dusty African diamond mines to the frenzied gambling dens of Las Vegas. Can Bond find his men before his cover is blown?

With its two fighting claws held forward like a wrestler’s arms the big pandinus scorpion emerged with a dry rustle from the finger-sized hole under the rock.

There was a small patch of hard, flat earth outside the hole and the scorpion stood in the centre of this on the tips of its four pairs of legs, its nerves and muscles braced for a quick retreat and its senses questing for the minute vibrations which would decide its next move.

The moonlight, glittering down through the great thorn bush, threw sapphire highlights off the hard, black polish of the six-inch body and glinted palely on the moist white sting which protruded from the last segment of the tail, now curved over parallel with the scorpion’s flat back.

Slowly the sting slid home into its sheath and the nerves in the poison sac at its base relaxed. The scorpion had decided. Greed had won over fear.

Twelve inches away, at the bottom of a sharp slope of sand, the small beetle was concerned only with trudging on towards better pastures than he had found under the thorn bush, and the swift rush of the scorpion down the slope gave him no time to open his wings. The beetle’s legs waved in protest as the sharp claw snapped round his body, and then the sting lanced into him from over the scorpion’s head and immediately he was dead.

After it had killed the beetle the scorpion stood motionless for nearly five minutes. During this time, it identified the nature of its prey and again tested the ground and the air for hostile vibrations. Reassured, its fighting claw withdrew from the half-severed beetle and its two small feeding pincers reached out and into the beetle’s flesh. Then for an hour, and with extreme fastidiousness, the scorpion ate its victim.

The great thorn bush under which the scorpion killed the beetle was quite a landmark in the wide expanse of rolling veld some forty miles south of Kissidougou in the south-western corner of French Guinea. On all horizons there were hills and jungle, but here, over twenty square miles, there was flat rocky ground which was almost desert and amongst the tropical scrub only this one thorn bush, perhaps because there was water deep beneath its roots, had grown to the height of a house and could be picked out from many miles away.

The bush grew more or less at the junction of three African states. It was in French Guinea but only about ten miles north of the northernmost tip of Liberia and five miles east of the frontier of Sierra Leone. Across this frontier are the great diamond mines around Sefadu. These are the property of Sierra International, which is part of the powerful mining empire of Afric International, which in turn is a rich capital asset of the British Commonwealth.

An hour earlier in its hole among the roots of the great thorn bush the scorpion had been alerted by two sets of vibrations. First there had been the tiny scraping of the beetle’s movements, and these belonged to the vibrations which the scorpion immediately recognized and diagnosed. Then there had been a series of incomprehensible thuds round the bush followed by a final heavy quake which had caved in part of the scorpion’s hole. These were followed by a soft rhythmic trembling of the ground which was so regular that it soon became a background vibration of no urgency. After a pause the tiny scraping of the beetle had continued, and it was greed for the beetle that, after a day of sheltering from its deadliest enemy, the sun, finally got the upper hand against the scorpion’s memory of the other noises and impelled it out of its lair into the filtering moonlight.

And now, as it slowly sucked the morsels of beetle-flesh off its feeding pincers, the signal for the scorpion’s own death sounded from far away on the eastern horizon, audible to a human, but made up of vibrations which were far outside the range of the scorpion’s sensory system.

And, a few feet away, a heavy, blunt hand, with bitten finger nails, softly raised a jagged piece of rock.

There was no noise, but the scorpion felt a tiny movement in the air above it. At once its fighting claws were up and groping and its sting was erect in the rigid tail, its near-sighted eyes staring up for a sight of the enemy.

The heavy stone came down.

The man watched as the broken insect whipped in its death agony.

The man yawned. He got to his knees in the sandy depression against the trunk of the bush where he had been sitting for nearly two hours and, his arms bent protectingly over his head, scrambled out into the open.

The noise of the engine which the man had been waiting for, and which had signed the scorpion’s death warrant, was louder. As the man stood and stared up the path of the moon, he could just see a clumsy black shape coming fast towards him out of the east and for a moment the moonlight glinted on whirling rotor blades.