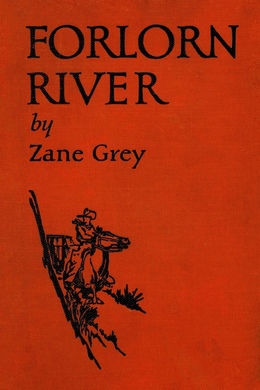 Ben Ide is a failure in the horse trade because he loves horses more than money. A few bad deals have turned the world against him. His greatest adversary is his father, who thinks Ben good for nothing. Determined to show what he is made of and what he can do, Ben pursues a herd of wild horses. The herd leads him directly into danger: cattle thieves with connections in high places. Distrusted by the woman he loves, menaced by killers, and hounded by slander, Ben finds his day of reckoning at the edge of Forlorn River. What he does next will make him an outcast or a hero. Forlorn River sets in motion the events and characters that extend into Nevada.

Ben Ide named this lonely wandering stream Forlorn River because it was like his life.

Ben was well-born and had attended school until sixteen years of age, but from the time he had given up to his passion for the open country and the chase of wild horses he had gotten nowhere. That seemed the way of Forlorn River. It had its beginning in Clear Lake, a large body of surface water lying amid the Sage Mountains of northwestern California. It had begun well enough at its source under the beautiful rounded bare mountains of gray sage, and flowed bravely on for a few miles, then suddenly it became a lost river. That was what it was called by the Indians.

It meandered around under the foothills with their black fringe of juniper, into the wide gray valleys where thousands of wild horses roamed; to and fro across the open country as if seeking escape, on toward the dark pine-timbered ranges of Nevada; and back again, a barren little stream without creeks or springs to freshen it, a wilderness waterway, dear to the Indian and horse-hunter and cowboy; slackened by the thirsty Clay Flats to the west, and crowded away on the north by the huge red bluff that blocked entrance into Wild Goose Basin, forced at last to describe a wandering hundred-mile circle and find on the other side of the sage-hills, not far from its source, a miserable sand-choked outlet into the vast level ranch and pasture-land which had once been the bottom of Tule Lake.

Ben’s gray weather-beaten cabin partook somewhat of the melancholy austerity of the country, yet it was most picturesquely located on the south shore of the big lake, on the only elevated and wooded cape that jutted out into the wind-ruffed waters. Forlorn River was born just under his door, for his cabin did not face the lake, but the river and the west. Ben could watch the aimless windings of the stream for many a mile. Scattered juniper trees saved this slight eminence of land from the baldness of the irregular shore line. Clear Lake was ten miles round, and everywhere but at this point the gray sage reached down to the white high-water line. Back from the cabin where the cape widened stood a large well-built barn, which adjoined an enormous corral. Spirited horses kicked up the dust, and whistled, perhaps to their wild kindred in plain sight on the distant gray slopes, swelling toward the blue sky. Barn and corral, presenting such marked contrast to the little gray cabin, might have told an observant eye that Ben Ide loved horses and thought little of himself.

Spring had come late, the dryest of six successive dry springs. Clear Lake was lower than ever before in the memory of the Modoc Indians, who had lived there always. The white baked earth spread a long distance down from the sage line to the water. Flocks of ducks dotted the yellow surface of the lake. Wild geese tarried here on the way north, and every hour of day or night Ben heard their resonant and melodious honk, honk, honk. It was high country. Frost glistened on the roof of the barn and ice glinted along the shores of Forlorn River. Snow peaks notched the blue sky above the black-timbered range of Nevada mountains. The air was cold and crisp, fragrant with the scent of sage.

Ben Ide came out on the porch to gaze across the river and the long gray slope that led up to a pass between two of the Sage Mountains. His keen eye followed the winding thread that was a trail disappearing over the notch.

“No use to worry. But they ought to have got back last night,” he muttered, as he again scanned the trail.

Then from force of habit he looked on up the vast heave and bulge of the mountain, so softly and beautifully gray and purple in the morning sunlight. Here he did not meet with disappointment. Nine wild horses were in sight, two pure white that shone wonderfully in the clear air, and the rest all black. They lived on that mountain-top. They had been there all the four years Ben had lived at Forlorn River. During the first year of his sojourn there he had often chased them, as much for sport as for profit. But the advantage had always been theirs, and as they could not be driven from the great dome of this mountain, he let them alone, and came at last to watch for them in pleasure and love. When there was snow on the slopes they never left the mountain, and in summer, when they ventured down to the lake to drink, it was always at night. They never raised a colt and never took a strange horse into their band.

Just the mere sight of them had power to thrill Ben Ide. He hailed them gayly, as if they were as near as his own whistling horses in the corral. He gloried in their beauty, freedom, and self-sufficiency. He understood them. They were like eagles. They could look far away and down, and see their kindred, and their enemy, man. Years had taught them wisdom.