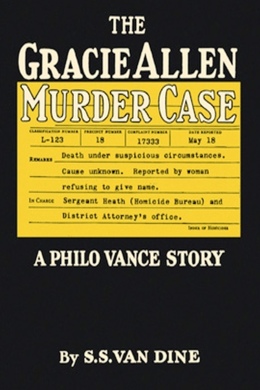 The zany plot follows nitwit Gracie Allen trying to help master sleuth Philo Vance solve a murder. Allen’s uncle fixes her up with Bill at a company picnic. When the two go out to a nightclub that night, Gracie inadvertently links Bill to the murder of a thug after finding the dead body and Bill’s cigarette case at the scene of the crime. While being questioned at the club, she meets Vance who’s investigating the homicide. After Gracie’s bungled attempts to solve the case, Vance decides it might be easier to have her working with him. Despite Gracie’s ‘help,’ the two eventually find the real killer.

Philo Vance, curiously enough, always liked the Gracie Allen murder case more than any of the others in which he participated.

The case was, perhaps, not as serious as some of the others—although, on second thought, I am not so sure that this is strictly true. Indeed, it was fraught with many ominous potentialities; and its basic elements (as I look back now) were, in fact, intensely dramatic and sinister, despite its almost constant leaven of humor.

I have often asked Vance why he felt so keen a fondness for this case, and he has always airily retorted with a brief explanation that it constituted his one patent failure as an investigator of the many crimes presented to him by District Attorney John F.-X. Markham.

“No—oh, no, Van; it was not my case at all, don’t y’ know,” Vance drawled, as we sat before his grate fire one wintry evening, long after the events. “Really, y’ know, I deserve none of the credit. I would have been utterly baffled and helpless had it not been for the charming Gracie Allen who always popped up at just the crucial moment to save me from disaster…. If ever you should embalm the case in print, please place the credit where it rightfully belongs…. My word, what an astonishing girl! The goddesses of Zeus’ Olympian ménage never harassed old Priam and Agamemnon with the éclat exhibited by Gracie Allen in harassing the recidivists of that highly scented affair. Amazin’! … ”

It was an almost unbelievable case from many angles, exceedingly unorthodox and unpredictable. The mystery and enchantment of perfume permeated the entire picture. The magic of fortune-telling and commercial haruspicy in general were intimately involved in its deciphering. And there was a human romantic element which lent it an unusual roseate color.

To start with, it was spring—the 17th day of May—and the weather was unusually mild. Vance and Markham and I had dined on the spacious veranda of the Bellwood Country Club, overlooking the Hudson. The three of us had chatted in desultory fashion, for this was to be an hour of sheer relaxation and pleasure, without any intrusion of the jarring criminal interludes which had, in recent years, marked so many of our talks.

However, even at this moment of serenity, ugly criminal angles were beginning to protrude, though unsuspected by any of us; and their shadow was creeping silently toward us.

We had finished our coffee and were sipping our chartreuse when Sergeant Heath, looking grim and bewildered, appeared at the door leading from the main dining-room to the veranda, and strode quickly to our table.

“Hello, Mr. Vance.” His tone was hurried. “…Howdy, Chief. Sorry to bother you, but this came into the office half an hour after you left and, knowing where you were, I thought it best to bring it to you pronto.” He drew a folded yellow paper from his pocket and, opening it out, placed it emphatically before the District Attorney.

Markham read it carefully, shrugged his shoulders, and handed the paper back to Heath.

“I can’t see,” he said without emotion, “why this routine information should necessitate a trip up here.”

“Why, that’s the guy, Chief, that threatened to get you.”

“I’m quite aware of that fact,” said Markham coldly; then he added in a somewhat softened tone: “Sit down, Sergeant. Consider yourself off duty for the moment, and have a drink of your favorite whisky.”

When Heath had adjusted himself in a chair, Markham went on.

“Surely you don’t expect me, at this late date, to begin taking seriously the hysterical mouthings of criminals I have convicted in the course of my duties.”

“But, Chief, this guy’s a tough hombre, and he ain’t the forgetting or the forgiving kind.”

“Anyway,”—Markham laughed without concern—“it would be tomorrow, at the earliest, before he could reach New York.”

As Heath and Markham were speaking, Vance’s eyebrows rose in mild curiosity.

“I say, Markham, all I’ve been able to glean is that your tutel’ry Sergeant has fears for your curtailed existence, and that you yourself are rather annoyed by his zealous worries.”

“Yes, yes, I know,” smiled Vance. “Always careful. Sewin’ up seams that haven’t even ripped. Doughty and admirable, as always, Sergeant. But whence springeth your qualm?”

“I’m sorry, Vance.” Markham apologized for his failure to explain. “It’s really of no importance—just a routine telegraphic announcement of a rather commonplace jail-break at Nomenica. Three men under long sentences staged the exodus, and two of them were shot by the guards….”

“I’m not botherin’ about the guys who was shot,” Heath cut in. “It’s the other one—the guy that got away safe—that’s set me to thinkin’——”