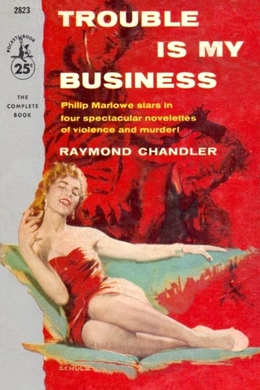 Trouble is My Business

Trouble is My Business is a collection of four riveting novellas from Raymond Chandler. In the first of the four cases LA PI Philip Marlowe is offered a job that leaves a bad taste in the mouth: smearing a girl who’s ‘got her hooks into a rich man’s pup’. Before too long Marlowe’s up to his neck in corpses and cops and he’s taken pity on the girl. There’s nothing like making trouble of your business . . . The four novellas collected here are quintessential Raymond Chandler: slick, crystal-clear writing that pins the reader to the seat and won’t let go until the last page is turned.

Anna Halsey was about two hundred and forty pounds of middle-aged putty-faced woman in a black tailor-made suit. Her eyes were shiny black shoe buttons, her cheeks were as soft as suet and about the same color. She was sitting behind a black glass desk that looked like Napoleon’s tomb and she was smoking a cigarette in a black holder that was not quite as long as a rolled umbrella. She said: “I need a man.”

I watched her shake ash from the cigarette to the shiny top of the desk where flakes of it curled and crawled in the draft from an open window.

“I need a man good-looking enough to pick up a dame who has a sense of class, but he’s got to be tough enough to swap punches with a power shovel. I need a guy who can act like a bar lizard and backchat like Fred Allen, only better, and get hit on the head with a beer truck and think some cutie in the leg-line topped him with a breadstick.”

“It’s a cinch,” I said. “You need the New York Yankees, Robert Donat, and the Yacht Club Boys.”

“You might do,” Anna said, “cleaned up a little. Twenty bucks a day and ex’s. I haven’t brokered a job in years, but this one is out of my line. I’m in the smooth-angles of the detecting business and I make money without getting my can knocked off. Let’s see how Gladys likes you.”

She reversed the cigarette holder and tipped a key on a large black-and-chromium annunciator box. “Come in and empty Anna’s ash tray, honey.”

The door opened and a tall blonde dressed better than the Duchess of Windsor strolled in.

She swayed elegantly across the room, emptied Anna’s ash tray, patted her fat cheek, gave me a smooth rippling glance and went out again.

“I think she blushed,” Anna said when the door closed. “I guess you still have It.”

“She blushed—and I have a dinner date with Darryl Zanuck,” I said. “Quit horsing around. What’s the story?”

“It’s to smear a girl. A redheaded number with bedroom eyes. She’s shill for a gambler and she’s got her hooks into a rich man’s pup.”

Anna sighed. “It’s kind of a mean job, Philip, I guess. If she’s got a record of any sort, you dig it up and toss it in her face. If she hasn’t, which is more likely as she comes from good people, it’s kind of up to you. You get an idea once in a while, don’t you?”

“I can’t remember the last one I had. What gambler and what rich man?”

I started to get up from my chair, then remembered that business had been bad for a month and that I needed the money.

I sat down again.

“You might get into trouble, of course,” Anna said. “I never heard of Marty bumping anybody off in the public square at high noon, but he don’t play with cigar coupons.”

“Trouble is my business,” I said. “Twenty-five a day and guarantee of two-fifty, if I pull the job.”

“I gotta make a little something for myself,” Anna whined.

“O.K. There’s plenty of coolie labor around town. Nice to have seen you looking so well. So long, Anna.”

I stood up this time. My life wasn’t worth much, but it was worth that much. Marty Estel was supposed to be pretty tough people, with the right helpers and the right protection behind him. His place was out in West Hollywood, on the Strip. He wouldn’t pull anything crude, but if he pulled at all, something would pop.

“Sit down, it’s a deal,” Anna sneered. “I’m a poor old broken-down woman trying to run a high-class detective agency on nothing but fat and bad health, so take my last nickel and laugh at me.”

“Her name is Harriet Huntress—a swell name for the part too. She lives in the El Milano, nineteen-hundred block on North Sycamore, very high-class. Father went broke back in thirty-one and jumped out of his office window. Mother dead. Kid sister in boarding school back in Connecticut. That might make an angle.”

“The client got a bunch of photostats of notes the pup had given to Marty. Fifty grand worth. The pup—he’s an adopted son to the old man—denied the notes, as kids will. So the client had the photostats experted by a guy named Arbogast, who pretends to be good at that sort of thing. He said O.K. and dug around a bit, but he’s too fat to do legwork, like me, and he’s off the case now.”

“I don’t know why not.” Anna nodded several of her chins.

“This client—does he have a name?”

“Son, you have a treat coming. You can meet him in person—right now.”

She tipped the key of her call box again. “Have Mr. Jeeter come in, honey.”

“You lay off Gladys!” Anna almost screamed at me. “She’s worth eighteen grand a year in divorce business to me. Any guy that lays a finger on her, Philip Marlowe, is practically cremated.”