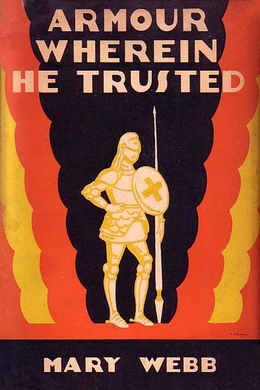 A Novel and Some Stories

Webb’s unfinished novel, published posthumously, together with ten short stories, this is a medieval romance. It is the story of Sir Gilbert and his love for Nesta. Whilst delighting in love’s pleasures, he strives to renounce earthly passion, seeking instead spiritual perfection.

In the forest are many voices, and no man riding under the leaves hears the same voice as his companion. For they are diverse as the steep winding paths up into Heaven-Town, to which no man can come by any other way than that his own torch shows him, though the good burgesses leaning over the battlements, picking their teeth, should shout a plain direction to him.

For though one says, ‘Come thou through the brake fern, there to the left,’ and another says ‘No, yonder by the great yew-tree!’ and a third crieth that he must go through the deep heather, yet he knows that his one only way is by the Christ-thorn gleaming above the chasm.

So in the forest a man must hear with his own ears the carol that is for him, and one will hear a very sad song, with pine-trees in it, rasping needle on needle and cone on cone, and another will hear flutes and dulcimers afar, as you hear on the white roads of holy Italy. Nor will a man well stricken in years hear the same music as a lad.

So I, riding alone in the oak woods, wending towards Powis (which as all men know is in the Marches of Wales, a savage country in part, but quieter in Sciropshire and ruled and misruled by the Lords Marchers), a young knight in my hey-day, being then one score and three years, lusty, care-free and love-free, heard in the springing April forest on every side the voices of faeries, lively and mocking and beguiling. Not near, nor very far, but where the trees drew together, even where the mist began, they were, hovering in a cloud like midges on a summer day.

Though my eyes were keen enough, I might peer and peer, but see nought of them, not so much as a wing-tip or a gleam of flaxen hair. But in the great stillness of the day I could hear them, mourning like doves, laughing like woodpeckers, shivering into a scatter of sweet notes like painted glass in fragments, belling like frogs in the marishes.

The scurrels ran in the sparse-leaved tree-tops, red as raddle, mazed with spring. I laughed out, and the noise of it startled a herd of wild ponies feeding in the silent forest, so that they took fright, and drove across our way, and my good stallion, heady with grass, gave a grunt and was after them. So it chanced I came to Powis by a roundabout way, through a vasty grove of oaks that were hung and garlanded as for a festival with yellowing mistletoe. All was so still—still as a dewpond. The great oaken boughs were a little leafy with young red leaves, and they spread and towered in the quiet, minding them of the centuries, aye, minding them of the hour that was so still, a thousand years gone and more, when the midnight grew sudden-sweet and small flowers were where had been none, and bells spoke in the meady, golden air, and the thin echo of voices came upon the land—

The oaks called it to mind. Though storms ravened, they seemed ever at their orisons, and never did I come there but a stillness fell upon me. My good horse stopped, snuffing the air, staring, sweating, then hung his head, hearing, as I know well, beneath the sea-voices of the high boughs—

I left him standing there and went softly on, over the stag-moss. All was so holy, I was glad I was dressed in my best green coat and my hat with a grey goose feather, for it was as if I went to the Easter Supper.

After a while, I saw that in the midst of the oak grove was a thicket of Christ-thorn, bravely budded. So I went into the thicket, thinking I might find an altar there. But there was no altar, only a small bower woven of wattles and decked out with bunches of early flowers—marigolds and the flowers of young hyacinthus, and the day’s eye. Small, nimble birds made claw-marks in the soft earth about it, and the merles sang as if none but faeries ever came there.

‘It is a witchen-house,’ I said. ‘I shall be put in a spell.’ And even as I spoke, one looked from the small window of the bower, and behold! it was my love. I knew it was my love, though I had never seen her afore, and I was bewildered, standing like an oaf, looking upon her under the leaves. I mused on her long, struck, as the heron is when he sees his mate imaged in the water. She seemed not troubled at all, to have a great fellow standing there, and by this I was sure she was a faery, since they know not fear.