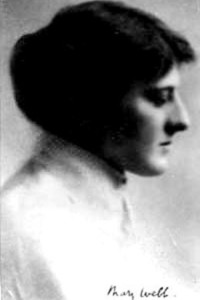 Mary Webb was an English romantic novelist and poet of the early 20th century, whose work is set chiefly in the Shropshire countryside and among Shropshire characters and people which she knew. Her novels have been successfully dramatized, most notably the film Gone to Earth in 1950 by Michael Powell and Emeric Pressburger. They inspired the famous parody Cold Comfort Farm. (source: Wikipedia)

Webb’s unfinished novel, published posthumously, together with ten short stories, this is a medieval romance. It is the story of Sir Gilbert and his lov...read more »

The daughter of a Welsh gypsy and a crazy bee-keeper, Hazel Woodus is happiest living in her forest cottage in the remote Shropshire hills, at one with ...read more »

Narrated by the central character Prue Sarn, whose life is blighted by having a harelip. Only the weaver, Kester Woodseaves, perceives her inner beauty ...read more »

In the depths of Dormer Forest, nestling in a valley, lies Dormer Old House, inhabited by the Drake family, Solomon and Rachael with their four grown ch...read more »