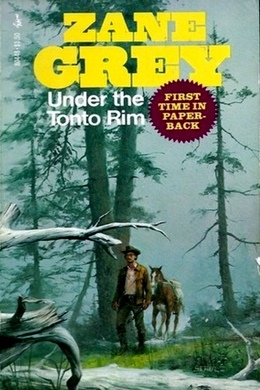 Under the Tonto Rim

Lucy Watson, a young schoolteacher, is appointed welfare instructor in a community of isolated backwoods folk. She quickly overcomes their fears, and achieves popularity by the practical results of her work. She is especially successful with a strong, uncouth bee-hunter. Zane Grey’s handling of these primitive characters is robust and understanding.

Lucy Watson did not leave home without regrets. For a long time she gazed at the desert scenery through tear-blurred eyes. But this sadness seemed rather for the past–the home that had been, before the death of her mother and the elopement of her younger sister with a cowboy. This escapade of Clara’s had been the last straw. Lucy had clung to the home in the hope she might save her sister from following in the footsteps of others of the family. Always she had felt keenly the stigma of being the daughter of a saloon-keeper. In her school days she had suffered under this opprobrium, and had conceived an ideal to help her rise above the circumstances of her position. Clara’s defection had left her free. And now she was speeding away from the town where she had been born, with an ache in her heart, and yet a slowly dawning consciousness of relief, of hope, of thrill. By the time she reached Oglethorpe, where she was to take a branch-line train, she was able to address all her faculties to a realization of her adventures.

Lucy had graduated from high school and normal school with honors. Of the several opportunities open to her she had chosen one of welfare work among backwoods people. It was not exactly missionary work, as her employers belonged to a department of the state government. Her duty was to go among the poor families of the wilderness and help them to make better homes. The significance of these words had prompted Lucy to make her choice. Better homes! It had been her ideal to help make her own home better, and so long as her mother lived she had succeeded. The salary offered was small, but that did not cause her concern. The fact that she had the welfare department of the state behind her, and could use to reasonable extent funds for the betterment of these primitive people, was something of far greater importance. When she had accepted this position two remarks had been made to her, both of which had been thought-provoking. Mr. Sands, the head of the department, had said: “We would not trust every young woman with this work. It is a sort of state experiment. But we believe in the right hands it will be a great benefit to these uncultivated people of the backwoods. Tact, cleverness, and kindliness of heart will be factors in your success.”

Lucy had derived gratification from this indirect compliment. The other remark had aroused only amusement. Mrs. Larabee, also connected with the welfare work, had remarked: “You are a good-looking young woman, Miss Watson. You will cause something of a stir among the young men at Cedar Ridge. I was there last summer. Such strapping young giants I never saw! I liked them, wild and uncouth as they were. I wouldn’t be surprised if one of them married you.”

Oglethorpe was a little way station in the desert. The branch-line train, consisting of two cars and the engine, stood waiting on a side track. Mexicans in huge sombreros and Indians with colored blankets stolidly watched Lucy carry her heavy bags from one train to the other. A young brakeman espied her and helped her aboard, not forgetting some bold and admiring glances. The coach was only partly filled with passengers, and those whom Lucy noticed bore the stamp of the range.

Soon the train started over an uneven and uphill roadbed. Lucy began to find pleasure in gazing out of the window. The flat bare desert had given place to hills, fresh with spring greens. The air had lost the tang of the cattle range. Occasionally Lucy espied a black tableland rising in the distance, and this she guessed was timbered mountain country, whither she was bound.

At noon the train arrived at its terminal stop, San Dimas, a hamlet of flat-roofed houses. Lucy was interested only in the stagecoach that left here for her destination, Cedar Ridge. The young brakeman again came to her assistance and carried her baggage. “Goin’ up in the woods, hey?” he queried, curiously.

“Yes, I think they did say woods, backwoods,” laughed Lucy. “I go to Cedar Ridge, and farther still.”

“All alone–a pretty girl!” he exclaimed, gallantly. “For two cents I’d throw up my job an’ go with you.”

“Thank you. Do you think I need a–a protector?” replied Lucy.

“Among those bee hunters an’ white-mule drinkers! I reckon you do, miss.”

“I imagine they will not be any more dangerous than cowboys on the range–or brakemen on trains,” replied Lucy, with a smile. “Anyway, I can take care of myself.”