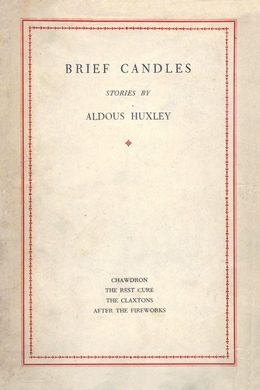 This collection of Huxley short stories contains After the Fireworks which is the length of a short novel and deals with the predicament of a well-known writer who finds himself approached as an oldish man, by an importunate female admirer who aspires at all costs to be his mistress. A further three stories are included, which are, Chawdron, The Rest Cure and The Claxtons. This is a must read for all Huxley fans.

From behind the outspread Times I broke a silence. ‘Your friend Chawdron’s dead, I see.’

‘“Suddenly, of heart failure,”’ I went on, reading from the obituary, ‘“at his residence in St James’s Square.”’

‘Fifty-nine. I didn’t realize the ruffian had been rich for so long. “…the extraordinary business instinct, coupled with a truly Scottish doggedness and determination, which raised him, before he was thirty-five, from obscurity and comparative poverty to the height of opulence.” Don’t you wish you could write like that? My father lost a quarter of a century’s savings in one of his companies.’

‘Served him right for saving!’ said Tilney with a sudden savagery. Surprised, I looked at him over the top of my paper. On his gnarled and ruddy face was an expression of angry gloom. The news had evidently depressed him. Besides, he was always ill-tempered at breakfast. My poor father was paying. ‘What sort of jam is that by you?’ he asked fiercely.

‘Then I’ll have some marmalade.’

I passed him the marmalade and, ignoring his bad temper, ‘When the Old Man,’ I continued, ‘and along with him, of course, most of the other shareholders, had sold out at about eighty per cent dead loss, Chawdron did a little quiet conjuring and the price whizzed up again. But by that time he was the owner of practically all the stock.’

‘I’m always on the side of the ruffians,’ said Tilney. ‘On principle.’

‘Oh, so am I. All the same, I do regret those twelve thousand pounds.’

Tilney said nothing. I returned to the obituary.

‘What do they say about the New Guinea Oil Company scandal?’ he asked after a silence.

‘Very little; and the touch is beautifully light. “The findings of the Royal Commission were on the whole favourable, though it was generally considered at the time that Mr Chawdron had acted somewhat inconsiderately.”’

Tilney laughed. ‘“Inconsiderately” is good. I wish I made fourteen hundred thousand pounds each time I was inconsiderate.’

‘Was that what he made out of the New Guinea Oil business?’

‘So he told me, and I don’t think he exaggerated. He never lied for pleasure. Out of business hours he was remarkably honest.’

‘You must have known him very well.’

‘Intimately,’ said Tilney, and, pushing away his plate, he began to fill his pipe.

‘I envy you. What a specimen for one’s collection! But didn’t you get rather bored with living inside the museum, so to speak, behind the menagerie bars? Being intimate with a specimen—it must be trying.’

‘Not if the specimen’s immensely rich,’ Tilney answered. ‘You see, I’m partial to Napoleon brandy and Corona Coronas; parasitism has its rewards. And if you’re skilful, it needn’t have too many penalties. It’s possible to be a high-souled louse, an independent tapeworm. But Napoleon brandy and Coronas weren’t the only attractions Chawdron possessed for me. I have a disinterested, scientific curiosity about the enormously wealthy. A man with an income of more than fifty thousand a year is such a fantastic and improbable being. Chawdron was specially interesting because he’d made all his money—mainly dishonestly; that was the fascinating thing. He was a large-scale, Napoleonic crook. And, by God, he looked it! Did you know him by sight?’

I shook my head.

‘Like an illustration to Lombroso. A criminal type. But intelligently criminal, not brutally. He wasn’t brutal.’

‘I thought he was supposed to look like a chimpanzee,’ I put in.

‘He did,’ said Tilney. ‘But, after all, a chimpanzee isn’t brutal-looking. What you’re struck by in a chimpanzee is its all-but-human appearance. So very intelligent, so nearly a man. Chawdron’s face had just that look. But with a difference. The chimpanzee looks gentle and virtuous and quite without humour. Whereas Chawdron’s intelligent all-but-humanity was sly and, underneath the twinkling jocularity, quite ruthless. Oh, a strange, interesting creature! I got a lot of fun out of my study of him. But in the end, of course, he did bore me. Bored me to death. He was so drearily uneducated. Didn’t know the most obvious things, couldn’t understand a generalization. And then quite disgustingly without taste, without aesthetic sense or understanding. Metaphysically and artistically a cretin.’

‘The obituarist doesn’t seem to be of your opinion.’ I turned again to The Times. ‘Where is it now? Ah! “A remarkable writer was lost when Chawdron took up finance. Not entirely lost, however; for the brilliant Autobiography, published in 1921, remains as a lasting memorial to his talents as a stylist and narrator.” What do you say to that?’ I asked, looking up at Tilney.