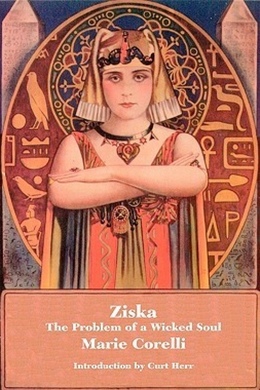 The Problem of a Wicked Soul

Armand Gervase has it all. He is a famous artist, his paintings are hung in national galleries, and he is celebrated worldwide. His best-known painting, depicting an alluring Egyptian woman about to murder her lover, is known for its minute, historic detail, yet Armand has no experience with Egypt’s ancient past…or does he? Rejecting the idea of heaven and hell, soul and spirit, Armand embraces a life of decadence which allows him the freedom to act as he pleases - until he meets the seductive and hypnotic Princess Ziska. Haunted by strange and distant memories of her, Armand attempts to unravel her mystery, only to discover his memories of her are centuries old - and she looks terrifying similar to the female in his celebrated painting. How can this be? Has he fallen in love with a ghost, or is there something more sinister lurking behind Ziska’s hypnotic eyes? A supernatural tale of reincarnation, seduction, and revenge, Ziska was a bestseller when it was first published.

It was the full “season” in Cairo. The ubiquitous Britisher and the no less ubiquitous American had planted their differing “society” standards on the sandy soil watered by the Nile, and were busily engaged in the work of reducing the city, formerly called Al Kahira or The Victorious, to a more deplorable condition of subjection and slavery than any old-world conqueror could ever have done. For the heavy yoke of modern fashion has been flung on the neck of Al Kahira, and the irresistible, tyrannic dominion of “swagger” vulgarity has laid The Victorious low. The swarthy children of the desert might, and possibly would, be ready and willing to go forth and fight men with men’s weapons for the freedom to live and die unmolested in their own native land; but against the blandly-smiling, white-helmeted, sun-spectacled, perspiring horde of Cook’s “cheap trippers,” what can they do save remain inert and well-nigh speechless? For nothing like the cheap tripper was ever seen in the world till our present enlightened and glorious day of progress; he is a new-grafted type of nomad, like and yet unlike a man. The Darwin theory asserts itself proudly and prominently in bristles of truth all over him–in his restlessness, his ape-like agility and curiosity, his shameless inquisitiveness, his careful cleansing of himself from foreign fleas, his general attention to minutiae, and his always voracious appetite; and where the ape ends and the man begins is somewhat difficult to discover. The “image of God” wherewith he, together with his fellows, was originally supposed to be impressed in the first fresh days of Creation, seems fairly blotted out, for there is no touch of the Divine in his mortal composition. Nor does the second created phase-the copy of the Divineo–namely, the Heroic,–dignify his form or ennoble his countenance. There is nothing of the heroic in the wandering biped who swings through the streets of Cairo in white flannels, laughing at the staid composure of the Arabs, flicking thumb and finger at the patient noses of the small hireable donkeys and other beasts of burden, thrusting a warm red face of inquiry into the shadowy recesses of odoriferous bazaars, and sauntering at evening in the Esbekiyeh Gardens, cigar in mouth and hands in pockets, looking on the scene and behaving in it as if the whole place were but a reflex of Earl’s Court Exhibition. History affects the cheap tripper not at all; he regards the Pyramids as “good building” merely, and the inscrutable Sphinx itself as a fine target for empty soda-water bottles, while perhaps his chiefest regret is that the granite whereof the ancient monster is hewn is too hard for him to inscribe his distinguished name thereon. It is true that there is a punishment inflicted on any person or persons attempting such wanton work–a fine or the bastinado; yet neither fine nor bastinado would affect the “tripper” if he could only succeed in carving “‘Arry” on the Sphinx’s jaw. But he cannot, and herein is his own misery. Otherwise he comports himself in Egypt as he does at Margate, with no more thought, reflection, or reverence than dignify the composition of his far-off Simian ancestor.

Taking him all in all, he is, however, no worse, and in some respects better, than the “swagger” folk who “do” Egypt, or rather, consent in a languid way to be “done” by Egypt. These are the people who annually leave England on the plea of being unable to stand the cheery, frosty, and in every respect healthy winter of their native country–that winter, which with its wild winds, its sparkling frost and snow, its holly trees bright with scarlet berries, its merry hunters galloping over field and moor during daylight hours, and its great log fires roaring up the chimneys at evening, was sufficiently good for their forefathers to thrive upon and live through contentedly up to a hale and hearty old age in the times when the fever of travelling from place to place was an unknown disease, and home was indeed “sweet home.” Infected by strange maladies of the blood and nerves, to which even scientific physicians find it hard to give suitable names, they shudder at the first whiff of cold, and filling huge trunks with a thousand foolish things which have, through luxurious habit, become necessities to their pallid existences, they hastily depart to the Land of the Sun, carrying with them their nameless languors, discontents and incurable illnesses, for which Heaven itself, much less Egypt, could provide no remedy. It is not at all to be wondered at that these physically and morally sick tribes of human kind have ceased to give any serious attention as to what may possibly become of them after death, or whether there IS any “after,” for they are in the mentally comatose condition which precedes entire wreckage of brain-force; existence itself has become a “bore;” one place is like another, and they repeat the same monotonous round of living in every spot where the