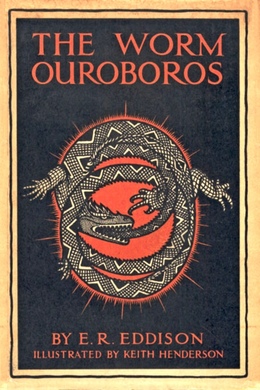 This is the book that shaped the landscape of contemporary science fiction and fantasy. When The Lord of the Rings first appeared, the critics inevitably compared it to this landmark work. Tolkien himself frankly acknowledged its influence, with warm praise for its imaginative appeal. The story of a remote planet’s great war between two kingdoms, it ranks as the Iliad of heroic fantasy. In the best traditions of Homeric epics, Norse sagas, and Arthurian myths, author E. R. Eddison weaves a compelling adventure, with a majestic, Shakespearean narrative style. His sweeping tale recounts battles between warriors and witches on fog-shrouded mountaintops and in the ocean’s depths—along with romantic interludes, backroom intrigues, and episodes of direst treachery.

The eastern stars were paling to the dawn as Lessingham followed his conductor along the grass walk between the shadowy ranks of Irish yews, that stood like soldiers mysterious and expectant in the darkness. The grass was bathed in night-dew, and great white lilies sleeping in the shadows of the yews loaded the air of that garden with fragrance. Lessingham felt no touch of the ground beneath his feet, and when he stretched out his hand to touch a tree his hand passed through branch and leaves as though they were unsubstantial as a moonbeam.

The little martlet, alighting on his shoulder, laughed in his ear. “Child of earth,” she said, “dost think we are here in dreamland?”

He answered nothing, and she said, “This is no dream. Thou, first of the children of men, art come to Mercury, where thou and I will journey up and down for a season to show thee the lands and oceans, the forests, plains, and ancient mountains, cities and palaces of this world, Mercury, and the doings of them that dwell therein. But here thou canst not handle aught, neither make the folk ware of thee, not though thou shout thy throat hoarse. For thou and I walk here impalpable and invisible, as it were two dreams walking.”

They were now on the marble steps which led from the yew walk to the terrace opposite the great gate of the castle. “No need to unbar gates to thee and me,” said the martlet, as they passed beneath the darkness of that ancient portal, carved with strange devices, and clean through the massy timbers of the bolted gate thickly riveted with silver, into the inner court. “Go we into the lofty presence chamber and there tarry awhile. Morning is kindling the upper air, and folk will soon be stirring in the castle, for they lie not long abed when day begins in Demonland. For be it known to thee, O earthborn, that this land is Demonland, and this castle the castle of Lord Juss, and this day now dawning his birthday, when the Demons hold high festival in Juss’s castle to do honour unto him and to his brethren, Spitfire and Goldry Bluszco; and these and their fathers before them bear rule from time immemorial in Demonland, and have the lordship over all the Demons.”

She spoke, and the first low beams of the sun smote javelin-like through the eastern windows, and the freshness of morning breathed and shimmered in that lofty chamber, chasing the blue and dusky shades of departed night to the corners and recesses, and to the rafters of the vaulted roof. Surely no potentate of earth, not Croesus, not the great King, not Minos in his royal palace in Crete, not all the Pharaohs, not Queen Semiramis, nor all the Kings of Babylon and Nineveh had ever a throne room to compare in glory with that high presence chamber of the lords of Demonland. Its walls and pillars were of snow-white marble, every vein whereof was set with small gems: rubies, corals, garnets, and pink topaz. Seven pillars on either side bore up the shadowy vault of the roof; the roof-tree and the beams were of gold, curiously carved, the roof itself of mother-of-pearl. A side aisle ran behind each row of pillars, and seven paintings on the western side faced seven spacious windows on the east. At the end of the hall upon a dais stood three high seats, the arms of each composed of two hippogriffs wrought in gold, with wings spread, and the legs of the seats the legs of the hippogriffs; but the body of each high seat was a single jewel of monstrous size: the left-hand seat a black opal, asparkle with steel-blue fire, the next a fire-opal, as it were a burning coal, the third seat an alexandrite, purple like wine by night but deep sea-green by day. Ten more pillars stood in semicircle behind the high seats, bearing up above them and the dais a canopy of gold. The benches that ran from end to end of the lofty chamber were of cedar, inlaid with coral and ivory, and so were the tables that stood before the benches. The floor of the chamber was tessellated, of marble and green tourmaline, and on every square of tourmaline was carven the image of a fish: as the dolphin, the conger, the cat-fish, the salmon, the tunny, the squid, and other wonders of the deep. Hangings of tapestry were behind the high seats, worked with flowers, snake’s-head, snapdragon, dragon-mouth, and their kind; and on the dado below the windows were sculptures of birds and beasts and creeping things.