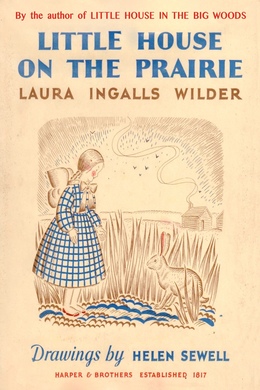 Little House on the Prairie

Laura Ingalls and her family are heading to Kansas! Leaving behind their home in the Big Woods of Wisconsin, they travel by covered wagon until they find the perfect spot to build a little house on the prairie. Laura and her sister Mary love exploring the rolling hills around their new home, but the family must soon get to work, farming and hunting and gathering food for themselves and for their livestock. Just when the Ingalls family starts to settle into their new home, they find themselves caught in the middle of a conflict. Will they have to move again?

Pet and Patty began to trot briskly, as if they were glad, too. Laura held tight to the wagon bow and stood up in the jolting wagon. Beyond Pa’s shoulder and far across the waves of green grass she could see the trees, and they were not like any trees she had seen before. They were no taller than bushes.

“Whoa!” said Pa, suddenly. “Now which way?” he muttered to himself.

The road divided here, and you could not tell which was the more-traveled way. Both of them were faint wheel tracks in the grass. One went toward the west, the other sloped downward a little, toward the south. Both soon vanished in the tall, blowing grass.

“Better go downhill, I guess,” Pa decided. “The creek’s down in the bottoms. Must be this is the way to the ford.” He turned Pet and Patty toward the south.

The road went down and up and down and up again, over gently curving land. The trees were nearer now, but they were no taller. Then Laura gasped and clutched the wagon bow, for almost under Pet’s and Patty’s noses there was no more blowing grass, there was no land at all. She looked beyond the edge of the land and across the tops of trees.

The road turned there. For a little way it went along the cliff’s top, then it went sharply downward. Pa put on the brakes; Pet and Patty braced themselves backward and almost sat down. The wagon wheels slid onward, little by little lowering the wagon farther down the steep slope into the ground. Jagged cliffs of bare red earth rose up on both sides of the wagon. Grass waved along their tops, but nothing grew on their seamed, straight-up-and-down sides. They were hot, and heat came from them against Laura’s face. The wind was still blowing overhead, but it did not blow down into this deep crack in the ground. The stillness seemed strange and empty.

Then once more the wagon was level. The narrow crack down which it had come opened into the bottom lands. Here grew the tall trees whose tops Laura had seen from the prairie above. Shady groves were scattered on the rolling meadows, and in the groves deer were lying down, hardly to be seen among the shadows. The deer turned their heads toward the wagon, and curious fawns stood up to see it more clearly.

Laura was surprised because she did not see the creek. But the bottom lands were wide. Down here, below the prairie, there were gentle hills and open sunny places. The air was still and hot. Under the wagon wheels the ground was soft. In the sunny open spaces the grass grew thin, and deer had cropped it short.

For a while the high, bare cliffs of red earth stood up behind the wagon. But they were almost hidden behind hills and trees when Pet and Patty stopped to drink from the creek.

The rushing sound of the water filled the still air. All along the creek banks the trees hung over it and made it dark with shadows. In the middle it ran swiftly, sparkling silver and blue. “This creek’s pretty high,” Pa said. “But I guess we can make it all right. You can see this is a ford, by the old wheel ruts. What do you say, Caroline?”

“Whatever you say, Charles, Ma answered.

Pet and Patty lifted their wet noses. They pricked their ears forward, looking at the creek; then they pricked them backward to hear what Pa would say. They sighed and laid their soft noses together to whisper to each other. A little way upstream, Jack was lapping the water with his red tongue.

“I’ll tie down the wagon-cover,” Pa said. He climbed down from the seat, unrolled the canvas sides and tied them firmly to the wagon box. Then he pulled the rope at the back, so that the canvas puckered together in the middle, leaving only a tiny round hole, too small to see through.

Mary huddled down on the bed. She did not like fords; she was afraid of the rushing water. But Laura was excited; she liked the splashing. Pa climbed to the seat, saying, “They may have to swim, out there in the middle. But we’ll make it all right, Caroline.”

Laura thought of Jack and said, “I wish Jack could ride in the wagon, Pa.”

Pa did not answer. He gathered the reins tightly in his hands. Ma said, “Jack can swim, Laura. He will be all right.” The wagon went forward softly in mud. Water began to splash against the wheels. The splashing grew louder. The wagon shook as the noisy water struck at it. Then all at once the wagon lifted and balanced and swayed. It was a lovely feeling.

The noise stopped, and Ma said, sharply, “Lie down, girls!”

Quick as a flash, Mary and Laura dropped flat on the bed. When Ma spoke like that, they did as they were told. Ma’s arm pulled a smothering blanket over them, heads and all.

Mary did not move; she was trembling and still. But Laura could not help wriggling a little bit. She did so want to see what was happening. She could feel the wagon swaying and turning; the splashing was noisy again, and again it died away. Then Pa’s voice frightened Laura. It said, “Take them, Caroline!”