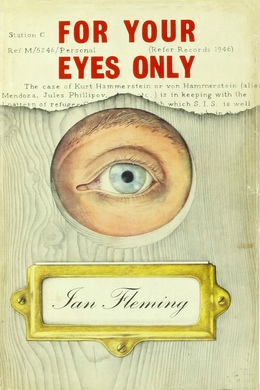 For Your Eyes Only

Five Secret Occasions in the Life of James Bond

Sudden emergencies and beautiful girls who aren’t quite what they seem and are the stock-in-trade of James Bond. And when 007 is on the case there’s only one thing you can be sure of—the result will be thrilling. And whether he’s dealing with the assassination of a Cuban thug in America, the destruction of an international heroin ring, or sudden death in the Seychelles, Bond gets the job done. In his own suave and unmistakable style.

The eyes behind the wide black rubber goggles were cold as flint. In the howling speed-turmoil of a B.S.A. M.20 doing seventy, they were the only quiet things in the hurtling flesh and metal. Protected by the glass of the goggles, they stared fixedly ahead from just above the centre of the handle-bars, and their dark unwavering focus was that of gun-muzzles. Below the goggles, the wind had got into the face through the mouth and had wrenched the lips back into a square grin that showed big tombstone teeth and strips of whitish gum. On both sides of the grin the cheeks had been blown out by the wind into pouches that fluttered slightly. To right and left of the hurtling face under the crash-helmet, the black gauntlets, broken-wristed at the controls, looked like the attacking paws of a big animal.

The man was dressed in the uniform of a dispatch-rider in the Royal Corps of Signals, and his machine, painted olive green, was, with certain modifications to the valves and the carburettor and the removal of some of the silencer baffles to give more speed, identical with a standard British Army machine. There was nothing in the man or his equipment to suggest that he was not what he appeared to be, except a fully loaded Luger held by a clip to the top of the petrol tank.

It was seven o’clock on a May morning and the dead straight road through the forest glittered with the tiny luminous mist of spring. On both sides of the road the moss- and flower-carpeted depths between the great oak trees held the theatrical enchantment of the royal forests of Versailles and St Germain. The road was D.98, a secondary road serving local traffic in the St Germain area, and the motor-cyclist had just passed beneath the Paris-Mantes autoroute already thundering with commuter traffic for Paris. He was heading north towards St Germain and there was no one else in sight in either direction, except, perhaps half a mile ahead, an almost identical figure–another Royal Corps dispatch-rider. He was a younger, slimmer man and he sat comfortably back on his machine, enjoying the morning and keeping his speed to around forty. He was well on time and it was a beautiful day. He wondered whether to have his eggs fried or scrambled when he got back to H.Q. around eight.

Five hundred yards, four hundred, three, two, one. The man coming up from behind slowed to fifty. He put his right gauntlet up to his teeth and pulled it off. He stuffed the gauntlet between the buttons of his tunic and reached down and unclipped the gun.

By now he must have been big in the driving-mirror of the young man ahead, for suddenly the young man jerked his head round, surprised to find another dispatch-rider on his run at that time of the morning. He expected that it would be an American or perhaps French military police. It might be anyone from the eight NATO nations that made up the staff of SHAPE, but when he recognized the uniform of the Corps he was astonished and delighted. Who the hell could it be? He raised a cheerful right thumb in recognition and cut his speed to thirty, waiting for the other man to drift up alongside. With one eye on the road ahead and the other on the approaching silhouette in the mirror, he ran through the names of the British riders in the Special Service Transportation Unit at Headquarters Command. Albert, Sid, Wally–might be Wally, same thick build. Good show! He’d be able to pull his leg about that little frog bit in the canteen–Louise, Elise, Lise–what the hell was her name.

The man with the gun had slowed. Now he was fifty yards away. His face, undistorted by the wind, had set into blunt, hard, perhaps Slav lines. A red spark burned behind the black, aimed muzzles of the eyes. Forty yards, thirty. A single magpie flew out of the forest ahead of the young dispatch-rider. It fled clumsily across the road into the bushes behind a Michelin sign that said that St Germain was one kilometre to go. The young man grinned and raised an ironical finger in salute and self-protection–‘One magpie is sorrow.’

Twenty yards behind him the man with the gun took both hands off the handle-bars, lifted the Luger, rested it carefully on his left forearm and fired one shot.

The young man’s hands whipped off his controls and met across the centre of his backward-arching spine. His machine veered across the road, jumped a narrow ditch and ploughed into a patch of grass and lilies of the valley. There it rose up on its screaming back wheel and slowly crashed backwards on top of its dead rider. The B.S.A. coughed and kicked and tore at the young man’s clothes and at the flowers, and then lay quiet.