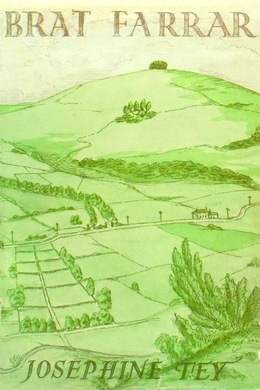 What begins as a ploy to claim an inheritance ends with the impostor’s life hanging in the balance. In this tale of mystery and suspense, a stranger enters the inner sanctum of the Ashby family posing as Patrick Ashby, the heir to the family’s sizable fortune. The stranger, Brat Farrar, has been carefully coached on Patrick’s mannerism’s, appearance, and every significant detail of Patrick’s early life, up to his thirteenth year when he disappeared and was thought to have drowned himself. It seems as if Brat is going to pull off this most incredible deception until old secrets emerge that jeopardize the imposter’s plan and his life. Culminating in a final terrible moment when all is revealed, Brat Farrar is a precarious adventure that grips the reader early and firmly and then holds on until the explosive conclusion.

“Don’t eat out of the point of your spoon, Jane.”

“I can’t mobilise the strings out of the side.”

Jane looked across at her twin, negotiating the vermicelli with smug neatness.

“She has a stronger suck than I have.”

“Aunt Bee has a face like a very expensive cat,” Ruth said, eyeing her aunt sideways.

Bee privately thought that this was a very good description, but wished that Ruth would not be quaint.

“No, but which was the cleverest?” said Jane, who never departed from a path once her feet were on it.

“Was it Noah or Ulysses? Simon, which was it, do you think?”

“Ulysses,” said her brother, not looking up from his paper.

It was so like Simon, Bee thought, to be reading the list of runners at Newmarket, peppering his soup, and listening to the conversation at one and the same time.

“He hadn’t Noah’s good Met. service. Whereabouts was Firelight in the Free Handicap, do you remember?”

“A coming-of-age is a little like a wedding, isn’t it, Simon?” This was Ruth.

“Better on the whole.”

“You can stay and dance at your own coming of age. Which you can’t at your wedding.”

“I shall stay and dance at my wedding.”

Oh, dear, thought Bee, I suppose there are families that have conversation at meals, but I don’t know how they manage it. Perhaps I haven’t been strict enough.

She looked down the table at the three bent heads, and Eleanor’s still vacant place, and wondered if she had done right by them. Would Bill and Nora be pleased with what she had made of their children? If by some miracle they could walk in now, young and fine-looking and gay as they had gone to their deaths, would they say: “Ah, yes, that is just how we pictured them; even to Jane’s ragamuffin look.”

Bee’s eyes smiled as they rested on Jane.

The twins were nine-going-on-ten and identical. Identical, that is to say, in the technical sense. In spite of their physical resemblance there was never any doubt as to which was Jane and which was Ruth. They had the same straight flaxen hair, the same small-boned face and pale skin, the same direct gaze with a challenge in it; but there the identity stopped. Jane was wearing rather grubby jodhpurs and a shapeless jersey festooned with pulled ends of wool. Her hair was pushed back without aid of mirror and held in the uncompromising clasp of a kirby-grip so old that it had reverted to its original steel colour, as old hairpins do. She was slightly astigmatic and, when in the presence of Authority, was in the habit of wearing horn-rimmed spectacles. Normally they lived in the hip pocket of her breeches, and they had been lain-upon, leant-upon, and sat-upon so often that she lived in a permanent state of bankruptcy: breakages over the yearly allowance having to be paid for out of her money-box. She rode to and fro to lessons at the Rectory on Fourposter, the old white pony; her short legs sticking out on either side of him like straws. Fourposter had long ago become a conveyance rather than a ride, so it did not matter that his great barrel was as manageable as a feather-bed and almost as wide.

Ruth, on the other hand, wore a pink cotton frock, as fresh as when she had set off on her bicycle that morning for the Rectory. Her hands were clean and the nails unbroken, and somewhere she had found a pink ribbon and had tied the two side-pieces of her hair in a bow on the top of her head.

Eight years, Bee was thinking. Eight years of contriving, conserving, and planning. And in six weeks’ time her stewardship would come to an end. In little more than a month Simon would be twenty-one, and would inherit his mother’s fortune and the lean years would be over. The Ashbys had never been rich but while her brother lived there was ample to keep Latchetts–the house and the three farms on the estate–as it should be kept. Only his sudden death had accounted for the near-poverty of those eight years. And only Bee’s own resolution accounted for the fact that her sister-in-law’s money would, next month, come to her son intact. There had been no borrowing on the strength of that future inheritance. Not even when Mr. Sandal, of Cosset, Thring and Noble, had been prepared to countenance it. Latchetts must pay its way, Bee had said. And Latchetts, after eight years, was still self-supporting and solvent.