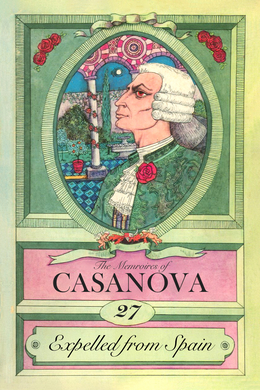 I make a mistake and Manucci becomes my mortal foe and seeks his vengeance. I leave Madrid and head to Saragossa, then on to Valentia before arriving in Barcelona. Due to my my imprudence I am imprisoned. On my release I depart from Barcelona. Madame Castelbajac at Montpellier. During my stay at Aix I fall ill and cared for by an unknown lady. I depart again my departure and head to Marsellies. A brief history of Nina. Then onto Nice, Turin, Lugano, The punishment of Marazzani – I leave lugano and head back to Turin, before a meeting with –m. Dubois at Parma. The duke of Orloff. Then onto Pisa, Stratico, Sienna. The marchioness Chigi. My departure from Sienna with an Englishwoman.

If these Memoirs, only written to console me in the dreadful weariness which is slowly killing me in Bohemia–and which, perhaps, would kill me anywhere, since, though my body is old, my spirit and my desires are as young as ever–if these Memoirs are ever read, I repeat, they will only be read when I am gone, and all censure will be lost on me.

Nevertheless, seeing that men are divided into two sections, the one and by far the greater composed of the ignorant and superficial, and the other of the learned and reflective, I beg to state that it is to the latter I would appeal. Their judgment, I believe, will be in favour of my veracity, and, indeed, why should I not be veracious? A man can have no object in deceiving himself, and it is for myself that I chiefly write.

Hitherto I have spoken nothing but the truth, without considering whether the truth is in my favour or no. My book is not a work of dogmatic theology, but I do not think it will do harm to anyone; while I fancy that those who know how to imitate the bee and to get honey from every flower will be able to extract some good from the catalogue of my vices and virtues.

After this digression (it may be too long, but that is my business and none other’s), I must confess that never have I had so unpleasant a truth to set down as that which I am going to relate. I committed a fatal act of indiscretion–an act which after all these years still gives my heart a pang as I think of it.

The day after my conquest I dined with the Venetian ambassador, and I had the pleasure of hearing that all the ministers and grandees with whom I had associated had the highest possible opinion of me. In three or four days the king, the royal family, and the ministers would return to town, and I expected to have daily conferences with the latter respecting the colony in the Sierra Morena, where I should most probably be going. Manucci, who continued to treat me as a valued friend, proposed to accompany me on my journey, and would bring with him an adventuress, who called herself Porto-Carrero, pretending to be the daughter or niece of the late cardinal of that name, and thus obtained a good deal of consideration; though in reality she was only the mistress of the French consul at Madrid, the Abbe Bigliardi.

Such was the promising state of my prospects when my evil genius brought to Madrid a native of Liege, Baron de Fraiture, chief huntsman of the principality, and a profligate, a gamester, and a cheat, like all those who proclaim their belief in his honesty nowadays.

I had unfortunately met him at Spa, and told him I was was going to Portugal. He had come after me, hoping to use me as a means of getting into good society, and of filling his pocket with the money of the dupes he aspired to make.

Gamesters have never had any proof of my belonging to their infernal clique, but they have always persisted in believing that I too am a “Greek.”

As soon as this baron heard that I was in Madrid he called on me, and by dint of politeness obliged me to receive him. I thought any small civilities I might shew or introductions I might give could do me no harm. He had a travelling companion to whom he introduced me. He was a fat, ignorant fellow, but a Frenchman, and therefore agreeable. A Frenchman who knows how to present himself, who is well dressed, and has the society air, is usually accepted without demur or scrutiny. He had been a cavalry captain, but had been fortunate enough to obtain an everlasting furlough.

Four or five days after his appearance the baron asked me quietly enough to lend him a score of louis, as he was hard up. I replied as quietly, thanking him for treating me as a friend, but informing him that I really could not lend him the money, as I wanted what little I had for my own necessities.

“But we can do good business together, and you cannot possibly be moneyless.”

“I do not know anything about good business, but I do know that I want my money and cannot part with it.”

“We are at our wits’ end to quiet our landlord; come and speak to him.”

“If I were to do so I should do you more harm than good. He would ask me if I would answer for you, and I should reply that you are one of those noblemen who stand in need of no surety. All the same, the landlord would think that if I did not stand your surety, it must be from my entertaining doubts as to your solvency.”

I had introduced Fraiture to Count Manucci, on the Pando, and he requested me to take him to see the count, to which request I was foolish enough to accede.

A few days later the baron opened his soul to Manucci.

He found the Venetian disposed to be obliging, but wary. He refused to lend money himself, but introduced the baron to someone who lent him money on pledges without interest.