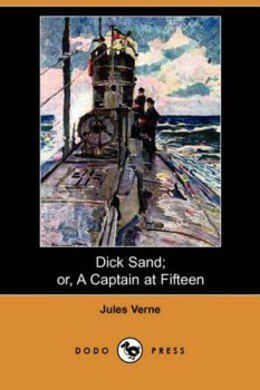 A Captain at Fifteen

Jules Verne presents an amazing tale of adventure and courage of a fifteen year old boy Dick Sands. Being the only survivor of a whale hunt in the Pacific Ocean, he becomes the captain of his ship and struggles hard to reach to the South American coast. The story depicts the human attributes of jealousy, revenge and lust of power in an appealing manner.

This vessel, of four hundred tons, fitted out at San Francisco for whale–fishing in the southern seas, belonged to James W. Weldon, a rich Californian ship–owner, who had for several years intrusted the command of it to Captain Hull.

The “Pilgrim” was one of the smallest, but one of the best of that flotilla, which James W. Weldon sent each season, not only beyond Behring Strait, as far as the northern seas, but also in the quarters of Tasmania or of Cape Horn, as far as the Antarctic Ocean. She sailed in a superior manner. Her very easily managed rigging permitted her to venture, with a few men, in sight of the impenetrable fields of ice of the southern hemisphere. Captain Hull knew how to disentangle himself, as the sailors say, from among those icebergs, which, during the summer, drift by the way of New Zealand or the Cape of Good Hope, under a much lower latitude than that which they reach in the northern seas of the globe. It is true that only icebergs of small dimensions were found there; they were already worn by collisions, eaten away by the warm waters, and the greater number of them were going to melt in the Pacific or the Atlantic.