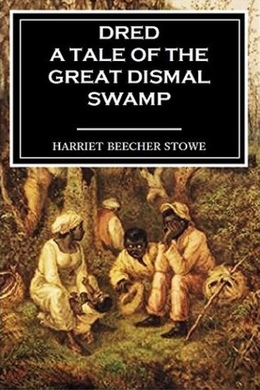 A Tale of the Great Dismal Swamp

Harriet Beecher Stowe’s second antislavery novel was written partly in response to the criticisms of Uncle Tom’s Cabin by both white Southerners and black abolitionists. In Dred, Stowe attempts to explore the issue of slavery from an African American perspective.

Through the compelling stories of Nina Gordon, the mistress of a slave plantation, and Dred, a black revolutionary, Stowe brings to life conflicting beliefs about race, the institution of slavery, and the possibilities of violent resistance. Probing the political and spiritual goals that fuel Dred’s rebellion, Stowe creates a figure far different from the acquiescent Christian martyr Uncle Tom.

“Oh, those bills!–Yes–well, here goes–here–perhaps in this box. No–that’s my opera-hat. By the bye, what do you think of that? Isn’t that bunch of silver wheat lovely? Stop a bit–you shall see it on me.”

And, with these words, the slight little figure sprang up as if it had wings, and, humming a waltzing-tune, skimmed across the room to a looking-glass, and placed the jaunty little cap on the gay little head, and then, turning a pirouette on one toe, said, “There, now!”

“There, now!” Ah, Harry! ah, mankind generally! the wisest of you have been made fools of by just such dancing, glittering, fluttering little assortments of curls, pendants, streamers, eyes, cheeks, and dimples!

The little figure, scarce the height of the Venus, rounded as that of an infant, was shown to advantage by a coquettish morning-dress of buff muslin, which fluttered open in front to display the embroidered skirt, and trim little mouse of a slipper. The face was one of those provoking ones which set criticism at defiance. The hair, waving, curling, dancing hither and thither, seemed to have a wild, laughing grace of its own; the brown eyes twinkled like the pendants of a chandelier; the little, wicked nose, which bore the forbidden upward curve, seemed to assert its right to do so with a saucy freedom; and the pendants of multiplied brilliants that twinkled in her ears, and the nodding wreath of silver wheat that set off her opera-hat, seemed alive with mischief and motion.

“Well, what do you think?” said a lively, imperative voice,–just the kind of voice that you might have expected from the figure.

The young man to whom this question was addressed was a well-dressed, gentlemanly person of about thirty-five, with dark complexion and hair, and deep, full blue eyes. There was something marked and peculiar in the square, high forehead, and the finely-formed features, which indicated talent and ability; and the blue eyes had a depth and strength of color that might cause them at first glance to appear black. The face, with its strongly-marked expression of honesty and sense, had about it many careworn and thoughtful lines. He looked at the little, defiant fay for a moment with an air of the most entire deference and admiration; then a heavy shadow crossed his face, and he answered, abstractedly, “Yes, Miss Nina, everything you wear becomes pretty–and that is perfectly charming.”

“Isn’t it, now, Harry? I thought you would think so. You see, it’s my own idea. You ought to have seen what a thing it was when I first saw it in Mme. Le Blanche’s window. There was a great hot-looking feather on it, and two or three horrid bows. I had them out in a twinkling, and got this wheat in–which shakes so, you know. It’s perfectly lovely!–Well, do you believe, the very night I wore it to the opera, I got engaged?”

“It seems to me that’s a very serious thing, Miss Nina.”

“Serious!–ha! ha! ha!” said the little beauty, seating herself on one arm of the sofa, and shaking the glittering hat back from her eyes. “Well, I fancy it was–to him, at least. I made him serious, I can tell you!”

“But is this true, Miss Nina? Are you really engaged?”

“Yes, to be sure I am–to three gentlemen; and going to stay so till I find which I like best. May be, you know, I shan’t like any of them.”

“To be sure!–Can’t you understand English, Harry? I am now–fact.”

“Miss Nina, is that right?”

“Right?–why not? I don’t know which to take–I positively don’t; so I took them all on trial, you know.”

“Pray, Miss Nina, tell us who they are.”

“Well, there’s Mr. Carson;–he’s a rich old bachelor–horridly polite–one of those little, bobbing men, that always have such shiny dickies and collars, and such bright boots, and such tight straps. And he’s rich–and perfectly wild about me. He wouldn’t take no for an answer, you know; so I just said yes, to have a little quiet. Besides, he is very convenient about the opera and concerts, and such things.”

“Well, the next is George Emmons. He’s one of your pink-and-white men, you know, who look like cream-candy, as if they were good to eat. He’s a lawyer, of a good family,–thought a good deal of, and all that. Well, really, they say he has talents–I’m no judge. I know he always bores me to death; asking me if I have read this or that–marking places in books that I never read. He’s your sentimental sort–writes the most romantic notes on pink paper, and all that sort of thing.”