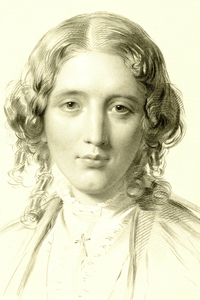 Harriet Beecher Stowe was an American abolitionist and author. Stowe’s novel Uncle Tom’s Cabin depicted life for African-Americans under slavery; it reached millions as a novel and play, and became influential in the U.S. and Britain and made the political issues of the 1850s regarding slavery tangible to millions, energizing anti-slavery forces in the American North, while provoking widespread anger in the South. Upon meeting Stowe, Abraham Lincoln allegedly remarked, “So this is the little lady who started this great war!” (source: Wikipedia)

And this holy time, so hallowed and so gracious, was settling down over the great roaring, rattling, seething life–world of New York in the good year 18...read more »

Harriet Beecher Stowe’s second antislavery novel was written partly in response to the criticisms of Uncle Tom’s Cabin by both white Southerners and bla...read more »

In 1867, Stowe settled in a small cottage in Mandarin, Florida, overlooking the St. Johns River. She had promised her Boston publisher another novel bu...read more »

Once there was a nice young hen that we will call Mrs. Feathertop. She was a hen of most excellent family, being a direct descendant of the Bolton Grays...read more »

The rural tranquillity of the lonely, pine-girthed shores of the Maine coast is the setting for this beautiful novel of conflicting aspirations written ...read more »

This book published in 1886 in New York, is a collection, containing the following individual essays: The Salem Witchcraft, A History Of Salem Witchcraf...read more »

Harriet Beecher Stowe was appalled by slavery, and she took one of the few options open to nineteenth-century women who wanted to affect public opinion:...read more »