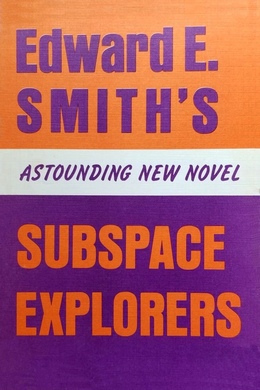 Bursting right through the four-dimensional travel zone of subspace, Tellurian psiontists make an amazing discovery on the other side. Beyond the bounds of subspace, a parallel universe is cruelly ruled by a violent, murderous empire, the Justiciate, where psiontists are ruthlessly hunted down and fed to giant eagles. And within the Justiciate are lodged spies and traitors, dedicated to its overthrow - evil agents of the proud Garshan ‘master race’. The arrival of the psiontists from Tellus triggers off a truly spectacular space adventure…

The novel is an expansion of Smith’s earlier story Subspace Survivors.

At time zero minus nine minutes First Officer Carlyle Deston, Chief Electronicist of the starliner Procyon, sat attentively at his board. He was five feet eight inches tall and weighed one hundred sixty two pounds. Just a little guy, as spacemen go. Although narrow-waisted and, for his heft, broad-shouldered, he was built for speed and maneuverability, not to handle freight.

Watching a hundred lights and half that many instruments; listening to four telephone circuits, two with each ear; hands flashing to toggles and buttons and knobs; he was completely informed as to the instant-by-instant condition of everything in his department during count-down. Everything had been and still was in condition GO.

Nevertheless, he was bothered; bothered as he had never been bothered before in all his three years of subspacing. He had always had hunches and they had always been right, but this one was utterly ridiculous. It wasn’t the ship or the trip–nothing was yelling “DANGER!” into his mind–it was something down in the Middle that was pulling at him like a cat tractor and it didn’t make sense. He never went down into passenger territory. He had no business there and flirting with vac-skulled girls was not his dish.

So he fought his hunch down and concentrated on his job. Lift-off was uneventful; so was the climb out to a safe distance from Earth. At time zero minus two seconds Deston poised a fingertip over the red button, but everything stayed in condition GO and immergence into subspace was perfectly normal. All the green lights except one went out; all the needles dropped to zero; all four phones went dead; all signals stopped. He plugged a jack into the socket under the remaining green light and said:

“Procyon One to Control Six. Flight eight four nine. Subspace radio test number one. How do you read me, Control Six?”

“Control Six to Procyon One. I read you ten and zero. How do you read me, Procyon One?”

“Ten and zero. Out.” The solitary green light went out and Deston unplugged.

Perfect signal and zero noise. That was that. From now until Emergence–unless some robot or computer called for help–he might as well be a passenger. He leaned back in his seat, lit a cigarette, and began really to study this wild hunch, that was getting worse all the time. It was all he could do to keep from calling his relief and going down there right then; but he couldn’t and wouldn’t do that. He was on until plus three hours. He couldn’t possibly explain any such break as that would be, so he stuck it out.

At time zero plus one hundred seventy nine minutes his relief appeared. “All black, Babe?” the newcomer asked.

“As the pit, Eddie. Take over. You’ve picked out your girl-friend for the trip, I suppose?”

While taking the bucket seat, Eddie said, “Not yet. I got sidetracked watching Bobby Warner…”

A wave of psychic force hit Deston’s mind hard enough almost to turn it inside out; but he clenched his teeth and held his pose.

“…and after seeing her just walk across the lounge once, all the other women looked like a dime’s worth of catmeat. Talk about poetry in motion!” Eddie rolled his eyes, made motions with his hands, and whistled expressively. “Oh, brother!”

“Okay, okay, don’t blow a fuse,” Deston said, in what he hoped was his usual tone and manner. “I know. You’ll love her undyingly–all this trip, maybe.”

“Huh? How dumb can you get? D’you think I’d even try to play footsie with Barbara Warner?”

“You play footsie with the pick of the passenger list, so who’s Barbara Warner, to daunt Don Juan Eddie Thompson, the Tomcat of Space?”

“I thought you knew some of the facts of life, Babe. She’s Warner’s only child, is all. Warner of WarnOil; the biggest in all space. Operates in every solar system known to man and never puts down a dry hole. All gushers that blow their rigs clear up into the stratosphere. Everybody wonders how come. The poop is, his wife’s an oil-witch, is why he lugs her around with him all the time. Why else would he?”

“Maybe he loves her. It happens, you know.”

“Huh? After twenty-some years of her? Comet-gas! Anyway, would you have the sublime gall to make a pass at WarnOil’s heiress, with more millions in her own sock than you’ve got dimes? If you ever made passes, I mean.”

“You nor me neither. But what a dish! Brother, what a lovely, luscious, toothsome dish!”

“Cheer up; you’ll be raving about another one tomorrow,” Deston said callously, turning away.

“I don’t know…maybe; but even if I do, she won’t be anything like her,” Eddie mourned, to the closing door.

Deston didn’t go to his cabin; didn’t take off his sidearm. He didn’t even think of it; the .41 automatic at his hip was as much a part of his uniform as his pants.