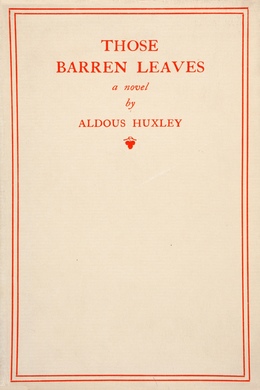 Huxley spares no one in his ironic, piercing portrayal of a group gathered in an Italian palace by the socially ambitious and self-professed lover of art, Mrs. Aldwinkle. Here, Mrs. Aldwinkle yearns to recapture the glories of the Italian Renaissance, but her guests ultimately fail to fulfill her naive expectations. Among her entourage are: a suffering poet and reluctant editor of the “Rabbit Fanciers’ Gazette” who silently bears the widowed Mrs. Aldwinkle’s desperate advances; a popular novelist who records every detail of her affair with another guest, the amorous Calamy, for future literary endeavors; and an aging sensualist philosopher who pursues a wealthy yet mentally-disabled heiress. Stripping the houseguests of their pretensions, Huxley reveals the superficiality of the cultural elite. Deliciously satirical, Those Barren Leaves bites the hands of those who dare to posture or feign sophistication and is as comically fresh today as when first published.

The little town of Vezza stands at the confluence of two torrents that come down in two deep valleys from the Apuan mountains. Turbulently—for they still remember their mountain source—the united streams run through the town; silence in Vezza is the continuous sound of running waters. Then, gradually, the little river changes its character; the valley broadens out, soon the hills are left behind and the waters, grown placid as a Dutch canal, glide slowly through the meadows of the coastal plain and mingle with the tideless Mediterranean.

Dominating Vezza itself, a bold promontory of hill juts out like a wedge between the two valleys. Near the top of the hill and set in the midst of ilex trees and tall cypresses that rise up blackly out of the misty olives, stands a huge house. A solemn and regular façade, twenty windows wide, looks down over the terraced cypresses and the olive trees on to the town. Behind and above this façade one sees irregular masses of buildings climbing up the slopes beyond. And the whole is dominated by a tall slender tower that blossoms out at the top, after the manner of Italian towers, into overhanging machicolations. It is the summer palace of the Cybo Malaspina, one-time Princes of Massa and Carrara, Dukes of Vezza, and marquesses, counts and barons of various other villages in the immediate neighbourhood.

The road is steep that leads up from Vezza to the palace of the Cybo Malaspina, perched on the hill above the town. The Italian sun can shine most powerfully, even in September, and olive trees give but little shade. The young man with the peaked cap and the leather wallet slung over his shoulder pushed his bicycle slowly and wearily up the hill. Every now and then he halted, wiped his face and sighed. It was on an evil day, he was thinking, on a black, black day for the poor postmen of Vezza that the insane old English-woman with the impossible name bought this palace; and a blacker day still when she had elected to come and live in it. In the old days the place had been quite empty. A couple of peasant families had lived in the out-houses; that was all. Not more than one letter a month between them, and as for telegrams—why, there had never been a telegram for the palace in all the memory of man. But those happy days were now over, and what with letters, what with packets of newspapers and parcels, what with expresses and telegrams, there was never a day and scarcely an hour in the day when some one from the office wasn’t toiling up to this accursed house.

True, the young man went on thinking, one got a good tip for bringing a telegram or an express. But being a young man of sense, he preferred leisure, if a choice had to be made, to money. The expense of energy was not to be compensated for by the three francs he would receive at the end of the climb. Money brings no satisfaction if one has to work for it; for if one works for it one has no time to spend it.

The ideal, he reflected, as he replaced his cap and once more started climbing, the ideal would be to win a big prize in the lottery. A really immense prize.

He took out of his pocket a little slip of paper which had been given him only this morning by a beggar in exchange for a couple of soldi. It was printed with rhymed prophecies of good fortune—and what good fortune! The beggar had been very generous. He would marry the woman of his heart, have two children, become one of the most prosperous merchants of his city, and live till eighty-three. To these oracles he gave small faith. Only the last verse seemed to him—though he would have found it difficult to explain why—worthy of serious attention. The last verse embodied a piece of specific good advice.

He read through the verse several times until he had got it by heart; then folded up the paper and put it away again. Seven, sixteen and fifty-eight—there certainly was something very attractive about those numbers.