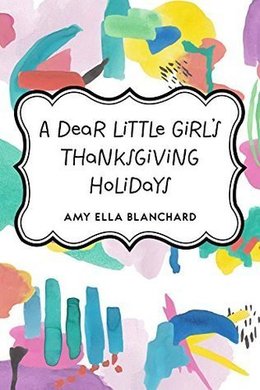 A delightful tale of love and tenderness during the Thanksgiving holidays, filled with charming detail, dialog and written with passion, joy and enthusiasm. In this fourth and final installment from the author’s Dear Little Girl series, young readers will be will inspired to celebrate with equal good-will, love and amusement. In this episode, Edna Conway spends a most delightful Thanksgiving at her grandmother’s.

“Any news, mother?” asked Edna one Friday afternoon when she came home from school.

“There’s a letter from grandma,” replied Mrs. Conway after kissing the lips held up to hers. “There isn’t any real news in it, but there is an invitation.”

“What kind of an invitation?”

“I mean that grandma wants us all to spend an old-fashioned Thanksgiving with her; the kind she used to have when she was young. She says she and grandpa are both getting old and they may not be able to have the whole family there together again.”

“I think perhaps you and I will go on a day or two ahead and let the others follow. Celia and the boys can come with your father, who probably could not get off till Wednesday afternoon. Grandma asks that I bring my baby with me.”

“And that means me,” returned Edna, hugging herself. “How long shall we stay, mother?”

“That depends upon several things which will have to be learned later, so I can’t tell just yet.”

Edna danced off to hunt up her brothers that she might tell them the news. She found them in their little workshop over the stable. Charlie was making a new box to put in his pigeon house and Frank was watching him. They had not seen their little sister since Monday for she and her sister Celia went to school in the city, remaining until the Friday afternoon of each week.

“Hello!” cried Charlie, looking up. “When did you come?”

“Oh, we’ve just come, only a few minutes ago, and what do you think is the news?”

“The Dutch have taken Holland,” returned Charlie, hammering away at his box. “Just hand me that box of nails, Frank, won’t you?”

“I didn’t expect you to know it, only to guess.”

“Well, I guessed,” replied Charlie teasingly. “I suppose it’s a foolish sort of thing; Uncle Justus has grown another hair in his eyebrows or your friend Dorothy has a new hat.”

“It’s nothing so unimportant,” Edna continued; “for it concerns you boys, too, but if you don’t want to know I’ll go up to Dorothy’s; she’ll be interested even if she isn’t going.”

“Going? Where?” cried both boys.

“That’s for me to know and for you to find out,” retorted Edna, beginning to scramble down the ladder. Both boys darted after; Charlie swung himself down ahead of her to the floor below and was ready to grab her before she reached the last rung. Then there was much laughing, scrambling, tickling and protesting till at last Edna was compelled to give up her secret, ending triumphantly with: “And I’m going first with mother.”

“Who said so?” questioned Charlie.

“Mother did. We are to go two or three days ahead of anyone else.”

“Oh, well, I don’t care,” returned Charlie. “There wouldn’t be any boys for me to play with anyhow.”

“How many are coming for Thanksgiving?” asked Frank.

“I don’t know exactly,” Edna answered, “but I suppose all the aunts and cousins and uncles that can get there. Aunt Lucia and Uncle Bert and of course Aunt Alice and her boys, Ben and his brother. Ben will have to go, and I’m awfully glad; he’s my favoritest cousin.”

“He is not any relation to grandma and grandpa Willis, is he?”

“I don’t know; I never could get relations straight. I hope he isn’t any kin to them and I am sorry he is to us, for he is a pill. You know he is, no matter what you say. Just look how he acted last summer. You needn’t try to excuse him, for Dorothy told me all about it.”

Edna could not deny facts, for it was quite true that her cousin Louis was not above blame in sundry instances, so she changed the subject by saying, “I think I’ll go over to Dorothy’s anyhow.”

The boys did not try to detain her and she ran out along the road and up to the old-fashioned house where her friend Dorothy Evans lived. Dorothy was playing with her kitten out on the side porch. She had dressed the little creature in long clothes and was walking up and down singing to it as it lay contentedly in her arms, it’s two gray paws sticking out from the sleeves of a little red sacque belonging to one of Dorothy’s dolls.

“Doesn’t Tiddlywinks look funny?” said Dorothy by way of greeting. “And isn’t he good? I believe he likes to be dressed up, for he lies as still as anything. Of course, if he fussed and meowed, I would take off the things and let him go.”

Edna touched the soft silvery paws gently. “I believe he does like it,” she returned. “See, he shuts his eyes exactly as if he felt nice and cozy. Oh, Dorothy, guess what! We are all going to grandpa Willis’s next week. We are all going for Thanksgiving, only mother and I are going first. Isn’t that lovely?”

“Lovely for you, I suppose,” replied Dorothy dejectedly, “but I shall miss you dreadfully.”