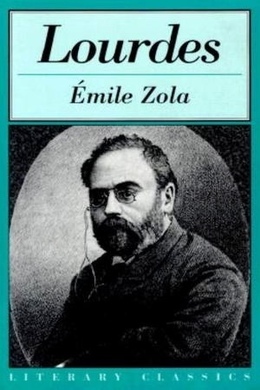 In this moving depiction of a pilgrimage to Lourdes, the master French realist has created a novel of vivid characters and subtle commentary on suffering and the belief in miracles as the last desperate refuge from pain. Based on his own trip to the fabled grotto, the novel follows a simple five-part structure corresponding to the five-day train trip from Paris to Lourdes and back.

Zola’s brilliant observational powers are at their best as he moves from character to character describing in great detail the physical effects of their illnesses, their hopes, beliefs, fears, and above all endurance.

The pilgrims and patients, closely packed on the hard seats of a third-class carriage, were just finishing the “Ave maris Stella,” which they had begun to chant on leaving the terminus of the Orleans line, when Marie, slightly raised on her couch of misery and restless with feverish impatience, caught sight of the Paris fortifications through the window of the moving train.

“Ah, the fortifications!” she exclaimed, in a tone which was joyous despite her suffering. “Here we are, out of Paris; we are off at last!”

Her delight drew a smile from her father, M. de Guersaint, who sat in front of her, whilst Abbe Pierre Froment, who was looking at her with fraternal affection, was so carried away by his compassionate anxiety as to say aloud: “And now we are in for it till to-morrow morning. We shall only reach Lourdes at three-forty. We have more than two-and-twenty hours’ journey before us.”

It was half-past five, the sun had risen, radiant in the pure sky of a delightful morning. It was a Friday, the 19th of August. On the horizon, however, some small, heavy clouds already presaged a terrible day of stormy heat. And the oblique sunrays were enfilading the compartments of the railway carriage, filling them with dancing, golden dust.

“Yes, two-and-twenty hours,” murmured Marie, relapsing into a state of anguish. “Mon Dieu! what a long time we must still wait!”

Then her father helped her to lie down again in the narrow box, a kind of wooden gutter, in which she had been living for seven years past. Making an exception in her favour, the railway officials had consented to take as luggage the two pairs of wheels which could be removed from the box, or fitted to it whenever it became necessary to transport her from place to place. Packed between the sides of this movable coffin, she occupied the room of three passengers on the carriage seat; and for a moment she lay there with eyes closed. Although she was three-and-twenty; her ashen, emaciated face was still delicately infantile, charming despite everything, in the midst of her marvellous fair hair, the hair of a queen, which illness had respected. Clad with the utmost simplicity in a gown of thin woollen stuff, she wore, hanging from her neck, the card bearing her name and number, which entitled her to hospitalisation, or free treatment. She herself had insisted on making the journey in this humble fashion, not wishing to be a source of expense to her relatives, who little by little had fallen into very straitened circumstances. And thus it was that she found herself in a third-class carriage of the “white train,” the train which carried the greatest sufferers, the most woeful of the fourteen trains going to Lourdes that day, the one in which, in addition to five hundred healthy pilgrims, nearly three hundred unfortunate wretches, weak to the point of exhaustion, racked by suffering, were heaped together, and borne at express speed from one to the other end of France.

Sorry that he had saddened her, Pierre continued to gaze at her with the air of a compassionate elder brother. He had just completed his thirtieth year, and was pale and slight, with a broad forehead. After busying himself with all the arrangements for the journey, he had been desirous of accompanying her, and, having obtained admission among the Hospitallers of Our Lady of Salvation as an auxiliary member, wore on his cassock the red, orange-tipped cross of a bearer. M. de Guersaint on his side had simply pinned the little scarlet cross of the pilgrimage on his grey cloth jacket. The idea of travelling appeared to delight him; although he was over fifty he still looked young, and, with his eyes ever wandering over the landscape, he seemed unable to keep his head still–a bird-like head it was, with an expression of good nature and absent-mindedness.

However, in spite of the violent shaking of the train, which constantly drew sighs from Marie, Sister Hyacinthe had risen to her feet in the adjoining compartment. She noticed that the sun’s rays were streaming in the girl’s face.

“Pull down the blind, Monsieur l’Abbe,” she said to Pierre. “Come, come, we must install ourselves properly, and set our little household in order.”

Clad in the black robe of a Sister of the Assumption, enlivened by a white coif, a white wimple, and a large white apron, Sister Hyacinthe smiled, the picture of courageous activity. Her youth bloomed upon her small, fresh lips, and in the depths of her beautiful blue eyes, whose expression was ever gentle. She was not pretty, perhaps, still she was charming, slender, and tall, the bib of her apron covering her flat chest like that of a young man; one of good heart, displaying a snowy complexion, and overflowing with health, gaiety, and innocence.

“But this sun is already roasting us,” said she; “pray pull down your blind as well, madame.”