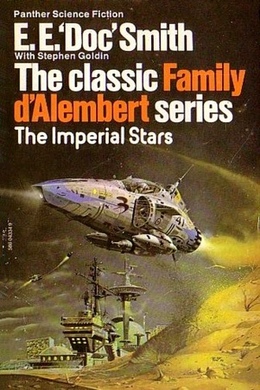 It’s the 25th Century, and humanity has colonized a great deal of the galaxy, including several worlds apparently inhospitable to homo sapiens. The form of government selected to unite scattered humanity is an old-fashioned Empire, with hereditary monarchs, powerful aristocracy, but, happily, no serfs.

A massive military and Secret Service is needed to keep this far-flung empire together. And you will be surprised at the hidden headquarters of the organization of spies and agents known as SOTE (Service of the Empire).

Note: this is the original novella by E. E. “Doc” Smith, not the expanded science fiction novel by Stephen Goldin.

For twenty-eight minutes The Flying d’Alemberts–who throughout two centuries had been the greatest troupe of aerialists of the entire Empire of Earth–had kept the vast audience of the Circus of the Galaxy spellbound: densely silent; almost tranced. For twenty-eight minutes both side rings had been empty and dark. The air over the center ring, from the hard-packed, imitation-sawdust-covered earth floor up to the plastic top one hundred forty-five feet above that floor, had been full of flying white-clad forms–singles and pairs and groups all doing something utterly breath-taking.

Suddenly, in perfect unison, eighteen of the twenty d’Alemberts then performing swung to their perches, secured their apparatus, and stood motionless, each with his or her right arm pointing upward at the highest part of the Big Top.

As all those arms pointed up at her, Yvette d’Alembert moved swiftly, smoothly, out to the middle of her high wire–and that wire was high indeed, being one hundred thirty-two feet above the floor of the ring. She did not carry even a fan for balance. She maintained her equilibrium by almost imperceptible movements of her hands, feet, and body. Reaching the center of the span, she stopped and posed. To the audience she appeared as motionless as a statue.

Like all the other d’Alemberts, she was dressed in silver-spangled tights that clung to every part of her body like a second skin. Thus, while she was too short and too wide and too thick to be acceptable as an Earthly high-fashion model, her flamboyantly female figure made a very striking and very attractive picture–at a distance. Close up, however, that picture changed.

Her ankles were much larger than any Earthwoman’s should have been. Her wrists were those of a six-foot-four, two-hundred-fifty-pound timberman. Her musculature, from toenails to ears to fingertips, would have made all the beach-boys of Southern California turn green with envy.

After a few seconds of posing, she turned her head and looked down at her brother Jules, on a perch sixty-one feet below her and an “impossible” sixty-four feet off to one side. Then, flexing her knees and swinging her horizontally outstretched arms in ever-increasing arcs, she put more and more power into her tightly stretched steel–and Jules, grasping a flying ring in his left hand, began to flex his knees and move his body in precise synchronization with the natural period of the girl-wire system so far above him. Finally, in the last cycle through which she could hold the wire, Yvette squatted and drove both powerful legs downward and to her right–and something snapped, with a harsh, metallic report as loud as a pistol shot.

The wire, all its terrific tension released instantly as one end broke free and dropped, coiled itself up in the air with metallic whinings and slitherings; and Yvette d’Alembert, premiere aerialiste of all civilization, sprawling helplessly in mid-air, began her long fall to the floor.

Eighteen d’Alemberts came to life on their perches, seized all the equipment they could reach, and hurled it all at the falling girl. One of her frantically reaching fingertips barely touched the bar of one swinging trapeze; none of the other apparatus came even close.

Jules, in the lowest position, had more time than did any of the others; but he did not have a millisecond to spare. In the instant of the break he went outward and downward along the arc of the ninety-eight-foot radius of his top-hung flying ring. His aim was true and the force of launching had been precisely right.

Yvette was falling face down, flat and horizontal, at a speed of over seventy feet a second as she neared the point of meeting. Jules, rigidly vertical at the bottom of his prodigious swing, was moving almost half that fast. In the instant before a right-angle collision that would have smashed any two ordinary athletes into masses of bloody flesh, two strong right hands smacked together in the practically unbreakable hand-over-wrist grip of the aerialist and Yvette spun and twisted like a cat–except much faster. Both her feet went flat against his hard, flat belly. Her hard-sprung knees and powerful leg muscles absorbed most of the momentum of his mass and speed. Then, at the last possible instant, her legs went around his waist and locked behind his back, and his right hand flashed up to join his left in gripping the ring.