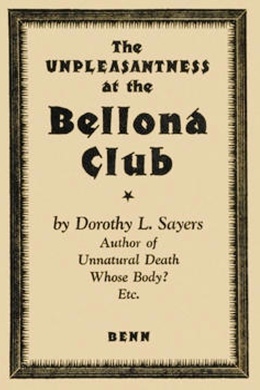 Unpleasantness at the Bellona Club

90-year-old General Fentiman was definitely dead, but no one knew exactly when he had died – and the time of death was the determining factor in a half-million-pound inheritance. Lord Peter Wimsey would need every bit of his amazing skills to unravel the mysteries of why the General’s lapel was without a red poppy on Armistice Day, how the club’s telephone was fixed without a repairman, and, most puzzling of all, why the great man’s knee swung freely when the rest of him was stiff with rigor mortis.

‘What in the world, Wimsey, are you doing in this Morgue?’ demanded Captain Fentiman, flinging aside the Evening Banner with the air of a man released from an irksome duty.

‘Oh, I wouldn’t call it that,’ retorted Wimsey amiably. ‘Funeral Parlour at the very least. Look at the marble. Look at the furnishings. Look at the palms and the chaste bronze nude in the corner.’

‘Yes, and look at the corpses. Place always reminds me of that old thing in Punch, you know–“Waiter, take away Lord Whatsisname, he’s been dead two days.” Look at Old Ormsby there, snoring like a hippopotamus. Look at my revered grandpa–dodders in here at ten every morning, collects the Morning Post and the armchair by the fire, and becomes part of the furniture till the evening. Poor old devil! Suppose I’ll be like that one of these days. I wish to God Jerry had put me out with the rest of ‘em. What’s the good of coming through for this sort of thing? What’ll you have?’

‘Dry Martini,’ said Wimsey. ‘And you? Two dry Martinis, Fred, please. Cheer up. All this remembrance-day business gets on your nerves, don’t it? It’s my belief most of us would only be too pleased to chuck these community hysterics if the beastly newspapers didn’t run it for all it’s worth. However, it don’t do to say so. They’d hoof me out of the Club if I raised my voice beyond a whisper.’

‘They’d do that anyway, whatever you were saying,’ said Fentiman gloomily. ‘What are you doing here?’

Fentiman nodded quietly. He knew that young Marchbanks had been killed at Hill 60, and that the Colonel was wont to give a small, informal dinner on Armistice night to his son’s intimate friends.

‘And how are things going with you?’ he asked.

‘Oh, rotten as usual. Tummy all wrong and no money. What’s the damn good of it, Wimsey? A man goes and fights for his country, gets his inside gassed out, and loses his job, and all they give him is the privilege of marching past the Cenotaph once a year and paying four shillings in the pound income tax. Sheila’s queer, too–overwork, poor girl. It’s pretty damnable for a man to have to live on his wife’s earnings, isn’t it? I can’t help it, Wimsey. I go sick and have to chuck jobs up. Money–I never thought of money before the War, but I swear nowadays I’d commit any damned crime to get hold of a decent income.’

Fentiman’s voice had risen in nervous excitement. A shocked veteran, till then invisible in a neighbouring armchair, poked out a lean head like a tortoise and said ‘Sh!’ viperishly.

‘Oh, I wouldn’t do that,’ said Wimsey lightly. ‘Crime’s a skilled occupation, y’know. Even a comparative imbecile like myself can play the giddy sleuth on the amateur Moriarty. If you’re thinkin’ of puttin’ on a false moustache and lammin’ a millionaire on the head, don’t do it. That disgustin’ habit you have of smoking cigarettes down to the last millimetre would betray you anywhere. I’d only have to come on with a magnifyin’ glass and a pair of callipers to say “The criminal is my dear old friend George Fentiman. Arrest that man!” You might not think it, but I am ready to sacrifice my nearest and dearest in order to curry favour with the police and get a par. in the papers.’

Fentiman laughed, and ground out the offending cigarette stub on the nearest ashtray.

‘I wonder anybody cares to know you,’ he said. The strain and bitterness had left his voice and he sounded merely amused.

‘They wouldn’t,’ said Wimsey, ‘only they think I’m too well-off to have any brains. It’s like hearing that the Earl of Somewhere is taking a leading part in a play. Everybody takes it for granted he must act rottenly. I’ll tell you my secret. All my criminological investigations are done for me by a ‘ghost’ at three pounds a week, while I get the headlines and frivol with well-known journalists at the Savoy.’

‘I find you refreshing, Wimsey,’ said Fentiman languidly. ‘You’re not in the least witty, but you have a kind of obvious facetiousness which reminds me of the less exacting class of music-hall.’

‘It’s the self-defence of the first-class mind against the superior person,’ said Wimsey. ‘But, look here, I’m sorry to hear about Sheila. I don’t want to be offensive, old man, but why don’t you let me–?’

‘Damned good of you,’ said Fentiman, ‘but I don’t care to. There’s honestly not the faintest chance I could ever pay you, and I haven’t quite got to the point yet–’