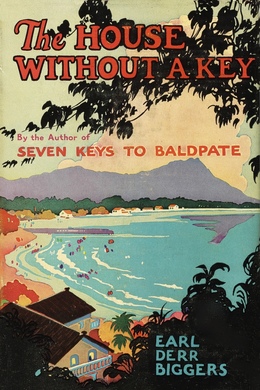 The House Without a Key

In this classic novel, Charlie Chan makes his debut as Inspector of the Honolulu Police Department. Earl Derr Biggers brings Honolulu to life with deft descriptions of the landscape and of its hybrid ethnic communities. With the creation of Detective Chan, Biggers also shatters stereotypes and was ahead of its time in highlighting the positive aspects of Chinese-Hawaiian culture, just as his skillful rendering of San Francisco is noteworthy of its modernity and keen sense of place.

Miss Minerva Winterslip was a Bostonian in good standing, and long past the romantic age. Yet beauty thrilled her still, even the semi-barbaric beauty of a Pacific island. As she walked slowly along the beach she felt the little catch in her throat that sometimes she had known in Symphony Hall, Boston, when her favorite orchestra rose to some new and unexpected height of loveliness.

It was the hour at which she liked Waikiki best, the hour just preceding dinner and the quick tropic darkness. The shadows cast by the tall cocoanut palms lengthened and deepened, the light of the falling sun flamed on Diamond Head and tinted with gold the rollers sweeping in from the coral reef. A few late swimmers, reluctant to depart, dotted those waters whose touch is like the caress of a lover. On the springboard of the nearest float a slim brown girl poised for one delectable instant. What a figure! Miss Minerva, well over fifty herself, felt a mild twinge of envy–youth, youth like an arrow, straight and sure and flying. Like an arrow the slender figure rose, then fell; the perfect dive, silent and clean.

“Better turn back, Amos,” suggested Miss Minerva. “Your dinner’s waiting. Thank you so much.”

“I’ll walk as far as the fence,” he said. “When you get tired of Dan and his carryings-on, come to us again. We’ll be glad to have you.”

“That’s kind of you,” she answered, in her sharp crisp way. “But I really must go home. Grace is worried about me. Of course, she can’t understand. And my conduct is scandalous, I admit. I came over to Honolulu for six weeks, and I’ve been wandering about these islands for ten months.”

She nodded. “I can’t explain it. Every day I make a solemn vow I’ll start packing my trunks–to-morrow.”

“And to-morrow never comes,” said Amos. “You’ve been taken in by the tropics. Some people are.”

He smiled wanly. “It’s a strain in the Winterslips,” he said. “Supposed to be Puritans, but always sort of yearning toward the lazy latitudes.”

“I know,” answered Miss Minerva, her eyes on that exotic shore line. “It’s what sent so many of them adventuring out of Salem harbor. Those who stayed behind felt that the travelers were seeing things no Winterslip should look at. But they envied them just the same–or maybe for that very reason.” She nodded. “A sort of gypsy strain. It’s what sent your father over here to set up as a whaler, and got you born so far from home. You know you don’t belong here, Amos. You should be living in Milton or Roxbury, carrying a little green bag and popping into a Boston office every morning.”

“I’ve often thought it,” he admitted. “And who knows–I might have made something of my life–”

They had come to a barbed-wire fence, an unaccustomed barrier on that friendly shore. It extended well down on to the beach; a wave rushed up and lapped the final post, then receded.

Miss Minerva smiled. “Well, this is where Amos leaves off and Dan begins,” she said. “I’ll watch my chance and run around the end. Lucky you couldn’t build it so it moved with the tide.”

“You’ll find your luggage in your room at Dan’s, I guess,” Amos told her. “Remember what I said about–” He broke off suddenly. A stocky, white-clad man had appeared in the garden beyond the barrier, and was moving rapidly toward them. Amos Winterslip stood rigid for a moment, an angry light flaming in his usually dull eyes. “Good-by,” he said, and turned.

“Amos!” cried Miss Minerva sharply. He moved on, and she followed. “Amos, what nonsense! How long has it been since you spoke to Dan?”

“That’s long enough,” she told him. “Now, come around that foolish fence of yours, and hold out your hand to him.”

“Not me,” said Amos. “I guess you don’t know Dan, Minerva, and the sort of life he’s led. Time and again he’s dishonored us all–”

“Why, Dan’s regarded as a big man,” she protested. “He’s respected–”

“And rich,” added Amos bitterly. “And I’m poor. Yes, that’s the way it often goes in this world. But there’s a world to come, and over there I reckon Dan’s going to get his.”

Hardy soul though she was, Miss Minerva was somewhat frightened by the look of hate on his thin face. She saw the uselessness of further argument. “Good-by, Amos,” she said. “I wish I might persuade you to come East some day–” He gave no sign of hearing, but hurried along the white stretch of sand.