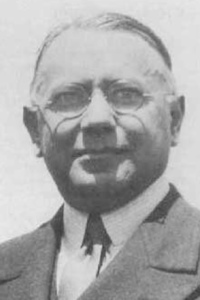 Earl Derr Biggers was an American novelist and playwright best remembered for his detective novels featuring the fictional Chinese American detective Charlie Chan, from which many films were made. His first successful novel Seven Keys to Baldpate became a hit Broadway stage play, and later adapted to seven different film versions. More than 10 years after this early success Biggers had even greater success with his series of Charlie Chan detective novels whose popularity extended even to China, where audiences in Shanghai appreciated these Hollywood films (source Wikipedia).

The third novel in the Charlie Chan series, set almost exclusively in California, tells the story of the former head of Scotland Yard, a detective who i...read more »

Inspector Duff, a Scotland Yard detective and friend of Chan’s, is pursuing a murderer on an around-the-world voyage; so far, there have been murders in...read more »

50 Candles starts in a courthouse in Honolulu, moves to China, then to fog-shrouded San Francisco. Many of the elements used in the Charlie Chan series ...read more »

In the 6th and final book in the mystery series featuring the Chinese-American detective Charlie Chan, we find our hero in Lake Tahoe, California. Chan ...read more »

In Charlie Chan’s fourth outing the ‘camel’, or death itself according to the Chinese proverb, has ‘knelt by the gate’ of a glamorous Hollywood actress ...read more »

A mysterious millionaire with a penchant for strange pets takes a flyer on a string of pearls and finds that death is the broker. Charlie Chan embarks o...read more »