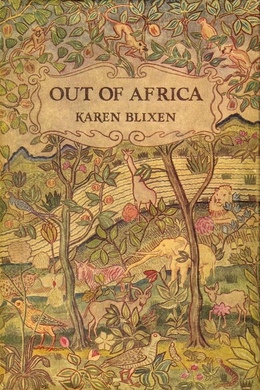 From the moment Karen Blixen arrived in Kenya in 1914 to manage a coffee plantation, her heart belonged to Africa. Drawn to the intense colours and ravishing landscapes, Karen Blixen spent her happiest years on the farm and her experiences and friendships with the people around her are vividly recalled in these memoirs. She describes her strong friendships with the people of the area, her affection for the landscape and animals, and great love for the adventurer Denys Finch-Hatton. Written with astonishing clarity and an unsentimental intelligence, Out of Africa is the story of a remarkable and unconventional woman and of a way of life that has vanished for ever.

I had a farm in Africa, at the foot of the Ngong Hills. The Equator runs across these highlands, a hundred miles to the North, and the farm lay at an altitude of over six thousand feet. In the day-time you felt that you had got high up, near to the sun, but the early mornings and evenings were limpid and restful, and the nights were cold.

The geographical position, and the height of the land combined to create a landscape that had not its like in all the world. There was no fat on it and no luxuriance anywhere; it was Africa distilled up through six thousand feet, like the strong and refined essence of a continent. The colours were dry and burnt, like the colours in pottery. The trees had a light delicate foliage, the structure of which was different from that of the trees in Europe; it did not grow in bows or cupolas, but in horizontal layers, and the formation gave to the tall solitary trees a likeness to the palms, or a heroic and romantic air like fullrigged ships with their sails furled, and to the edge of a wood a strange appearance as if the whole wood were faintly vibrating. Upon the grass of the great plains the crooked bare old thorn-trees were scattered, and the grass was spiced like thyme and bog-myrtle; in some places the scent was so strong, that it smarted in the nostrils. All the flowers that you found on the plains, or upon the creepers and liana in the native forest, were diminutive like flowers of the downs,—only just in the beginning of the long rains a number of big, massive heavy-scented lilies sprang out on the plains. The views were immensely wide. Everything that you saw made for greatness and freedom, and unequalled nobility.

The chief feature of the landscape, and of your life in it, was the air. Looking back on a sojourn in the African highlands, you are struck by your feeling of having lived for a time up in the air. The sky was rarely more than pale blue or violet, with a profusion of mighty, weightless, ever-changing clouds towering up and sailing on it, but it has a blue vigour in it, and at a short distance it painted the ranges of hills and the woods a fresh deep blue. In the middle of the day the air was alive over the land, like a flame burning; it scintillated, waved and shone like running water, mirrored and doubled all objects, and created great Fata Morgana. Up in this high air you breathed easily, drawing in a vital assurance and lightness of heart. In the highlands you woke up in the morning and thought: Here I am, where I ought to be.

The Mountain of Ngong stretches in a long ridge from North to South, and is crowned with four noble peaks like immovable darker blue waves against the sky. It rises eight thousand feet above the Sea, and to the East two thousand feet above the surrounding country; but to the West the drop is deeper and more precipitous,—the hills fall vertically down towards the Great Rift Valley.

The wind in the highlands blows steadily from the North-North-East. It is the same wind that, down at the coasts of Africa and Arabia, they name the Monsoon, the East Wind, which was King Solomon’s favourite horse. Up here it is felt as just the resistance of the air, as the Earth throws herself forward into space. The wind runs straight against the Ngong Hills, and the slopes of the hills would be the ideal place for setting up a glider, that would be lifted upwards by the currents, over the mountain top. The clouds, which were travelling with the wind, struck the side of the hill and hung round it, or were caught on the summit and broke into rain. But those that took a higher course and sailed clear of the reef, dissolved to the West of it, over the burning desert of the Rift Valley. Many times I have from my house followed these mighty processions advancing, and have wondered to see their proud floating masses, as soon as they had got over the hills, vanish in the blue air and be gone.

The hills from the farm changed their character many times in the course of the day, and sometimes looked quite close, and at other times very far away. In the evening, when it was getting dark, it would first look, as you gazed at them, as if in the sky a thin silver line was drawn all along the silhouette of the dark mountain; then, as night fell, the four peaks seemed to be flattened and smoothened out, as if the mountain was stretching and spreading itself.