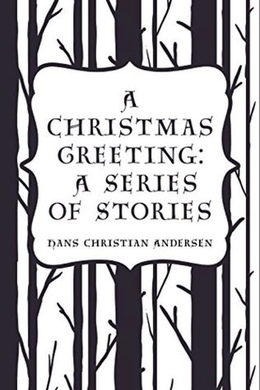 A Series of Stories

During a visit with Chalse Dickens in England, there sprung forth–as the flowers spring forth in the forest–these short stories for the festive season, five of which were previously unpublished upon release. A Christmas greeting sent to Dickens. Contents: The Old House, The Drop of Water, The Happy Family, The Story of a Mother, The False Collar, The Shadow, The Old Street-Lamp, The Dream of Little Tuk, The Naughty Boy, The Two Neighboring Families, The Darning Needle, The Little Match-Girl, The Red Shoes.

In the street, up there, was an old, a very old house,–it was almost three hundred years old, for that might be known by reading the great beam on which the date of the year was carved: together with tulips and hop-binds there were whole verses spelled as in former times, and over every window was a distorted face cut out in the beam. The one story stood forward a great way over the other; and directly under the eaves was a leaden spout with a dragon’s head; the rain-water should have run out of the mouth, but it ran out of the belly, for there was a hole in the spout.

All the other houses in the street were so new and so neat, with large window-panes and smooth walls, one could easily see that they would have nothing to do with the old house: they certainly thought, “How long is that old decayed thing to stand here as a spectacle in the street? And then the protecting windows stand so far out, that no one can see from our windows what happens in that direction! The steps are as broad as those of a palace, and as high as to a church tower. The iron railings look just like the door to an old family vault, and then they have brass tops,–that’s so stupid!”

On the other side of the street were also new and neat houses, and they thought just as the others did; but at the window opposite the old house there sat a little boy with fresh rosy cheeks and bright beaming eyes: he certainly liked the old house best, and that both in sunshine and moonshine. And when he looked across at the wall where the mortar had fallen out, he could sit and find out there the strangest figures imaginable; exactly as the street had appeared before, with steps, projecting windows, and pointed gables; he could see soldiers with halberds, and spouts where the water ran, like dragons and serpents. That was a house to look at; and there lived an old man, who wore plush breeches; and he had a coat with large brass buttons, and a wig that one could see was a real wig. Every morning there came an old fellow to him who put his rooms in order, and went on errands; otherwise, the old man in the plush breeches was quite alone in the old house. Now and then he came to the window and looked out, and the little boy nodded to him, and the old man nodded again, and so they became acquaintances, and then they were friends, although they had never spoken to each other,–but that made no difference. The little boy heard his parents say, “The old man opposite is very well off, but he is so very, very lonely!”

The Sunday following, the little boy took something, and wrapped it up in a piece of paper, went down stairs, and stood in the doorway; and when the man who went on errands came past, he said to him–

“I say, master! will you give this to the old man over the way from me? I have two pewter soldiers–this is one of them, and he shall have it, for I know he is so very, very lonely.”

And the old errand man looked quite pleased, nodded, and took the pewter soldier over to the old house. Afterwards there came a message; it was to ask if the little boy himself had not a wish to come over and pay a visit; and so he got permission of his parents, and then went over to the old house.

And the brass balls on the iron railings shone much brighter than ever; one would have thought they were polished on account of the visit; and it was as if the carved-out trumpeters–for there were trumpeters, who stood in tulips, carved out on the door–blew with all their might, their cheeks appeared so much rounder than before. Yes, they blew–“Trateratra! the little boy comes trateratra!”–and then the door opened.

The whole passage was hung with portraits of knights in armor, and ladies in silken gowns; and the armor rattled, and the silken gowns rustled! And then there was a flight of stairs which went a good way upwards, and a little way downwards, and then one came on a balcony which was in a very dilapidated state, sure enough, with large holes and long crevices, but grass grew there and leaves out of them altogether, for the whole balcony outside, the yard, and the walls, were overgrown with so much green stuff, that it looked like a garden; but it was only a balcony. Here stood old flower-pots with faces and asses’ ears, and the flowers grew just as they liked. One of the pots was quite overrun on all sides with pinks, that is to say, with the green part; shoot stood by shoot, and it said quite distinctly, “The air has cherished me, the sun has kissed me, and promised me a little flower on Sunday!–a little flower on Sunday!”

And then they entered a chamber where the walls were covered, with hog’s leather, and printed with gold flowers.

And there stood easy chairs, with such high backs, and so carved out, and with arms on both sides. “Sit down! sit down!” said they. “Ugh! how I creak; now I shall certainly get the gout, like the old clothes-press, ugh!”