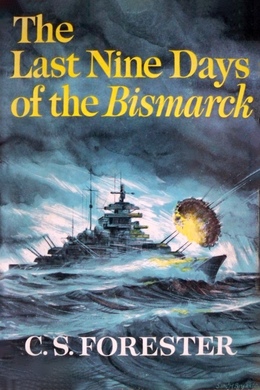 The Last Nine Days of the Bismarck

In 1941, Hitler’s deadly Bismarck, the fastest battleship afloat, broke out into the Atlantic. Its mission: to cut the lifeline of British shipping and win the war with one mighty blow. How the Royal Navy tried to meet this threat and its desperate attempt to bring the giant Bismarck to bay is the story C. S. Forester tells with mounting excitement and suspense.

Now at this moment, when Britain’s resources and will to survive were being strained to the utmost, preparations were being made to strike another blow against her lifelines. The battleship Bismarck was making ready in Kiel harbour to proceed to sea after a prolonged period of training and working up in the Baltic. The largest, the most dangerous, the most modern ship of war yet launched. She was completing her stores, cramming herself as full as her store-rooms and her shell-rooms and her bunkers would hold. There was meat for her refrigerators and flour and vegetables for her food lockers; oil for her bunkers, fresh water for her tanks, and, above all, shells for her magazines. A fussy little steam train brought up a long train of trucks alongside the ship, each laden with the monstrous fifteen-inch shells, three-quarters of a ton each, deadly even in appearance, for the ship’s crane to lift and swing into the air, down, down, down, through deck after deck, into the shell-rooms far below water-line. While this was going on a new contingent came marching along the wharf to reinforce–or at least to augment–the ship’s company. It was a detachment of young naval officers, very young indeed, hardly more than boys. They were newly promoted cadets, proud of their new status and their new uniforms, swinging briskly and proudly in formation to the gangway leading down from the ship’s side; the band which had preceded them so far halted at the foot and continued to play as the young men turned with military precision to march up the gangway, saluting as they reached the quarter-deck, the senior officer saluting the officer of the watch and reporting the arrival of his party on board. A word of command brought them into formation facing the bridge at the moment when the work on the dockside was completed. The officer on the dock supervising the loading of the ammunition shouted ‘Last one!’

‘Last one’ echoed the officer on the deck, waving one finger in reply to the finger waved to him. The last fifteen-inch shell, grim and ugly, swung up in the crane to make its descent into the shell-room. The busy gangs of workers on the dockside melted away; the band, still playing, marched off towards the gate, its music dying away slowly. Admiral Lutjens, brisk, efficient, and active, came out of his sea cabin and made his way to the loudspeaker on the bridge. Only the sailors standing by the lines remained, apparently.

‘Gentlemen!’ he began his speech, as the young officers stiffened to attention to hear him, listening enthralled. The words he uttered were carried throughout the ship by the public address system. He welcomed the young officers aboard, and he explained to them that they had been expressly detailed to make this voyage by the highest authority, so that on their return they would disseminate through the Navy the details of the triumphs they had witnessed. They were in the newest and most powerful battleship afloat, and they were going to experience high adventure. There was no ship in the British Navy that could face them in single combat; there was no large ship that could escape them. Four months of harsh training in the Baltic had made it the most efficient ship in the world. British convoys covered the Atlantic–Bismarck could make short work of convoys and escorts with the aid of the Prinz Eugen, accompanying them on this voyage of honour. The Queen Elizabeth and the Queen Mary, the pride of Britain, were crossing the Atlantic over and over again without escort, relying on their speed. Bismarck was faster than them. What would the world say when the news came out of the sinking of the Queen Mary with ten thousand troops on board? One or two blows like that and England would not dare to send a merchant ship to sea. For as long as Bismarck could maintain herself in the Atlantic England’s commerce would be disrupted, and the British people, shattered and shaken already by the blitz, would starve. He had already ranged the whole length of the Atlantic in command of the battle cruisers Scharnhorst and Gneisenau, and then had sunk a quarter of a million tons of British shipping. A quarter of a million tons. Now they could set themselves a target to aim at of two million tons, dealing a blow from which England could never recover.