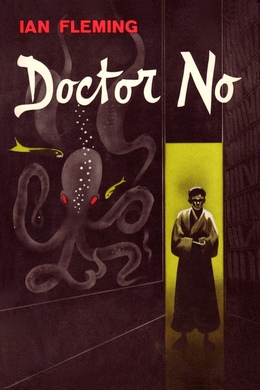 Dr Julius No is a man with a mysterious past. Nobody knows what secrets are hidden on his Caribbean island, and all those who have attempted to investigate further have disappeared. When two British agents go missing in Jamaica, Bond is sent to investigate. Battling the Doctor’s twin obsessions with power and pain, he uncovers the true nature of his opponent’s covert operation - but he must undergo a deadly assault course before he can destroy the Doctor’s plans once and for all.

Punctually AT six o’clock the sun set with a last yellow flash behind the Blue Mountains, a wave of violet shadow poured down Richmond Road, and the crickets and tree frogs in the fine gardens began to zing and tinkle.

Apart from the background noise of the insects, the wide empty street was quiet. The wealthy owners of the big, withdrawn houses—the bank managers, company directors and top civil servants—had been home since five o’clock and they would be discussing the day with their wives or taking a shower and changing their clothes. In half an hour the street would come to life again with the cocktail traffic, but now this very superior half mile of ‘Rich Road’, as it was known to the tradesmen of Kingston, held nothing but the suspense of an empty stage and the heavy perfume of night-scented jasmine.

Richmond Road is the ‘best’ road in all Jamaica. It is Jamaica’s Park Avenue, its Kensington Palace Gardens, its Avenue D’Iéna. The ‘best’ people live in its big old-fashioned houses, each in an acre or two of beautiful lawn set, too trimly, with the finest trees and flowers from the Botanical Gardens at Hope. The long, straight road is cool and quiet and withdrawn from the hot, vulgar sprawl of Kingston where its residents earn their money, and, on the other side of the T-intersection at its top, lie the grounds of King’s House, where the Governor and Commander-in-Chief of Jamaica lives with his family. In Jamaica, no road could have a finer ending.

On the eastern corner of the top intersection stands No. 1 Richmond Road, a substantial two-storey house with broad white-painted verandas running round both floors. From the road a gravel path leads up to the pillared entrance through wide lawns marked out with tennis courts on which this evening, as on all evenings, the sprinklers are at work. This mansion is the social Mecca of Kingston. It is Queen’s Club, which, for fifty years, has boasted the power and frequency of its black-balls.

Such stubborn retreats will not long survive in modern Jamaica. One day Queen’s Club will have its windows smashed and perhaps be burned to the ground, but for the time being it is a useful place to find in a sub-tropical island—well run, well staffed and with the finest cuisine and cellar in the Caribbean.

At that time of day, on most evenings of the year, you would find the same four motor cars standing in the road outside the club. They were the cars belonging to the high bridge game that assembled punctually at five and played until around midnight. You could almost set your watch by these cars. They belonged, reading from the order in which they now stood against the kerb, to the Brigadier in command of the Caribbean Defence Force, to Kingston’s leading criminal lawyer, and to the Mathematics Professor from Kingston University. At the tail of the line stood the black Sunbeam Alpine of Commander John Strangways, RN (Ret.), Regional Control Officer for the Caribbean—or, less discreetly, the local representative of the British Secret Service.

Just before six-fifteen, the silence of Richmond Road was softly broken. Three blind beggars came round the corner of the intersection and moved slowly down the pavement towards the four cars. They were Chigroes—Chinese Negroes—bulky men, but bowed as they shuffled along, tapping at the kerb with their white sticks. They walked in file. The first man, who wore blue glasses and could presumably see better than the others, walked in front holding a tin cup against the crook of the stick in his left hand. The right hand of the second man rested on his shoulder and the right hand of the third on the shoulder of the second. The eyes of the second and third men were shut. The three men were dressed in rags and wore dirty jippa-jappa baseball caps with long peaks. They said nothing and no noise came from them except the soft tapping of their sticks as they came slowly down the shadowed pavement towards the group of cars.

The three blind men would not have been incongruous in Kingston, where there are many diseased people on the streets, but, in this quiet rich empty street, they made an unpleasant impression. And it was odd that they should all be Chinese Negroes. This is not a common mixture of bloods.

In the cardroom, the sunburned hand reached out into the green pool of the centre table and gathered up the four cards. There was a quiet snap as the trick went to join the rest. “Hundred honours,” said Strangways, “and ninety below!” He looked at his watch and stood up. “Back in twenty minutes. Your deal, Bill. Order some drinks. Usual for me. Don’t bother to cook a hand for me while I’m gone. I always spot them.”

Bill Templar, the Brigadier, laughed shortly. He pinged the bell by his side and raked the cards in towards him. He said, “Hurry up, blast you. You always let the cards go cold just as your partner’s in the money.”