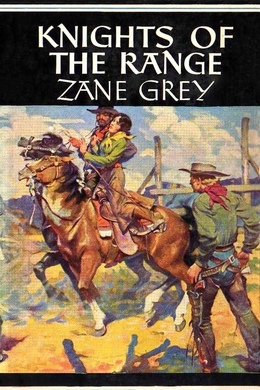 Knights of the Range

The sun set across the purple sky over the Don Carlos Rancho while the warm Santa Fe breeze rustled through the grazing fields just off the trail. The Colonel sat on his porch, staring over the whole scene, pondering the seemingly-doomed future of his prized cattle ranch. “Another spell with my heart like this last one will kill me,” he said nervously to his right-hand man, Britt. Afraid it would break her, the Colonel kept his condition from his alienated daughter, Holly—who was shipped off to boarding school in the East at the tender age of eight. The Colonel would settle for nothing less than the best education for his daughter. Not to mention, the West—crawling with outlaws, thieves, and greed—was no place for a naïve, young woman. However, in the wake of the Colonel’s death, Holly is forced to return and take the reins of her father’s beloved cattle empire. In the midst of hordes of outlaws ransacking the ranch and antagonizing their stock, the heiress must learn the ways of the West alongside the Captain Britt, in an attempt to salvage what’s left of her father’s dream.

Colonel Lee Ripple sat on the porch of his ranch-house in eastern New Mexico, facing that famous fan-shaped scene that lay between the great timbered escarpments stretching down over the green and gray terraces to the vast rolling plain below, through which the Old Trail followed the shining way of the Cimarron into the purple distance.

It was the grandest scene in all New Mexico, and the sad blue eyes of the cattle baron lingered long there before shifting round to the west, where a splendour of range empire unfolded to his gaze. A million acres swept and waved on all sides to the silver slopes, and these in turn sheered up to the black-belted mountains with their snowy peaks.

“Wal, Kurnel, I heahed you, shore, but I’d like to get oot of takin’ you serious,” said Britt, the rancher’s foreman, who sat on the porch steps.

“Cap, you must take me seriously,” replied Ripple, in slow grave speech. “Another spell with my heart like this last one will kill me.”

“Aw, I cain’t believe it,” rejoined Britt, stubbornly, despite the something convincing in his employer’s tone and look.

“I know, Cap. I thought this second attack would do for me. My heart has acted queer for a long time. But that spell in San Antonio was the first bad one. I consulted a doctor. He told me to make my will and get ready. But scared as I was, I didn’t obey. I went on to New Orleans after Holly, and fetched her home without tellin’ her aboot it. I just couldn’t tell her.”

“No wonder, boss. Thet would have been plumb hard on the lass,” replied Britt, wagging his lean, hawk-like head. “You sent her to thet school when she was eight years old. An’ you went to see her half a dozen times in these nine years she’s been gone. An’ when you was fetchin’ her heah to Don Carlos’ Rancho, the only home she ever had—to tell her you was aboot to die—Aw! thet would have been cruel!”

“You’re right,” agreed the Colonel, bitterly, as he spread his hands with a hopeless gesture. “That mawnin’ when I met her and told her I had come to take her home she was so happy, so radiant. I couldn’t kill her joy…. But now, Britt, she must be told at once.”

“Why, boss? You know how onsartin life is. Quien sabe? You might live long yet.”

“Yes. It’s possible. But not probable. And I want her to make her choice while I am living.”

“Choice of what, Kurnel, if I may make bold to ask?”

“Whether or not she will live heah or go to her Mother’s people in Santone.”

“Did she say so?” asked Ripple, eagerly, his gray eyes full of soft warm light.

“No. But I’d gamble on it. These few days Holly has been here she’s been plumb loco aboot the ranch. Why, she has been wild with joy. Boss, she’s like a freed bird. An’ she loves it all, particular the hawses. She’s crazy aboot hawses. An’ she’s never been in a saddle yet. Think of thet, Lee Ripple. Heah’s a girl of sixteen, granddaughter of old Don Carlos, the greatest of all the old hawse-breedin’ dons—an’ she’s never straddled a hawse.”

“I know—I know, Cap. Don’t rub it in. I always meant Holly to have all the West could offer. But first I wanted her to get an education. The years have slipped by…. So my lass loves horses!—What did she say?”

“Wal, the lass has yore blood in her, same as thet of the Valverde. She asked me how many hawses we had. An’ when I told her aboot four hundred thet we knowed of she squealed with joy. Swore she’d ride every one of them…. Lord, I see my troubles. But I’ll teach Holly to ride. I shore won’t leave thet to these saddle rowdies.”

“Britt, you make me hope,” returned the Colonel, feelingly, as he lay back in the great rocker. “I always wanted a son. But I never loved Holly the less for that…. If she lived on heah, and learned to run this ranch under your wise eye, and some day married one of these saddle rowdies—I could die happy.”

“My Gawd, boss!” expostulated Britt, heatedly. “Why’d you ever send Holly away to make a fine lady oot of her if you wanted her to marry one of these firebrands?”

“Cap, could Holly do better? I mean if this lucky cowboy is one of the breed we know so well. Not a Texan! Holly is half Spanish and you know Texans will be long forgettin’ the Alamo…. He must be of good family and have some little schoolin’. For the rest, I don’t care so much. Holly could make most any cowboy take his place in the makin’ of the West…. They are the salt of the earth, these wild range riders. Without them there would never have been this cattle business growin’ by leaps and bounds, destined to tame the frontier. You know, Britt, even better than I do. For five years you’ve handled these hard-ridin’, hard-drinkin’, hard-shootin’ devils of mine. And you have loved them.”