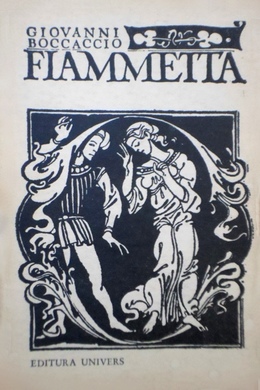 The Elegy of Lady Fiammetta

A milestone in feminist literature, this marvelous European romance, narrated by a woman, is considered the first psychological novel in a modern language and a precursor of stream-of-consciousness fiction. Lady Fiammetta, the first-person narrator and protagonist, recounts how, although a married woman, she falls in love with a handsome young foreigner named Panfilo and, driven by irresistible passion, becomes his lover. Panfilo subsequently abandons Fiammetta and returns to his native land, where his elderly father is said to be dying. When he fails to keep his promise to return, Fiammetta, in what is the heart of the narrative, describes her longings, her anguish, and her despair.

In the time when the newly–vestured earth appears more lovely than during all the rest of the year came I into the world, begotten of noble parents and born amid the unstinted gifts of benignant fortune. Accursed be the day, to me more hateful than any other, on which I was born! Oh, how far more befitting would it have been had I never been born, or had I been carried from that luckless womb to my grave, or had I possessed a life not longer than that of the teeth sown by Cadmus, or had Atropos cut the thread of my existence at the very hour when it had begun! Then, in earliest childhood would have been entombed the limitless woes that are the melancholy occasion of that which I am writing. But what boots it to complain of this now? I am here, beyond doubt; and it has pleased and even now pleases God that I should be here. Born and reared, then, amid boundless affluence, I learned under a venerable mistress whatever manners and refinements it beseems a demoiselle of high rank to know. And as my person grew and developed with my increasing years, so also grew and developed my beauty. Alas! even while a child, on hearing that beauty acclaimed of many, I gloried therein, and cultivated it by ingenious care and art. And when I had bidden farewell to childhood, and had attained a riper age, I soon discovered that this, my beauty —ill–fated gift for one who desires to live virtuously!—had power to kindle amorous sparks in youths of my own age, and other noble persons as well, being instructed thereupon by nature, and feeling that love can be quickened in young men by beauteous ladies. And by divers looks and actions, the sense of which I did but dimly discern at the time, did these youths endeavor in numberless ways to kindle in my heart the fire wherewith their own hearts glowed—fire that was destined, not to warm, but rather to consume me also in the future more than it ever has burned another woman; and by many of these young men was I sought in marriage with most fervid and passionate entreaty. But after I had chosen among them one who was in every respect congenial to me, this importunate crowd of suitors, being now almost hopeless, ceased to trouble me with their looks and attentions. I, therefore, being satisfied, as was meet, with such a husband, lived most happily, so long as fervid love, lighted by flames hitherto unfelt, found no entrance into my young soul. Alas! I had no wish unsatisfied; nothing that could please me or any other lady ever was denied me, even for a moment. I was the sole delight, the peculiar felicity of a youthful spouse, and, just as he loved me, so did I equally love him. Oh, how much happier should I have been than all other women, if the love for him that was then in my heart had endured!

It was, then, while I was living in sweet content, amid every kind of enjoyment, that Fortune, who quickly changes all things earthly, becoming envious of the very gifts which she herself had bestowed, withdrew her protecting hand. At first uncertain in what manner she could succeed in poisoning my happiness, she at length managed, with subtle craft, to make mine own very eyes traitors and so guide me into the path that led to disaster. But the gods were still propitious to me, nay, were even more concerned for my fate than I myself. Having seen through her veiled malice, they wished to supply me with weapons, had I but known how to avail me thereof, wherewith I might fend my breast, and not go unarmed to the battle wherein I was destined to fall. Yea, on the very night that preceded the day which was the beginning of all my woes, they revealed to me the future in my sleep by means of a clear and distinct vision, in such wise as follows:

While lying on my spacious couch, with all my limbs relaxed in deepest slumber, I seemed to be filled with greater joy than I had ever felt before, and wherefore I knew not. And the day whereon this happened was the brightest and loveliest of days. I was standing alone in verdant grass, when, with the joy whereof I spoke, came the thought to me that it might be well for me to repose in a meadow that appeared to be shielded from the fervid rays of the sun by the shadows cast by various trees newly garbed in their glossy foliage. But first, gathering divers flowers, wherewith the whole sward was bejeweled, I placed them, with my white hands, in a corner of my robe, and then, sitting down and choosing flower after flower, I wove therefrom a fair garland, and adorned my head with it.