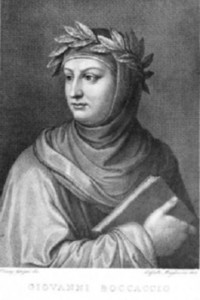 Giovanni Boccaccio was an Italian author and poet, a friend, student, and correspondent of Petrarch, an important Renaissance humanist and the author of a number of notable works including the Decameron, On Famous Women, and his poetry in the Italian vernacular. Boccaccio is particularly notable for his dialogue, of which it has been said that it surpasses in verisimilitude that of just about all of his contemporaries, since they were medieval writers and often followed formulaic models for character and plot. (source: Wikipedia)

In the summer of 1348, with the plague ravaging Florence, ten young men and women take refuge in the countryside, where they entertain themselves with t...read more »

A milestone in feminist literature, this marvelous European romance, narrated by a woman, is considered the first psychological novel in a modern langua...read more »