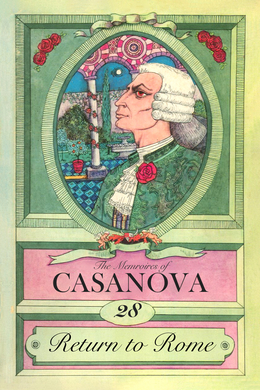 Rome, and the Actor’s Punishment. My Amours with Gallimena and then the journey to Soyento. The Florentines are mocked by the King. My Journey to Salerno before returning to Naples. Finally my arrival at Rome where I meet Margarita and Madame Buondcorsi. I Sup at the Inn With Armelline and Emilie. The Florentine and the marriage of Emilie, and Armelline at the ball.

As I fell over the Englishman I had struck my hand against a nail, and the fourth finger of my left hand was bleeding as if a vein had been opened. Betty helped me to tie a handkerchief around the wound, while Sir B—- M—- read the letter with great attention. I was much pleased with Betty’s action, it shewed she was confident, and sure of her lover’s forgiveness.

I took up my coat and carpet-bag, and went into the next room to change my linen, and dress for dinner. Any distress at the termination of my intrigue with Betty was amply compensated for by my joy at the happy ending of a troublesome affair which might have proved fatal for me.

I dressed myself, and then waited for half an hour, as I heard Betty and Sir B—- M—- speaking in English calmly enough, and I did not care to interrupt them. At last the Englishman knocked at my door, and came in looking humble and mortified. He said he was sure I had not only saved Betty, but had effectually cured her of her folly.

“You must forgive my conduct, sir,” said he, “for I could not guess that the man I found with her was her saviour and not her betrayer. I thank Heaven which inspired you with the idea of catching hold of me from behind, as I should certainly have killed you the moment I set eyes on you, and at this moment I should be the most wretched of men. You must forgive me, sir, and become my friend.”

I embraced him cordially, telling him that if I had been in his place I should have acted in a precisely similar manner.

We returned to the room, and found Betty leaning against the bed, and weeping bitterly.

The blood continuing to flaw from my wound, I sent for a surgeon who said that a vein had been opened, and that a proper ligature was necessary.

Betty still wept, so I told Sir B—- M—- that in my opinion she deserved his forgiveness.

“Forgiveness?” said he, “you may be sure I have already forgiven her, and she well deserves it. Poor Betty repented directly you shewed her the path she was treading, and the tears she is shedding now are tears of sorrow at her mistake. I am sure she recognizes her folly, and will never be guilty of such a slip again.”

Emotion is infectious. Betty wept, Sir B—- M—- wept, and I wept to keep them company. At last nature called a truce, and by degrees our sobs and tears ceased and we became calmer.

Sir B—- M—-, who was evidently a man of the most generous character, began to laugh and jest, and his caresses had great effect in calming Betty. We made a good dinner, and the choice Muscat put us all in the best of spirits.

Sir B—- M—- said we had better rest for a day or two; he had journeyed fifteen stages in hot haste, and felt in need of repose.

He told us that on arriving at Leghorn, and finding no Betty there, he had discovered that her trunk had been booked to Rome, and that the officer to whom it belonged had hired a horse, leaving a watch as a pledge for it. Sir B—- M—- recognized Betty’s watch, and feeling certain that she was either on horseback with her seducer or in the wagon with her trunk, he immediately resolved to pursue.

“I provided myself,” he added, “with two good pistols, not with the idea of using one against her, for my first thought about her was pity, and my second forgiveness; but I determined to blow out the scoundrel’s brains, and I mean to do it yet. We will start for Rome to-morrow.”

Sir B—- M—-‘s concluding words filled Betty with joy, and I believe she would have pierced her perfidious lover to the heart if he had been brought before her at that moment.

“We shall find him at Roland’s,” said I.

Sir B—- M—- took Betty in his arms, and gazed at me with an air of content, as if he would have shewn me the greatness of an English heart- -a greatness which more than atones for its weakness.

“I understand your purpose,” I said, “but you shall not execute your plans without me. Let me have the charge of seeing that justice is done you. If you will not agree, I shall start for Rome directly, I shall get there before you, and shall give the wretched actor warning of your approach. If you had killed him before I should have said nothing, but at Rome it is different, and you would have reason to repent of having indulged your righteous indignation. You don’t know Rome and priestly justice. Come, give me your hand and your word to do nothing without my consent, or else I shall leave you directly.”

Sir B—- M—- was a man of my own height but somewhat thinner, and five or six years older; the reader will understand his character without my describing it.

My speech must have rather astonished him, but he knew that my disposition was benevolent, and he could not help giving me his hand and his pledge.