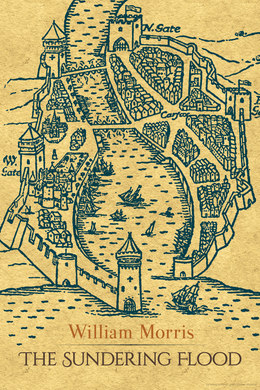 In his final novel, Morris draws upon Icelandic lore to tell a tale of two lovers, Osberne and Elfhild, separated by a broad river. When Elfhild vanishes from the riverbank, Osberne takes up his magical sword Boardcleaver and begins a desperate search. He soon finds himself battling a tyrannical king in the service of rebel knight Sir Godrick of Longshaw, but Osberne can never forget the quest for his lost love. A captivating blend of chivalric romance and wizardry.

It is told that there was once a mighty river which ran south into the sea, and at the mouth thereof was a great and rich city, which had been builded and had waxed and thriven because of the great and most excellent haven which the river aforesaid made where it fell into the sea. And now it was like looking at a huge wood of barked and smoothened fir-trees when one saw the masts of the ships that lay in the said haven.

But up in this river ran the flood of tide a long way, so that the biggest of dromonds and round-ships might fare up it, and oft they lay amid pleasant up-country places, with their yards all but touching the windows of the husbandman’s stead, and their bowsprits thrusting forth amongst the middens, and the routing swine, and querulous hens. And the uneasy lads and lasses sitting at high-mass of the Sunday in the grey church would see the tall masts amidst the painted saints of the aisle windows, and their minds would wander from the mass-hackled priest and the words and the gestures of him, and see visions of far countries and outlandish folk, and some would be heart-smitten with that desire of wandering and looking on new things which so oft the sea-beat board and the wind-strained pine bear with them to the dwellings of the stay-at-homes: and to some it seemed as if, when they went from out the church, they should fall in with St. Thomas of India stepping over the gangway, and come to visit their uplandish Christmas and the Yule-feast of the field-abiders of midwinter frost. And moreover, when the tide failed, and there was no longer a flood to bear the sea-going keels up-stream (and that was hard on an hundred of miles from the sea), yet was this great river a noble and wide-spreading water, and the downlong stream thereof not so heavy nor so fierce but that the barges and lesser keels might well spread their sails when the south-west blew, and fare on without beating; or if the wind were fouler for them, they that were loth to reach from shore to shore might be tracked up by the draught of horses and bullocks, and bear the wares of the merchants to many a cheaping.

Other rivers moreover not a few fell into this main flood, and of the some were no lesser than the Thames is at Abingdon, where I, who gathered this tale, dwell in the House of the Black Canons; blessed be St. William, and St. Richard, and the Holy Austin our candle in the dark! Yea and some were even bigger, so that the land was well furnished both of fisheries and water-ways.

Now the name of this river was the Sundering Flood, and the city at the mouth thereof was called the City of the Sundering Flood. And it is no wonder, considering all that I have told concerning the wares and chaffer that it bore up-country, though the folk of the City and its lands (and the city-folk in special) knew no cause for this name. Nay, oft they jested and gibed and gabbed, for they loved their river much and were proud of it; wherefore they said it was no sunderer but a uniter; that it joined land to land and shore to shore; that it had peopled the wilderness and made the waste places blossom, and that no highway for wheels and beasts in all the land was so full of blessings and joys as was their own wet Highway of the Flood. Nevertheless, as meseemeth that no name is given to any town or mountain or river causeless, but that men are moved to name all steads for a remembrance of deeds that have been done and tidings that have befallen, or some due cause, even so might it well be with the Sundering Flood, and whereas also I wot something of that cause I shall now presently show you the same.

For ye must know that all this welfare of the said mighty river was during that while that it flowed through the plain country anigh the city, or the fertile pastures and acres of hill and dale and down further to the north. But one who should follow it up further and further would reach at last the place where it came forth from the mountains. There, though it be far smaller than lower down, yet is it still a mighty great water, and it is then well two hundred miles from the main sea. Now from the mountains it cometh in three great forces, and many smaller ones, and perilous and awful it is to behold; for betwixt those forces it filleth all the mountain ghyll, and there is no foothold for man, nay for goat, save at a hundred foot or more above the water, and that evil and perilous; and is the running of a winter millstream to the beetles and shrew-mice that haunt the greensward beside it, so is the running of that flood to the sons of Adam and the beasts that serve them: and none has been so bold as to strive to cast a bridge across it.