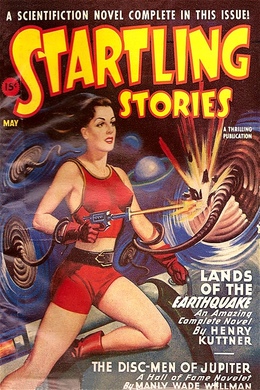 Lands of the Earthquake

William Boyce, in whose veins flows the blood of crusaders, goes on the quest of a lost memory and a mysterious woman in an odd clime where cities move and time stands motionless! Another classic science fiction novel from the American master, Henry Kuttner.

William Boyce lost a year out of his life when he was thirty. One August morning he was walking south of the library on Fifth Avenue, past the stone lions that guard the broad steps, and then suddenly he was in a hospital bed in Bellevue, one year later. A patrolman had found him lying unconscious on one of Central Park’s broad lawns. Boyce came out of Bellevue into Hell.

Amnesia was nothing new. Psychiatrists told Boyce that under treatment his memory would probably return. In the meantime, it would be best to slip back into his familiar grooves of life and pick up where he had so abruptly left off a year ago.

It sounded easy. Boyce tried it. But he had lost all interest in his classes at the university. He was haunted. He developed an obsession. He knew that he had to find out what had happened to the lost year or he could not go on.

Occasionally fleeting flashes of memory would come to him—a man’s swarthy, moustached face, a quiet voice he seemed to know intimately, speaking sometimes in a language that was familiar and yet strange.

Once, in Classics, Boyce heard that tongue spoken—it was a reading from a medieval manuscript in old French, the French of six hundred years ago. But he understood it like his native tongue. That was very strange, he thought….

Then there was a memory of dark figures, robed, moving with an eery litheness that made Boyce shake suddenly all over with sheer terror. That memory always snapped shut almost instantly, as if his mind would allow him only a glimpse. At such times he wondered whether the truth about his lost year might not drive him insane with sheer panic.

But something still drew him resistlessly to that lost time. He thought that it was linked somehow with the crystal he had found in his pocket upon his release from Bellevue. It was not a large crystal, but it was cut in a way he had never seen before. Some of its facets were concave, others were convex. It was perfectly transparent. And he felt—uncomfortable—when he did not have it in his pocket. He could not have said why.

Time passed—a year, full of restlessness and uncertainty. More and more of his days he spent wandering through the city, searching and searching, with no knowledge of what he sought. He was beginning to drink—too much, and more than too much.

The district near the East River, far south of mid-town, seemed to have the deepest attraction for him. Sometimes, hazy with whiskey, he would roam the silent streets, his hand in his pocket clenched on the crystal that seemed cold against his palm with a chill of its own, never taking warmth from his touch. Louder and louder, more and more insistently, that silent voice from his lost year was calling him.

The man’s dark face—that among many things floated before him more often than before. It was not the face itself that mattered, he began to realize. The face was more a key to some secret than anything of intrinsic value. And it was not even a living face, but a pictured one….

One day he saw that face in reality. He followed the man at a distance, through streets that grew familiar…. At last he was left standing in front of an ancient, narrow brownstone house by the East River—indeed, its rear windows must have looked on the river. As he watched the man unlock the door and enter the house, he knew, without knowing why, that this was the place which had been drawing him for so long.

The muscles on his jaw tightened under the stubble of his beard. He crossed the street, mounted the low flight of steps, and stood waiting, not quite daring to ring the bell. Then, scowling, he thrust his finger forward.

After a moment the door opened. Blind wings of panic beat in Boyce’s chest. He thrust forward, and the man facing him gave ground, his face darkening with suspicion.

Boyce’s gaze went beyond him. He knew this dark long hall somehow, as he knew the stairway that went up into gloom, and the other one that led down.

“What do you want?” the man said sharply. “Who’re you looking for?”

“Boyce?” Sharp eyes searched his. Again the quick suspicion flared. “Heck, no! Listen, mister—just what do you want? I don’t know you.”

“Two years ago—I’ve changed a lot, probably, but not so much that you can’t remember me.”

“I never saw you before in my life.”

“How long have you lived here?”

“I know this house!” Boyce said desperately. “Over there’s the living-room, with the fireplace.” He moved so quickly that the other was left behind. In a second Boyce was through a curtained archway and staring around a cluttered, gloomy room—a room he knew!